A day in the life with Bruno the Boxer. 2 years 7 months—99 pounds, 24 1/2 inches from the ground to the highest point of the shoulders (the withers). 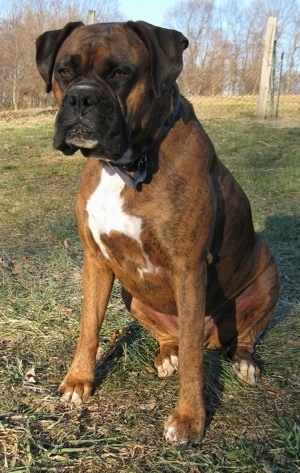 Allie the Boxer has changed her ways. She is 8 years old and she no longer picks fights with other dogs. I have learned what signs to watch for, what body language would mean trouble and what the good signs are. These pictures show all good signs. 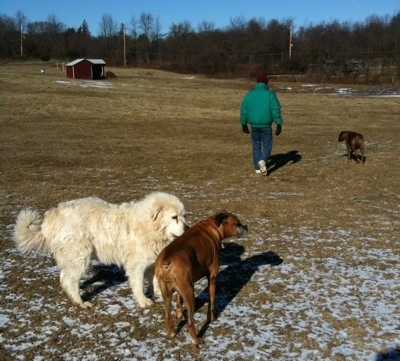 When Tacoma the Great Pyrenees starts to smell her from the front Allie the Boxer turns her head away to avoid eye contact. When a dog turns its head away and avoids eye contact it is telling you it does not wish to challenge you. Notice Tacoma's tail; it is middle-of-the-road and somewhat relaxed. Her ears are slightly back. This tells me Tacoma means no harm to Allie. Allie's ears are also slightly back and her tail is not straight up. All of these signs tell me that neither dog has any intention of attacking at the moment. 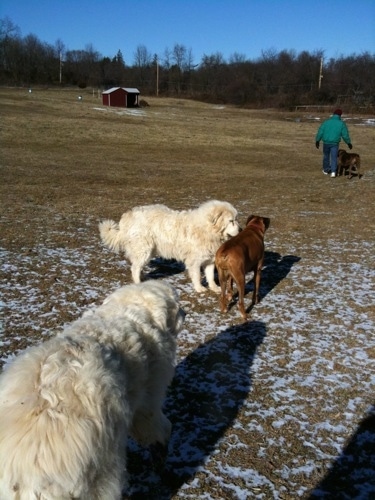 Allie allowing herself to be smelled 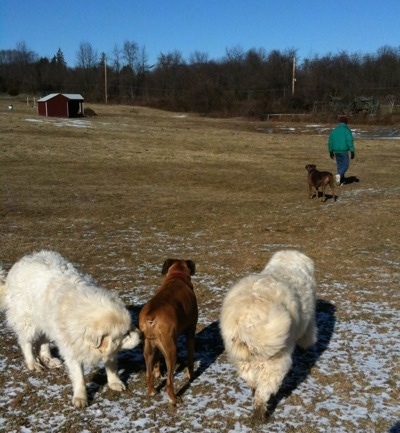 Allie allows herself to be smelled from behind. 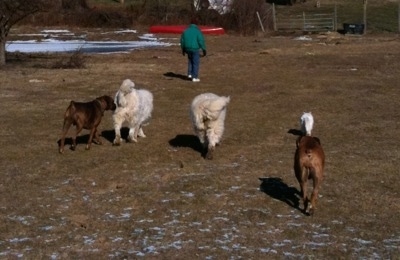 When the Great Pyrenees walk away Allie does not try and get in front of them. She follows. See the white cat to the right? That is Kung Fu Kitty. 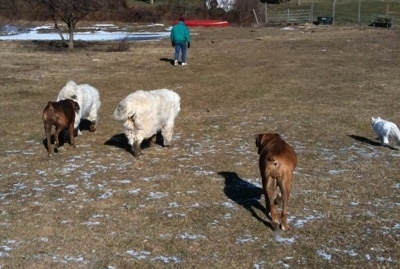 Notice how all four of the dogs have their heads lowered while walking. A dog in a dominant state of mind raises its head high and proud trying to make itself bigger. None of the dogs are trying to dominate. 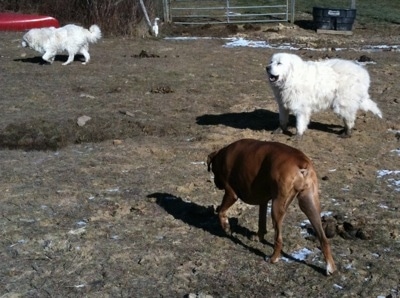 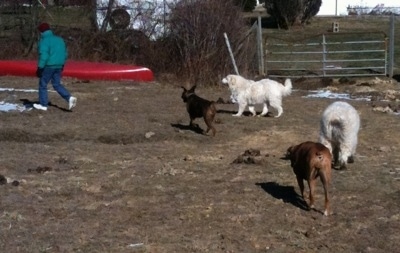 Even with Bruno running around like a crazy pup does not excite Allie into a dominant state. Her head is still low. It was very important that I, as the pack leader to all of these dogs, did not think about a dog fight and was not nervous or worried about it. Had I been, it would have put the dogs in a different mind-set. They would have felt my energy and saw me as weak and one of the dogs may have decided to take over.

This transformation is amazing to me. In the past Allie would have attacked both of the white dogs and the white dogs would have teamed up on her. My method of dealing with this in the past was to keep them separated. The dogs would have fence fights and every so often they would accidentally get together. I learned that separating dogs that fight can actually intensify the situation. I took the plunge and decided to work on becoming a strong enough pack leader that all dogs respected me enough to give the position to me and not challenge one another. The hardest part for me was getting the image of them fighting out of my mind. I admit it took some time and was not easy for me, however the mission has been accomplished. Allie the Boxer is 8 years old, Tundra the Great Pyrenees is 8 years old and Tacoma the Great Pyrenees is 7 years old. Dogs are never too old to change their ways. I do realize, however that I will have to continue to be a strong pack leader to all four dogs in order to keep it this way, including pack walking them together and watching for any signs of dominance and putting a stop to it.

Bruno had a great time at the dog park. I, as his owner, was watching the dogs very closely to make sure everyone got along well. I was making a mental note of all of the more submissive dogs and all of the more dominant dogs. We had not been to a dog park in a long time and I observed something I had never noticed before. Bruno gravitated to the dogs that I had mentally noted were more submissive. 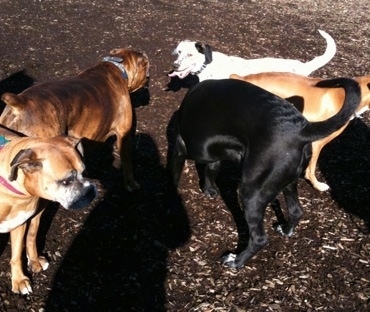 In fact the dogs seemed to have formed two packs. The dogs that were seemingly more dominant were all chasing one another around and the more submissive dogs were playing together. The two groups were very clear. All the submissive dogs stuck together. Dogs can read their own language. Bruno knew which dogs meant no harm and were just playing and which dogs were trying to dominate, I have no doubt about that. What it does tell me is I was assessing the dogs correctly. It was a very educational day. 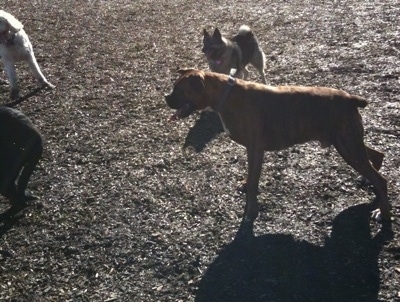 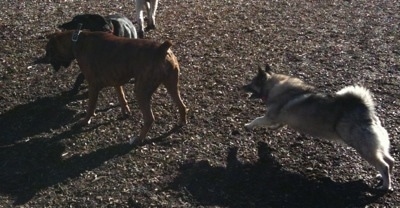