Raising a Puppy: the fourth week in his new home

A day in the life with Bruno the Boxer puppy. Bruno's fourth week—10 weeks old, 17 pounds, 13 inches from the ground to the highest point of the shoulders (the withers). 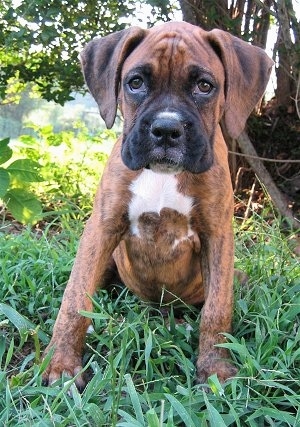 Bruno is starting to get a little more freedom in the house. He tends to stick pretty close to our older Boxer Allie and Allie tends to stick close to me, therefore, I have been allowing Bruno inside without being constantly hovered over, so long as I can see him.

Bruno has learned one of the dog beds is for him. When Allie is on her bed, Bruno likes to be on the other bed. If Bruno is tired, he sleeps on the other bed. If Bruno gets startled, he tries to snuggle in Allie's bed with her. If Bruno is wide awake, and Allie is sleeping, Bruno constantly barks at her, lunging in for a nip at her feet here and there. If Allie is really tired she'll put Bruno in his place, growling and slightly lunging towards him to try and get him to stop. Bruno is relentless; he just keeps going back at her for more. If Allie is in a somewhat playful mood, she will play with Bruno.

Although Bruno likes to lie in this dog bed, he still has to be watched. Recently I left the room for five seconds and when I returned Bruno had my sneaker in the bed with him and he was proceeding to use it as his next chew toy. Another time it was my boot—these are just two of the MANY times Bruno has stolen a shoe! There are teeth marks in my daughter's pink flip flops. When Bruno is caught with a shoe he must be immediately corrected. "No, AAAhhhhtttt!!" He responds well to the firm tone. There have been a few times where he was so hyped up and spastic, he did not respond as I wanted him to, for example if I take the shoe away and he tries to get it back as if it's a game, I have tapped his butt at the same time I use my firm correcting words to get his attention. It's mostly hand signals and tone of voice.

Before I go to bed for the night, Bruno will have to go to his crate. He is not trained well enough to have unsupervised freedom in the house. That would be asking for trouble!

Now that Bruno is getting a tad more freedom, it is time to teach him the "Inside" and "Outside" commands. Meaning, when I want him to go outside, I say, "Outside" and when I want him to come inside, I say, "Inside." This is done by saying the words "inside" or "outside" each and every time you put him in or out. He will eventually relate the command to the action. If I am asking him to come inside and he is not listening, I must go and get him and physically give him a push in the door, letting HIM do the walking; I cannot carry him if I expect him to learn the command. Same with going outside. If I tell him to go outside and he runs away, I need to go and get him and nicely force him to walk out the door while saying the "Bruno, Outside!" command.

Besides the accidents while locked in his crate, Bruno has not gone to the bathroom in the house since the first week we brought him home because we have not given him the opportunity. He is not totally potty trained, however he is making progress. For example, one morning at exactly 10 weeks old, Bruno yipped in his crate. When the crate door was opened he ran from the kitchen into the living room right to the front door and waited to be let outside. Then he ran to the grass and peed! Good boy, Bruno!

The next morning, however, he peed in his crate. I suppose I didn't wake up in time. Puppies at this age can still only hold it in for a certain amount of time. Bruno was not pleased with the wet bedding. He was squished as far front as he could, trying not to step in it and wanting out of his crate.

These two examples show Bruno is starting to get the idea. He seems to know where he needs to go to the bathroom. However, he is young and cannot always hold it, and therefore, cannot be trusted to roam free in the house unsupervised.

At 10 weeks and 3 days old, Bruno was sleeping in the dog bed next to Allie, our other Boxer, while I worked on the computer. Bruno awoke, and walked to the door wanting to go outside. I opened the door and Bruno went outside to pee. It had been raining and it was all wet outside. I could tell Bruno was thinking about peeing right on the porch. I had to lead him to the grass.

At 10 weeks and 4 days old Bruno has been very good at going to the door when he has to go to the bathroom and we have been very good at getting the door open fast so he can go outside. He runs to the grass and does his business. What I don't yet know is, if we did not notice him wanting out, would he bark to go out, or pee on the floor by the door? Hoping he would bark, however he is still only 10 weeks old and I feel lucky that he runs to the door. Therefore we will continue to make sure he is watched and gets let out immediately upon running to the door. What a good puppy! The goal is not to let him start peeing or pooping in the house. Once a dog does, if you do not get it totally cleaned up, he will smell it and you will have a harder time housebreaking.

At 10 weeks and 5 days old, Bruno was playing in the living room when he suddenly squatted and peed on the living room floor. My daughter corrected him in mid-pee, which is what you need to do; catch the dog in the act for him to understand what he did wrong. We had never actually caught him peeing inside before; we were just good at not allowing him to have the chance to pee. Hopefully the correction made some kind of impression on him.

"I Want to Eat Everything I See" Stage

At 10 weeks old, Bruno is at a stage where he wants to eat everything he sees. I don't know how long this stage will last, but I am hoping it will not last that long. Bruno tries to eat leaves, horse poop, pebbles, trash, cigarette butts (we do not smoke, but when we take him out, he always manages to find one!), you name it—he tries to pick it up in his mouth and eat it. "No, DROPPP ITTTT!!!, DROP IT!!!" in that firm tone. Sometimes the tone will work, sometimes I need to open his mouth and dig out whatever it was he found by hand. When I take him for walks I am constantly saying, "No don't eat that!" and steering him away from whatever it was he felt the need to eat at the time. 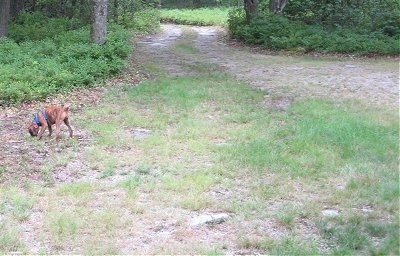 Today Bruno was outside acting very curious about something. I went over to check it out and discovered he was eating wild mushrooms! Not good! I immediately yelled, "NO, DROP IT!" and he did drop it. 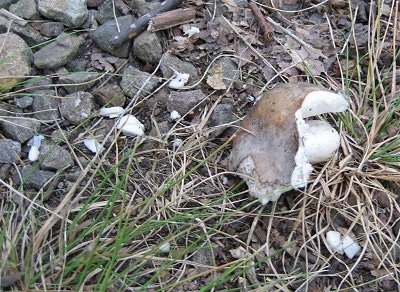 However, I could see part of the mushroom was gone and there were pieces all around the area. Bruno walked away from me and proceeded to look for more mushrooms!

He found one pretty fast and once again I yelled in a firm tone, "NO, DROP IT!" and once again he did drop it. I had to follow him telling him "No" every time he attempted to pick something up with his mouth. We were not at home; we were at our camp site several hours from our house. It was time to leave and Bruno was supposed to be outside going to the bathroom one last time before the long drive home. I was worried about what he had eaten and was watching him closely. 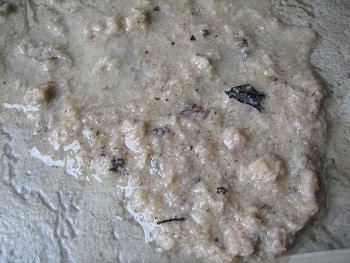 Sure enough, in about an hour Bruno threw up what he had eaten, which was a very good sign that he was going to be OK. His body was getting rid of everything he was not supposed to have eaten. Bruno proceeded to throw up about ten more times over the next three hours. He also had loose stool (his body getting rid of it from the other end as well). What a crazy trip home that was. We had our RV and the first time Bruno had thrown up was while we were eating in a restaurant. Bruno was in the RV inside his crate. Bruno had thrown up and apparently eaten what he threw up! The throw up that had fallen outside the crate, and the wet, slightly soiled bedding let me know he did indeed throw up and eat it. A half hour later he threw it up again. This time I stopped him from eating it. Gross, Bruno! We had to make an emergency stop several times on the way home to walk him or to clean up what he had done in the RV. I knew this was his body getting rid of what he was not supposed to have eaten. Had this gone on for any longer than it did, I would have rushed him to the emergency vet. However, by the time we got home he was fine. If your dog/puppy eats something such as a mushroom or a plant, it is a good idea to save some of what it was they ate in case you have to rush the pet to the vet. You can show the vet what it was they ate. 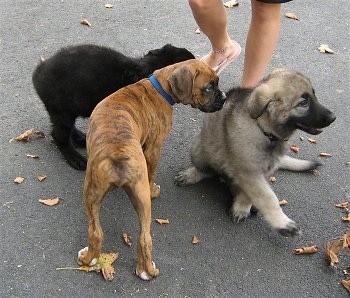 Bruno meets two Shiloh Shepherd puppies, Shadow and Chase. The Shiloh Shepherd pups are 7 weeks old and Bruno is 10 weeks old, yet they are all about the same size. It was a very hot and humid day, with the temperature reaching near 100 degrees. Bruno was hot, but he was not having as hard a time with the heat as the Shepherd pups. Bruno wanted to play with the puppies, however Shadow and Chase were too hot and wanted back into their car, where they remembered the coolness of the AC. We plan on getting Bruno together with Shadow again on a cooler day. Chase was adopted out to a new family.

Just A FEW of the bad-dog moments... 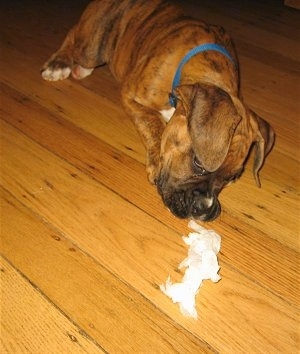 Bruno has started going into the downstairs bathroom and stealing trash out of the trash can. After the second time in one day he stole trash and ran with it, I decided it was time to keep the trash can on top of the back of the toilet where he cannot reach it. 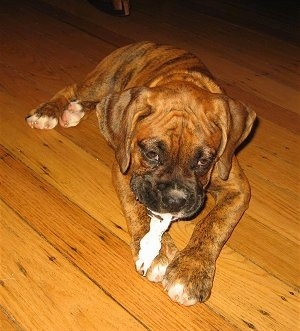 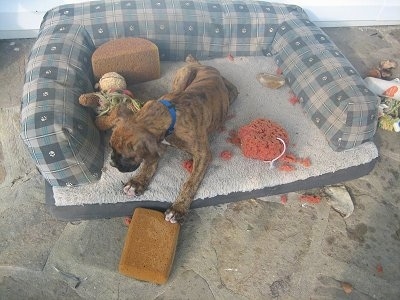 I walked outside only to discover Bruno had stolen some sponges from the horse tack and chewed one of them up. “No, Pup!” Notice he has plenty of his own toys! 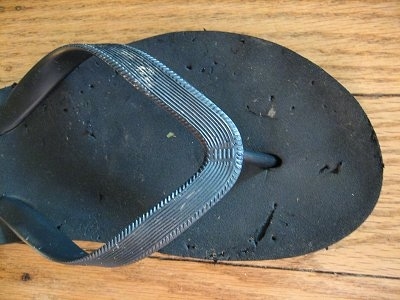 Every time I turn around, it seems Bruno has someone's shoe. He's ruined more than one pair of flip flops. Bad puppy! Bruno, you need a daily walk to drain some of that puppy energy!