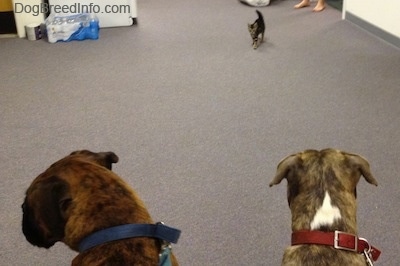 Banjo the kitten had just been rescued from an old flea-ridden horse barn. Bruno and Spencer had seen him from a distance, but we never let the dogs get close enough to really meet Banjo—not until we were sure the fleas were all dead and the ear mites gone. The kitten had been taken right to the deep laundry room sink for the treatments and then had left the house for the night. A couple of days later, when we were sure the kitten didn't have any contagious parasites, we allowed the dogs to meet Banjo.

We walked into the room and I didn't even have time to take the dogs’ leashes off. The kitten started walking over to the dogs. 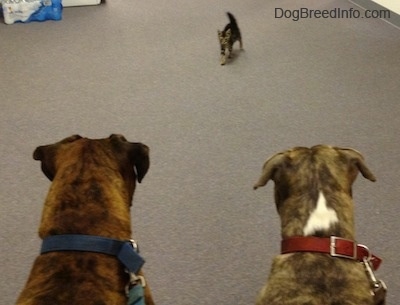 Oh yes, this is one brave kitten. I guess when you are born in a barn with a bunch of horses, a Boxer and a Pit Bull seem like a piece of cake. 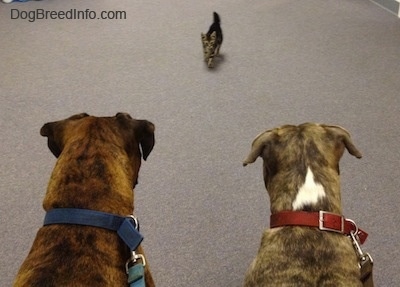 Banjo is getting closer. 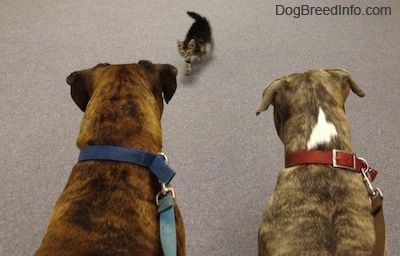 As he gets closer he starts to puff himself out. 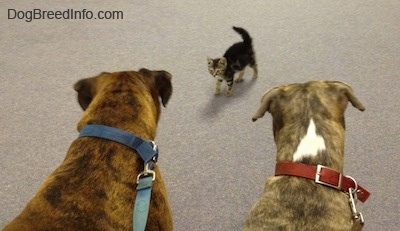 Banjo’s hair is standing on end as he looks at these two creatures that are looking back at him. 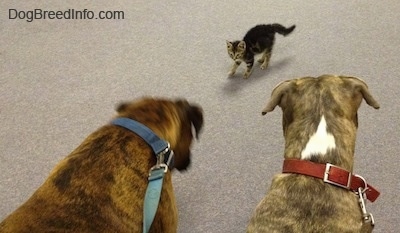 Spencer is looking as if that little thing just might pounce on him any second. Can't be too careful! Bruno, on the other hand, is a pro. He knows how to handle these strange creatures the humans call “cats.” 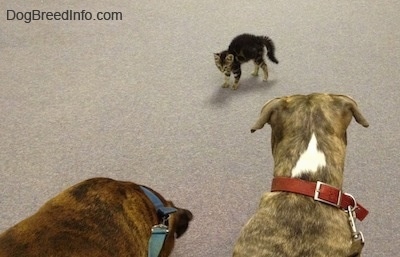 As the cat gets closer Bruno lowers his head even more. 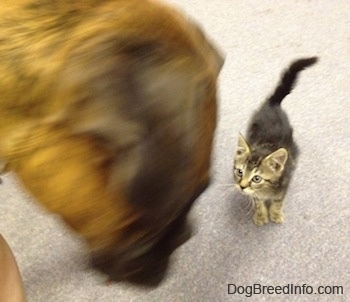 Look Spencer, this is how you handle these dangerous, unpredictable things with claws. You relax and just do whatever they say. If you do, they will leave you alone. Look, like this. 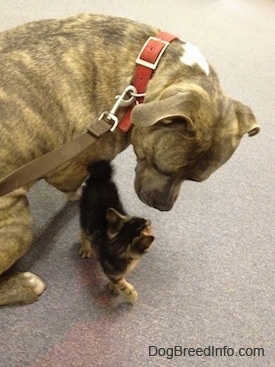 Bruno passes the Banjo test and the ninja-kitty moves onto Spencer. Spencer was not as relaxed as Bruno. He knows at any moment he could get a whack in the face. Sure enough, that is what the kitten did at one point, moved his paw toward Spencer's face. Spencer jumped three feet. YIKES! I've been attacked by the ninja-kitty! Spencer immediately lowered his head, wagged his tail, curled up in a half-circle at Amie and licked her face as if to say, he started it. I do not plan on going after that kitten, but did you see what he did to me?! 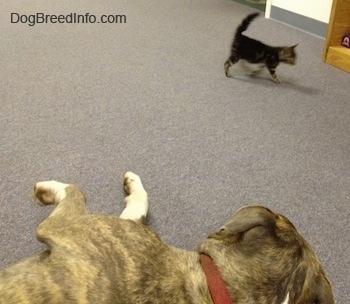 Spencer lay down on the floor but he kept his eye on the ninja-kitty... 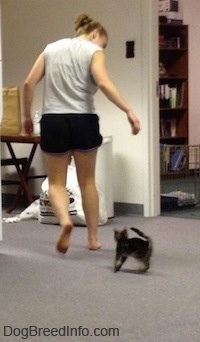 ...and the ninja-kitty ran off and attacked Amie from behind.

It has been about 3 months since Spencer visited with Banjo. Banjo went right up to Spencer and started rubbing all over him. Watch Spencers reaction to this bold kitten.