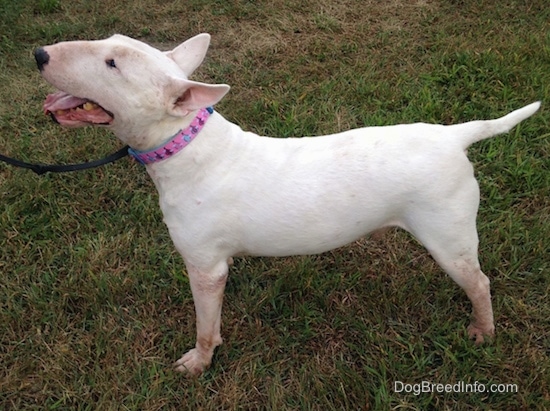 Wally the white standard Bull Terrier at about 9 years old

The Bull Terrier is a strongly built, muscular dog. The body is well rounded with a short, strong back. The head is long and strong, oval-looking in shape, almost flat at the top, sloping evenly down to the nose with no stop. The nose is black. The eyes are almond-shaped, small and deep-set, dark in color. The ears are small, thin and close together. The long neck is very muscular, with robust shoulders. The tail is set low and on the short side, carried horizontally. The coat is dense, short, flat and harsh to the touch. The AKC recognizes two color varieties, the White Bull Terrier and the Colored Bull Terrier. The White Bull Terrier is allowed to have colored markings on the head, but nowhere else on the body. The Colored Bull Terriers may be black, brindle, black-brindle, red, fawn and tricolor with white markings.

Though this breed was once a fierce gladiator, he is much gentler now. A Bull Terrier might have a preventive effect and it might defend its owner in a truly critical situation, but it isn't bred to be a guard dog. Courageous, scrappy, fun-loving, active, clownish and fearless, the Bull Terrier is a loyal, polite, and obedient dog. They become very attached to their owners. The Bull Terrier thrives on firm, consistent leadership and affection and makes a fine family pet. Bull Terriers like to be doing something and fit in well with active families where they receive a great deal of companionship and supervision. They do not do well in situations where they are left alone for 8 hours a day. With the right type of owner this breed is a joy to own, but not recommended for most households. Fond of both grownups and children, but if they do not get enough physical and mental exercise they may be too energetic for small children. Children should be taught how to display leadership toward the dog. Meek owners will find them to become very protective, willful, possessive and/or jealous. Bull Terriers may try to join into family roughhousing or quarrel. They need very firm training and lots of exercise. Bull Terriers must be given a lot of structure, or they may become destructive. Be sure to socialize them well and remain their pack leader 100% of the time, otherwise, they can be extremely aggressive with other dogs. Unaltered males may not get along with other male dogs. They are not recommended with other non-canine pets such as rabbits, hamsters and guinea pigs. They make excellent watch dogs. This breed can be somewhat difficult to train.

Prone to slipped patella (dislocation of the kneecaps), heart defects, kidney failure and skin and flea allergies. Prone to suffer from a zinc deficiency, which can cause death. Gains weight easily. Do not overfeed. White Bull Terriers are prone to deafness.

Bull Terriers will do okay in an apartment if they are sufficiently exercised. They are fairly active indoors and a small yard will do. They prefer warm climates.

This breed needs vigorous daily exercise, which includes a daily, long walk. The Bull Terrier has a tendency to become overweight and lazy if it is not properly exercised.

The Bull Terrier is easy to groom. An occasional combing and brushing will do. This breed is an average shedder, shedding twice a year. You can remove loose hair by a daily rubdown with a special rubber glove.

In the early 1800s Bulldogs crossed with terriers were popular. By 1830 combat between Bulldogs and bulls were at the height of their popularity. Lovers of this so-called "sport" decided to create a dog that would attack even more agilely. They crossed the Bulldog with the Old English Terrier, adding in some Spanish Pointer blood; the result was the Bull Terrier breed. They soon found that the Bull Terriers were not the most successful fighters. In 1860 the white-coated variety, which was nicknamed the "White Cavalier" was bred by English dog dealer James Hinks and soon became a fashionable pet for nobles. The colored variety of Bull Terriers was created by back-crossing them with brindle Staffordshires. The breed has been used as a guard, ratter, herder and watchdog. The Miniature was developed to have the same qualities as the Standard Bull Terrier but with a more manageable size. The Standard Bull Terrier was first recognized by the AKC in 1885 and the Miniature Bull Terrier in 1991. While the AKC sees the Standard Bull Terrier and the Miniature Bull Terrier as separate breeds, the standard requirements are the same except for size. Most other clubs see them as different varieties of the same breed or the same breed without placing a variety label. For example, the FCI (Federation Cynologique Internationale) has both breeds listed under Bull Terrier, separating them by a Standard and Miniature variety. The UKC (United Kennel Club) does not place any height or weight restrictions but does require the dog to be in proportion. The Bull Terrier was recognized by the United Kennel Club in 1948. 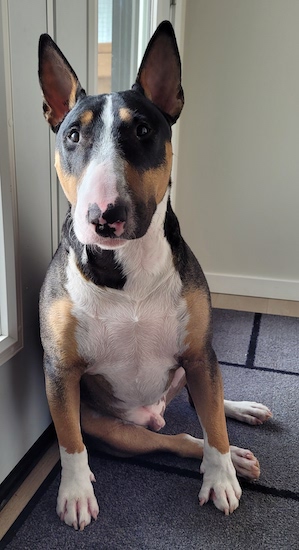 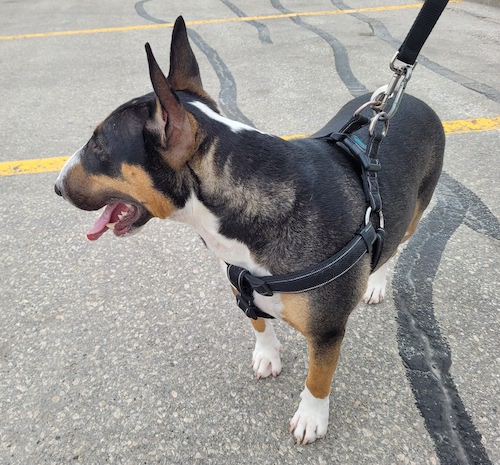 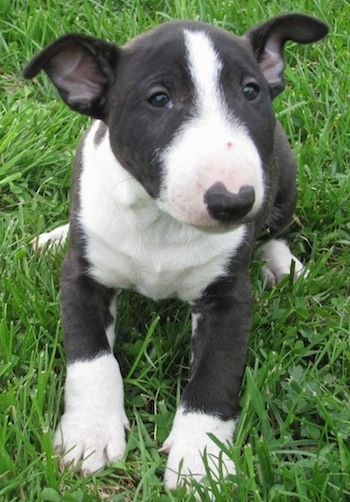 Winston the Miniature English Bull Terrier shown here as a puppy—"Winston is a fabulous, scrappy little comedian, full of love and silliness! He loves children and other dogs and plays daily with our neighbourhood dogs which range from Yorkie Terriers to Great Danes and everything in between. I was very careful with Winston when it came to training and socializing him from day 1, as his breed is often said to be dog aggressive and untrainable. He is stubborn without a doubt and it takes more than a milkbone to get his attention but with Cesar Milan's methods of training, I think he's turned out great! I was very careful when researching breeders and he came all the way from Poland! He travelled 12 hours in total and the second I opened his crate door, he trotted out with the most amazing confidence I've ever seen in a dog, gave me a quick sniff and kiss and he's been a loving and happy little member of our family since! He will go through fazes where he tries to challenge me as his leader but they're always dealt with swiftly and efficiently and he quickly falls back into his proper place in our family pack! I couldn't imagine my life without him now!" 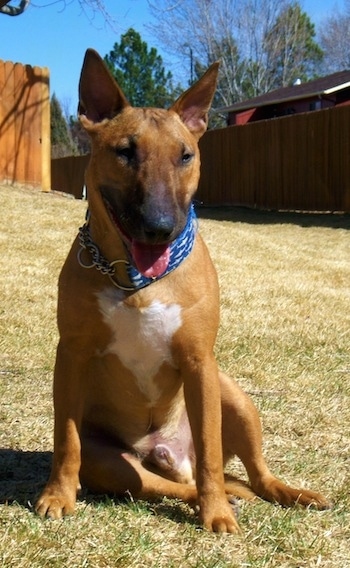 "Spuds is an English Bull Terrier. His coloring is called solid red smut, which is not seen very often. He just turned one year old this week! We were very careful in raising him to be dog-friendly and very accepting of strangers, as those are some negative characteristics of this breed that can become problems if you do not socialize them early. He was born with a moderate heart murmur, and we will always have to keep that monitored. This is a common health problem in the breed, and everyone should be very careful to only purchase puppies from responsible breeders who health-test their adults to avoid this problem." 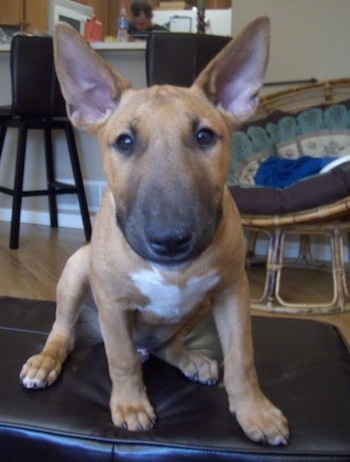 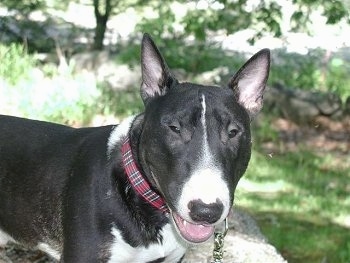 Chip (Hellion's Martin Marauder) is great-nephew of Leo and great-great grandson of Crystal! 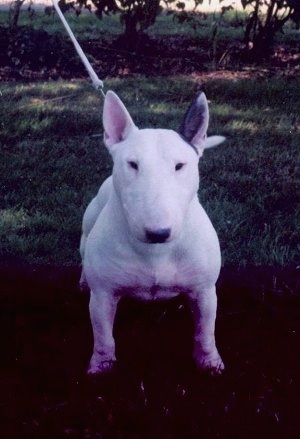 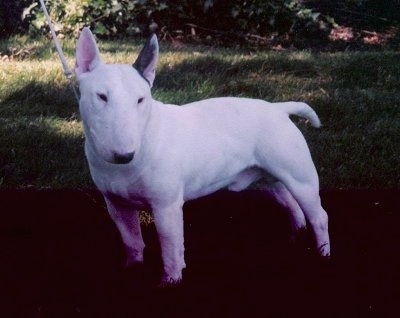