Shadow the Lab mix was constantly trying to pee, only she wasn't actually peeing and she seemed uncomfortable so the owner took her in to the vet as she just didn't look right.

"These are the bladder stones that they removed from my dog's bladder. Considering the dog’s bladder is the size of an orange, it’s little wonder she always felt like peeing, but couldn’t. She is back to normal and her new diet consists of $85 food instead of $45 food. Yahoo!"

"She was always squatting but not much pee came out. This makes sense because her body sensed that the bladder was full, which it was, but with stones. Occasionally she would have blood in her urine. The stones working around in the bladder irritated the lining of the bladder, according to the vet. A ten-day regimen of antibiotics didn’t cure the bloody urine so that ruled out a bladder infection. The ultrasound confirmed the presence of stones. The $1500 operation to remove them was next. Change of diet. She’s back to normal now."

Courtesy of Shadow the dog 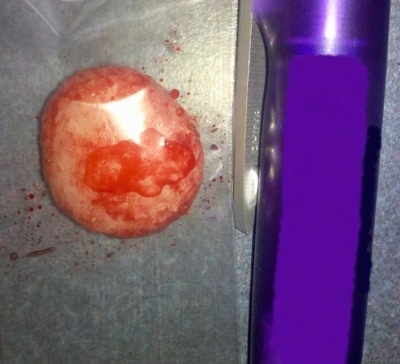 "When Rita was x-rayed near the end of her pregnancy, we discovered a bladder stone. Pictured above next to a pen. It was removed as the puppies were weaned and able to be independent of her. The bladder was quite infected so a piece of the bladder wall was sent to the lab with the stone to identify, if possible, what may have caused the stone (i.e., predisposition requiring special diet or just an infection that triggered the process of stone formation) and to make sure what antibiotic to follow her with and how long to administer it."

"Bladder stones are usually caused by a bacterium. It irritates the bladder and the bladder secretes crystals to encapsulate the bacterium and, essentially, a pearl forms in the bladder. The vet said when she practiced in Alaska; they caught a lot of them when the dogs peed red in the snow. Otherwise, very hard to detect. If not detected, the urine can back-up into the kidney and eventually kill the dog."

"It was the circumference of a quarter and about four quarters thick—smooth too. Cost $1950 for the surgery (in 2010)."

Courtesy of Rita the dog

"I noticed that Lucy, my eight-pound toy dog, was having a hard time peeing. She kept squatting but nothing would come out." 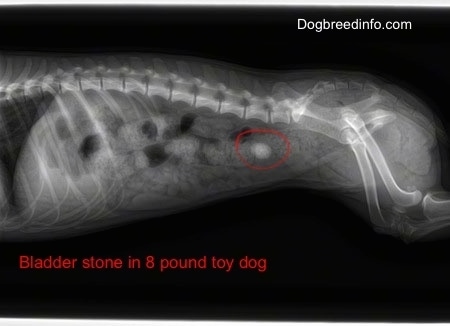 "Then, I saw red blood and thought that she was beginning her heat. The boys were interested, as she was smelling and acting different. Apparently she must have passed a stone, because in one week the boys were not interested in her. Boys can be interested in a girl if they have a bladder infection as well, as the young boys can mistake it for an upcoming heat." 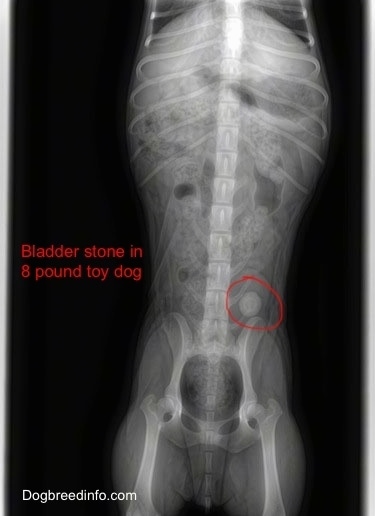 "The vet mentioned that it is hard to know what causes this. Most of the time it is either because not enough water is being consumed or too many minerals in their food. It also could be the fact that they are holding their pee during the day....so hard to really know what caused it." 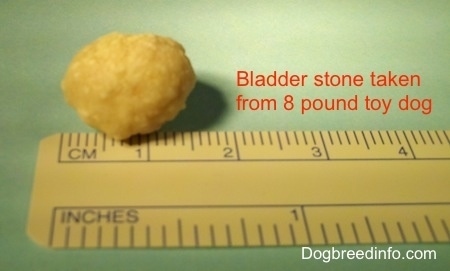 "Changing her food and giving diluted chicken broth would be a good start."

Photos and story compliments of Pam