Limber Tail Syndrome results from an injury to the base of a dog's tail. It is a very painful condition that usually requires rest and a vet visit to get some anti-inflammatory painkillers. The recovery time varies from a day to a couple of weeks depending on the severity of the injury. A dog with LTS will hold its tail totally limp or horizontal for 3 to 4 inches and then the tail will drop straight down. The tail appears to be broken and a dog may need an x-ray to confirm the condition. 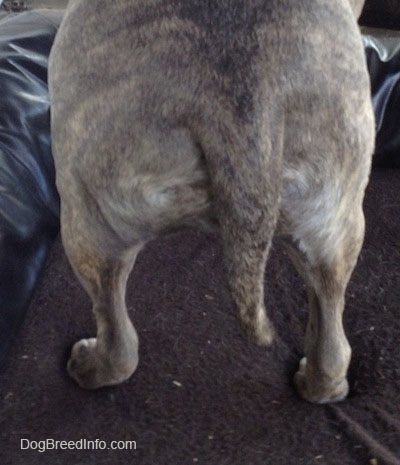 It can be caused by overuse of the tail. Some activities that have been reported to have caused the injury are swimming, especially when in water that was too cold or too warm, hunting and other forms of heavy exercise. It often occurs in working dogs in the beginning of the season when the dog's body is under-conditioned for the task at hand. While it is more common in working dogs, non-working dogs do develop the syndrome. 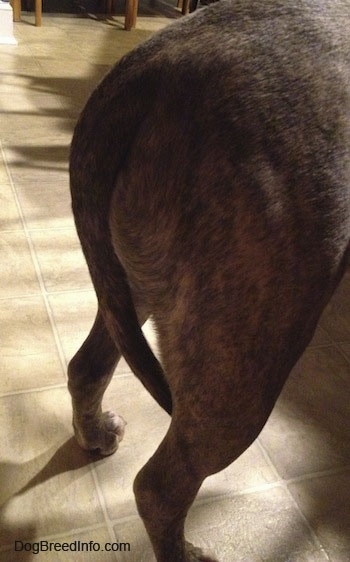 One mix-breed dog was reported to have gotten LTS when his owner had given him a bath with the garden hose after he rolled in some kind of poop. After the bath, the dog had sprinted around the yard like a crazy pup, playing with the family's other dog. Soon after, the dog showed signs of LTS. 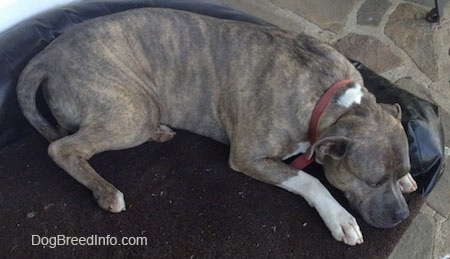 Another case of a non-working dog that developed LTS was Spencer the Pitbull when he was 3 years old. He had gone for a walk earlier in the day. During the walk he was caught in a very heavy rainstorm and had to walk quickly home. It was summertime and was not cold outside, but the rain was coming down in buckets. Everyone was soaking wet. That night, the humans went to a Rolling Stones concert and when we returned, Spencer was so happy he sprinted around the yard. I heard Spencer yelp and ran over to see what was wrong. He seemed fine, but it was 1:00 in the morning and dark outside. We all went inside and Spencer curled up on his dog bed and went to sleep. I did not notice anything until the next day, when Spencer's tail was totally limp. He was in obvious pain. He kept sitting down and staring at this tail. He was not himself and was lying around a lot. Spencer allowed me to examine him. I had checked his anal glands, but nothing drained. When I lifted his tail he yelped, and that is when I noticed the first three inches at the base of his tail was swollen. Oh you poor puppy. What did you do? Spencer kept walking over to me and putting his head on my lap, his tail hanging limp, his eyes looking very sad. He would then look back at this tail. He was trying to tell me something. He was telling me that his tail hurt. When he walked I could tell it was painful for him. 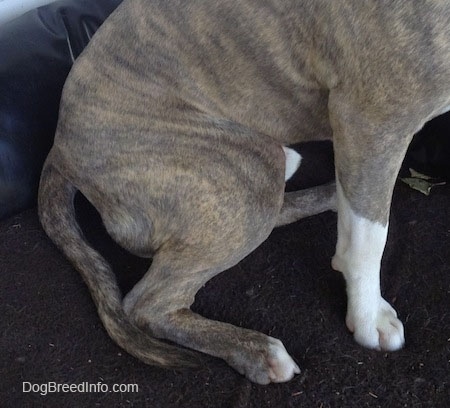 The vet confirmed the condition to be Limber Tail Syndrome and prescribed him Rimadyl two times a day for a week. Rimadyl is a non-steroidal, anti-inflammatory pain medicine.

Spencer slowly got better. As he healed his tail went from being totally limp to sticking out three inches at the base and dropping straight down. The first three inches of his tail were swollen and it looked as if it may have been broken, hence the nicknames broken wag and dead tail. As he healed, his tail slowly went back to normal. This condition is very painful for a dog and Spencer was in a lot of pain, yet not once did he show any signs of aggression toward anyone or anything. When the vet examined him, at one point it was obvious where she touched him was painful. Spencer reacted by sitting down, then rolling like a silly boy onto his back, belly-up, goofily moving his paws as if he was rowing a boat. "Wagging my tail is painful so I will wave my paws since humans are so much fun when they pay attention to me! Maybe if I roll on my back she will rub my belly instead of touching my tail." You silly Pitbull. You have to stand up so we can check your tail.