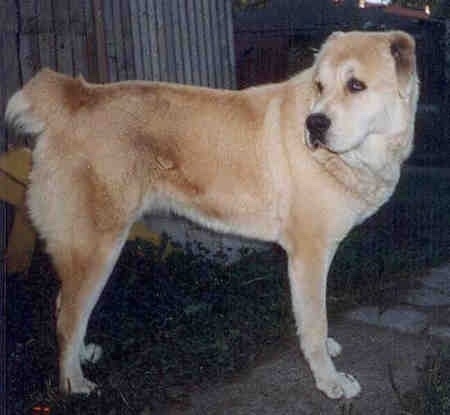 Deja the Central Asian Shepherd—"Deja likes to "guard" the territory from her dog house. We are certain that no cat, rat, mouse, hedgehog or other smaller creature will ever pass her territory :)"

The Central Asian Ovtcharka (CAS) is a very large, muscular, Mastiff-type dog. Docking of the tail and ears is optional, depending on the country in which you live. Some countries like France, Netherlands, Australia, etc., and many more ban cropping and docking. There is no real stop from forehead to muzzle. The body is a bit longer than tall. The dense coat comes in two varieties, long and short. The coat comes in a wide variety of colors. The CAS should be rugged in type with big bones, a large chest and wide back. The well-boned forelimbs have powerful shoulder muscles. The skin on the face is thick and may form wrinkles. The thighs are powerful. The back is strong and moderately long.

The Central Asian Ovtcharka is a calm, fearless flock guardian. Independent, they stand their ground and do not back down. They are good with all members of their own family, however, they should be supervised with children. Outside the home they may try to dominate other dogs and are wary of strangers; they are guardians and will act as such. They like to bark at night and this may present a problem if you have close neighbors. Socialization is a must for the Central Asians, unless they are being used as flock guards. They get along with cats and other non-canine animals and other dogs, as long as the dog is not a threat to their charge. The CAS lived its life with the Family of Turkmen thus they are family dogs that want and seek interaction with daily life. This flock guardian is not for everyone. They need an owner who understands the flock guard type and the temperament that comes along with it. This is not a breed for the timid or meek owner. The objective in training this dog is to achieve pack leader status. It is a natural instinct for a dog to have an order in its pack. When we humans live with dogs, we become their pack. The entire pack cooperates under a single leader; lines are clearly defined and rules are set. Because a dog communicates his displeasure with growling and eventually biting, all other humans MUST be higher up in the order than the dog. The humans must be the ones making the decisions, not the dogs. That is the only way your relationship with your dog can be a complete success.

Some males are even larger. There is NO maximum height or weight for this breed.

The CAS has hip and elbow problems that require screening for all genetic related disorders commonly found in large breeds. Also bloat is a problem with many Mastiff breeds, though so far this hasn't been seen in the CAS.

The Central Asian Ovtcharka requires a large yard, the larger the better, with a fence. They have a job to do (guarding). Small living conditions can lead to boredom and thus digging and chewing will be a problem. Even with lots of exercise these dogs like to be outdoors watching over their territory. They must have a securely fenced yard or they will expand their territory as far as they can.

The CAS would be great for the person who hikes or jogs. On days they are not taken for a hike or a jog, they need a daily, long walk. They may appear to be lazy when they are lying down watching their property, but they can be up and running in a split second.

The Central Asian Ovtcharka can live from 12-14 years in its native countries, however, they live closer to 10 years due to poor vet care and the lifestyle they lead.

The CAS does not require a lot of grooming. Weeds and brush tend to not stick in the heavy, double coat, and mud, once dried, brushes right out. These dogs shed their coats heavily in the spring. The coat should be brushed extra at this time to remove the dead hairs. The rest of the year they are light shedders with easy coat care.

The CAS is a 4000-year-old breed. Not much is known on the true origin, but many believe the Tibetan Mastiff is a forefather due to the nomadic lifestyle of the people who have CASs. They are found in areas of Russia, Iran and Afghanistan to Siberia. Five more countries that share this area are Kazakstan, Kirghizastan, Uzbekistan, Tajikistan, and Turkmenistan. This independent and aloof breed has protected nomadic herdsmen and their flocks for centuries. Similar dogs may have accompanied the Mongols when they invaded Eastern and Central Europe, and were probably the source of Europe's herd-protecting sheepdogs. This breed is seldom seen outside the Central Asian Republic; in Russia it is in decline, losing favor to the larger Caucasian Sheepdog. The CAS is beginning to be bred in the USA. 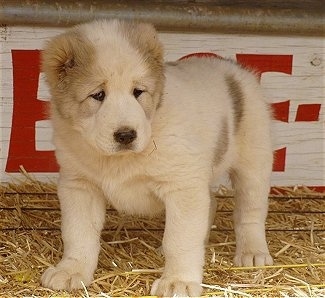 Mountain Top Zero as a young pup standing in the hay 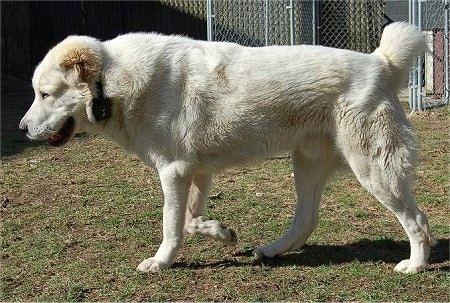 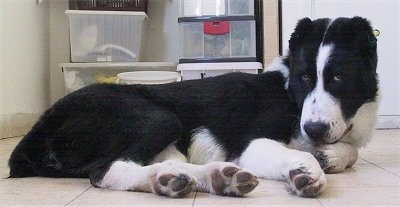 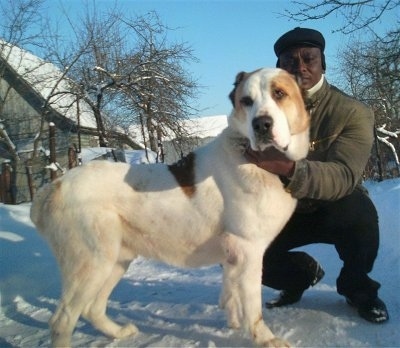 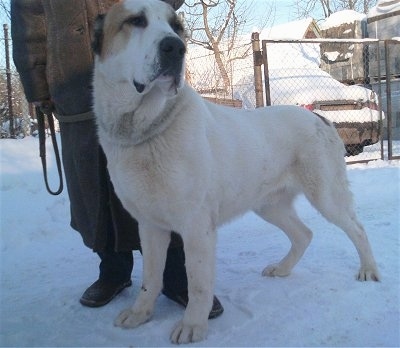 Dagar the Central Asian Ovtcharka at 15 months old, weighing about 173 lbs. (79 kg)—"He is the son of Uzbash, world champion 2004, champion of Europe 2003, 2005, vice champion Europe 2004, and champion of many other countries." Photo courtesy of Petlove Kennels 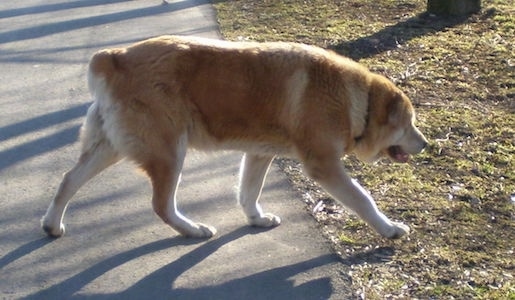 Deja the Central Asian Shepherd going for a walk 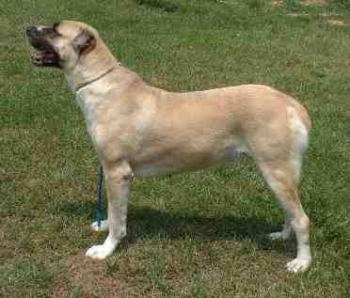 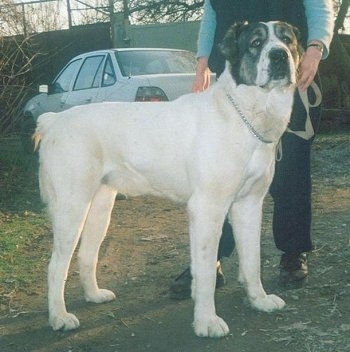 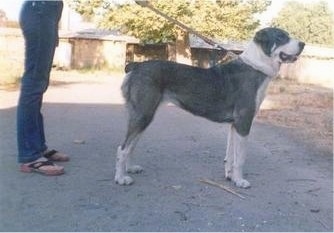 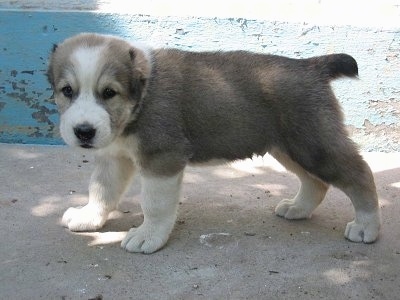