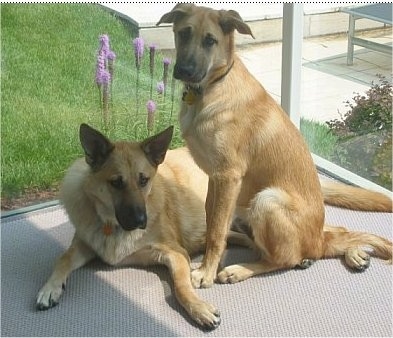 "Kodiac Bear has been such a great dog… so in March of this year we got another Chinook pup (Rivertrail Oz). The two are inseparable and great companions. Their personalities are polar opposites: Kodi is cautious around strangers, calm and gentle, super easy to train. Oz is rowdy, wants to lick the face of every person and animal he sees, vocal (a bit whiny, even when he’s laing at your feet he’ll sort of whine a bit…) and is overall much more willful than Kodi was as a pup (but very bright, so not difficult to train… just needs consistency). Hurricane Kodiac Bear (age 22 months) and Rivertrail Oz (age 6 months). You can see the ruff around Kodi’s neck in this picture (and on Oz in the picture below)…perfect to protect them for harness pulling."

The Chinook has a compact muscular frame that well suits this gentle sled dog. The body is well balanced; the chest is deep; moderate bone and flexible musculature are prominent. The skin on the head is tight with no wrinkles. The stop is moderate and there is a furrow running vertically from the stop to the occiput. The muzzle is powerful and the teeth are enduring. The breed's ear carriage, rather wind-blown and bending, gives the dogs a curious and entreating glint; however, the ears can also be pricked up. The nose has large wide nostrils, should be solid black, and project slightly over the mouth. The lips are black in color. The top lip overhangs the lower lip very slightly and the corners of the lower lip are slightly pendulous. The teeth meet in a scissors bite. The eyes are almond-shaped and of moderate size, with an intelligent expression. Dark brown eyes are preferred, but lighter, amber eyes are acceptable. Eye rims are dark-pigmented. The feet are oval, firm and compact, with well-knit, well-arched toes and tough, deeply cushioned, darkly-pigmented pads. The toes are moderately webbed and the feet are well-furred, even between the toes. The front feet turn slightly outward. Dewclaws can be removed from the front feet and, if present, are usually removed from the back feet. The tail is thick at the root and tapers to the tip. When the dog is standing, the tail hangs downward, approximately to the hocks. When the dog is moving, the tail is carried up. The Chinook tail is never docked. Chinooks have a double coat of medium length hair. The undercoat is thick, soft, and downy in texture. The outer coat is coarse and the hair lies close to the body. Less dense coats are normal in very warm climates. The neck is well-furnished with hair, which forms a protective ruff blending into the apron. The tail is well-furred, with longer hair at the base and underside of the tail. The groin and inside of the rear legs are protected by the coat. In color, the Chinook is tawny (a golden fawn).

These are dedicated, hard-working and versatile sled dogs. Performing their given task is their primary concern in life. In addition to sled-pulling, the breed also can be used for carting, obedience, flyball, search and rescue, and packing. The build of the dog, coupled with its agile movement and drive, make it a great agility dog. One of the key breed characteristics is the Chinook's temperament: calm, non-aggressive, with a willing, friendly disposition. Chinooks are bred to work in teams and should not exhibit dog-aggression. Notwithstanding its gentle, even temperament, the Chinook is a dignified dog. Socialize well to prevent them from being reserved with strangers or unfamiliar surroundings. In action, the Chinook is graceful but purposeful, alert but calm. His expression reflects his intelligence; his proud carriage reflects his dignity. Most Chinooks make excellent pets for children, especially when the dog is raised with them (even with rough and tumble children). Most Chinooks tolerate children even when they haven't had any contact with them. These dogs are incredibly loyal. They work totally reliably off-leash and really only want to be with you. Given acres and acres of land, the dogs are generally going to be wherever you are; so having a lot of space is not a requirement, but you do need to take them for daily walks where they are made to heel beside or behind you, never in front, as the pack leader goes first. The Chinook needs to be close to its family and part of the family. They do not make good outdoor pets. The Chinook is generally good with non-canine pets. They need an owner who is confident and firm with them, but not harsh. If you are passive with them they will become strong willed. They need to be shown who is the "top dog". Chinooks are easily trained through positive reinforcement, but do not respond to heavy-handed training tactics. A calm authority in a way dogs can understand is best. They are very smart, and only need to know what you want them to do.

The following health conditions have occurred within the overall Chinook breed: excessive shyness, eye abnormalities, hip dysplasia, hormonal skin problems, mono/bilateral cryptorchidism, seizures and spondylosis. Generally, the breed is very healthy and these diseases occur in a small percentage of the population. Breeders are working hard to screen out dogs with any diseases listed above, and buyers should make sure the parents of a puppy are certified as free of eye and hip disease.

Chinooks make fine apartment dogs so long as the owner makes a commitment to regular exercise and walking. They do not bark often and can be left reliably after puppyhood for periods of time. Unlike their northern breed counterparts, these dogs do not make good outside pets. They are emotionally too sensitive, and isolation from human contact triggers separation anxiety and other emotional turmoil. These dogs should not be kept in a backyard and should always be considered a part of the family.

Chinooks require moderate exercise and are not hyper dogs, but should be taken for a daily walk. Once exercise is over, the dog will easily entertain itself or will rest.

The coat of the Chinook practically takes care of itself and requires little to no grooming. Chinooks have a double coat consisting of a downy undercoat and a course overcoat. Some Chinook owners have reported their dogs shed twice a year for about a week; otherwise, they shed very little. Others have reported their dogs to shed heavily all year round. One owner said, "Kodi sheds VERY heavily almost year round (despite our regular brushing of his coat). Oz is also a shedder—although so far not as much so as Kodi. I think whoever has a Chinook should be prepared for dog hair in the house."

The Chinook is a Northern breed derived from a single ancestor. The father of the breed, Chinook, was born on author/explorer Arthur Walden's Wonalancet, New Hampshire farm in 1917. He was one of three pups born to a "Northern Husky" female, sired by one of the dogs on Peary’s North Pole team. Chinook’s sire was a large, mixed-breed dog. Chinook was a "sport," a phenomenon of nature, not resembling either of his parents. He was an outstanding sled dog and accompanied Admiral Byrd's South Pole expedition in 1927. Chinook’s offspring, who inherited his coloring, size and general characteristics, were bred to combine the strength of the large freight dog with the speed of the smaller racing sled dogs. In the early 1900s, the Chinook set records for distance covered, loads carried and running time. This breed has been bred through the years by a small number of dedicated fanciers. The Chinook is a very rare breed. The Guinness Book of World Records listed the Chinook as the world's rarest dog in 1966 when only 125 existed. The Chinook used to be an outstanding sled dog, but in the 1980s the breed was almost extinct, with only 12 breedable dogs left in the world. Their sled drive is greatly reduced. They are much more companion dogs who are capable of doing any sort of work, but they really love sledding, skijoring and carting. They are particularly good at carting because, unlike their Siberian and Alaskan counterparts, they are easily trained in obedience and can work very calmly in harness. Fanciers are working to gain more recognition and are actively seeking sledders to work with the breeders in programs that emphasize the working qualities. The Chinook was recognized by the United Kennel Club in March 1991. The United Kennel Club worked with the COA (Chinook Owners Association) to develop a crossbreeding program, which uses dogs originally bred into the breed to create more diversity and health in the gene pool. There is an application process, stringent guidelines, and a committee to oversee the whole program. At the end of the program, the dogs will be eligible for purebred registration in the UKC. In an unprecedented move, the UKC also allows intact Chinook Crosses to be LP registered. (Only spayed/neutered non-pure dogs can be LP registered in the UKC.) The Chinooks New England Club is one of the affiliate clubs of the COA. They are also working hard at preserving the breed. 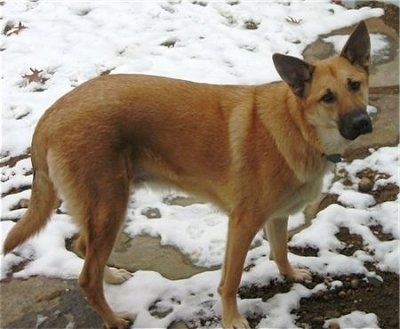 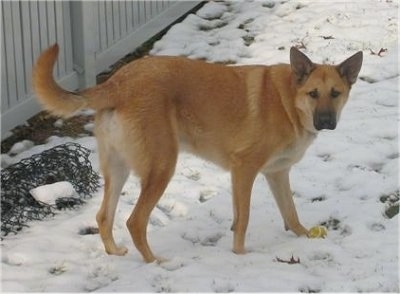 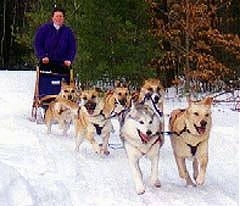 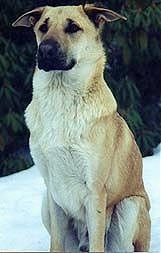 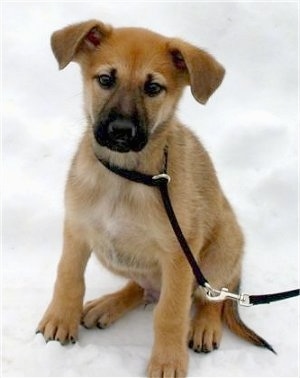 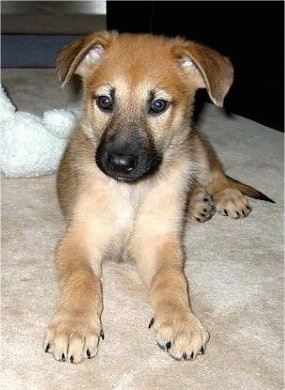 Hurricane Kodiac Bear the Chinook as a young puppy "This is Trip, a two-year-old Chinook. He is a very lively, go-getter kind of dog. He is trained to skijor and you can’t even touch the ski bag without him jumping for joy! We trained him based on Cesar Millan’s techniques (exercise, discipline, affection) and Trip has turned out to be quite the well-balanced, wonderful dog. His favorite activities consist of playing fetch, skijoring, going for bike rides and trips to the dog park. Cesar's methods, when practised correctly, are very effective, I have definitely seen it from experience." 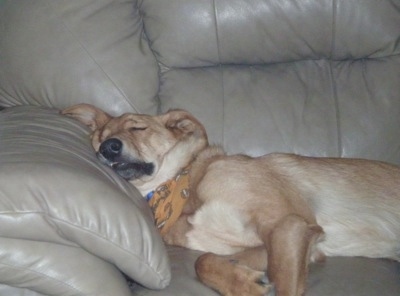 Trip the Chinook taking a nap on the couch "This is Tory the Chinook. That's short for 'Victorious Rejoicing.' She got her name because she became very ill as a puppy and almost died. But Tory is now happy and healthy, her owner is "proud to call her mine!"" Tory the Chinook walking across the grass.

See more examples of the Chinook