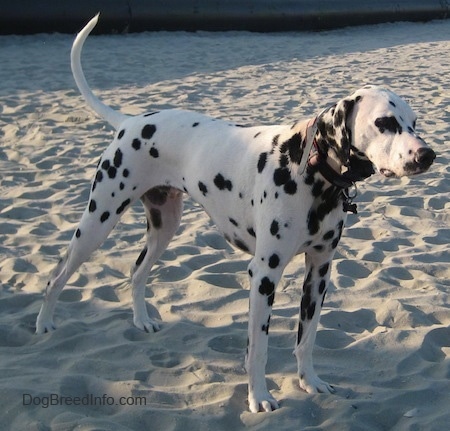 Bode the Dalmatian at 4 years old

The Dalmatian is a large, strong, muscular dog. The skull is about as wide as it is long, and flat on the top. The muzzle is about the same length as the top of the skull. The stop is moderate but well defined. The nose can be black, brown (liver), blue or a dark gray that looks like black. The teeth meet in a scissors bite. The medium-sized round eyes are brown, blue or a combination of both. The ears are set high, hanging down, gradually tapering to a rounded tip. The chest is deep. The base of the tail is level with the topline and tapers to the tip. The feet are round with arched toes. Toenails are white and/or black in black-spotted dogs and brown and/or white in liver-spotted dogs. The short coat has fine dense hairs. The symmetrical coat is predominantly white with clearly defined round spots. The spots can be black or brown (liver) which are the preferred colors in the show ring, but can also be, lemon, dark blue, tricolored, brindled, solid white or sable. Not all of these colors are accepted into the show ring, but they do occur in the breed. The more defined and well distributed the markings are, the more valued the dog is to the show ring. Puppies are born completely white and the spots develop later.

Dalmatians were bred to run under or alongside horse-drawn carriages and therefore have a vast amount of stamina and energy. They do not like to sit around all day with nothing to do. They are playful, happy, easy going and very dedicated. The Dalmatian needs a lot of leadership along with human companionship in order to be happy. They will not do well left out in the yard all day and have been known to dig crater-size holes when done so. The Dalmatian enjoys playing with children, but if they do not receive enough mental and physical exercise they may become high-strung, and too excitable for a small child. This buildup of energy causes their minds to become unstable and they can become timid without enough socialization. They get along well with other pets, but without proper human to dog alpha communication where the human clearly tells the dog that he is not in charge and fighting is an unwanted behavior, they may become aggressive with strange dogs. Quite intelligent, but can be willful if they sense their owners are in the slightest bit meek or passive, and/or if the owner is not properly communicating with the dog. Generally does well with firm, consistent training. The Dalmatian is trainable to a high degree of obedience. They can be trained for defense and are good watchdogs. Half of the people who adopt a Dalmatian puppy do not keep them past the first year. Young Dalmatians are very energetic, and need a tremendous amount of leadership and exercise. If you give them what they instinctually need, daily walks where the dog is made to heel beside or behind the human, never in front of the person holding the lead, and very stern, but not harsh leadership, they will make a wonderful pet and will calm down after a few years. People who keep them long enough to get past their active stage tend to be very pleased. If you are thinking about adopting a Dalmatian puppy be sure you have the time, are authority driven and have the energy for them. If you cannot provide this for them they will become very high strung, hard to manage and destructive. If you are a very active person who has the time, and knows what it means to be a pack leader then a Dalmatian may be right for you.

Deafness in this breed is relatively high; about 10-12% are born deaf. Dalmatian puppies should be BAER-tested for deafness at about 6 weeks old, and totally deaf puppies should be spayed or neutered. While the breeding of deaf puppies should be avoided, it is very possible to raise a well-adjusted deaf dog. Prone to urinary stones, as uric acid levels in Dalmatians are in general higher than in any other breed, sometimes causing urinary blockage. Also prone to skin allergies, such as synthetic fibers in carpets and upholstery.

A Dalmatian is not an ideal dog for apartment dwellers unless it can be taken out for a brisk walk or run several times a day. They are very active indoors and will do best with at least an average-sized yard. Not suited to living outside in cold climates.

This is a very energetic dog with enormous stamina. They need to be taken on daily, long, brisk walks or jogs where the dog is made to heel beside or behind the human holding the lead. Never in front, as instinct tells a dog that the leader leads the way, and that leader needs to be the human. In addition, it needs plenty of opportunity to run, preferably off the leash in a safe area. If these dogs are allowed to get bored, and are not walked or jogged daily, they can become destructive and start to display a wide array of behavioral problems. They love to run!

Often large, not uncommon to have up to 15 pups in one litter.

The Dalmatian sheds all year round but does so profusely twice a year. Brush frequently to help manage the constant shedding. They do not have a doggy odor and are said to be clean and even avoid puddles. Bathe only when necessary.

There is total disagreement about the origin of this breed. Spotted dogs are known throughout history in Africa, Europe and Asia. The breed may be related to the Pointer. Traces of spotted dogs are found in Egyptian bas-reliefs and Hellenic friezes, so it certainly is an ancient breed. In 1700 a dog known as the Bengal pointer, similar to the Dalmatian, existed in England, calling into question the Dalmatian’s Yugoslavian origin. Some claim the Dalmatian is a Croatian breed. Efforts to have it recognized as a Croatian breed had been rejected, up until 1993, when the FCI did finally recognize the Croatian roots of the Dalmatian dog, although they continue to deny Croatia standard patronage rights over the breed. In the Middle Ages it was used as a hound. The breed became popular as a carriage dog in the 1800s. They trotted beside and among the horses and carriages, very reliably following their masters, guarding the carriages and horses while the master was occupied elsewhere. Very hardy with great stamina, it was able to easily keep up whether its master was on foot, on horseback, or in the carriage. The versatile Dalmatian has seen many uses, such as a mascot for firemen, war sentinel, draft dog, circus performer, vermin hunter, fire-apparatus follower, bird dog, trail hound, retriever, shepherd and as a guard dog. 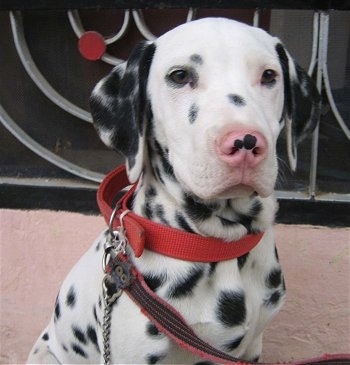 Don the Dalmatian puppy from India at about 3 months old—"Don loves to run in my canals and also likes to play with a ball. He also likes long jumps and biscuits. He dislikes medicine and strange people." 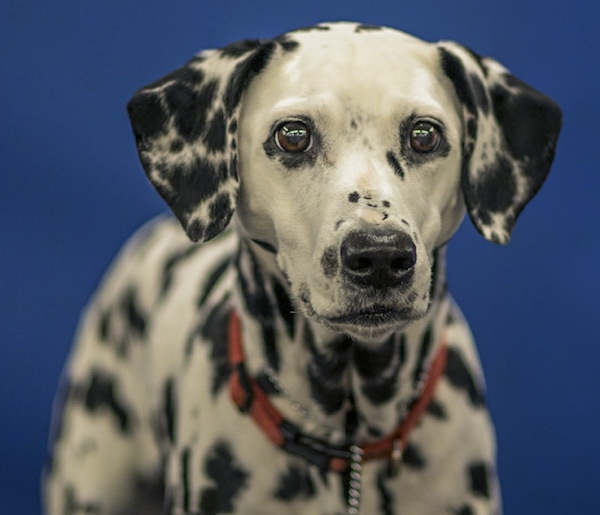 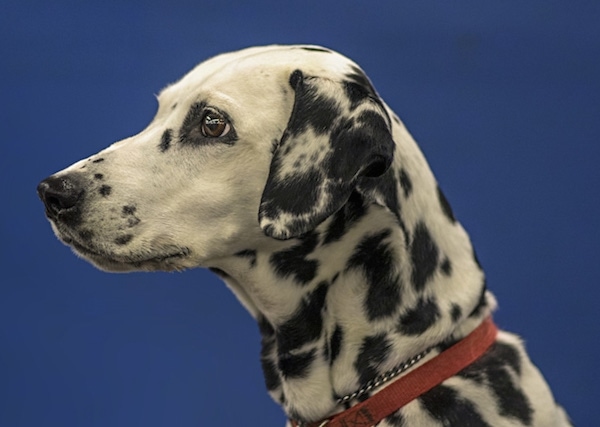 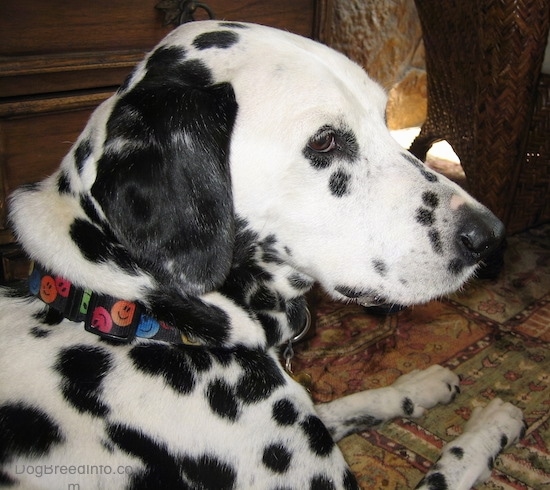 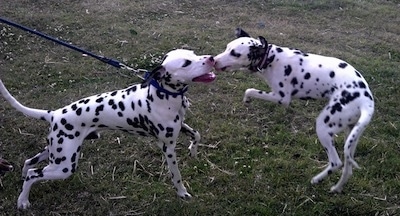 Leo the Dalmatian at 6 months old playing with his Dalmatian friend—his owners say, "He is a really hyperactive dog." 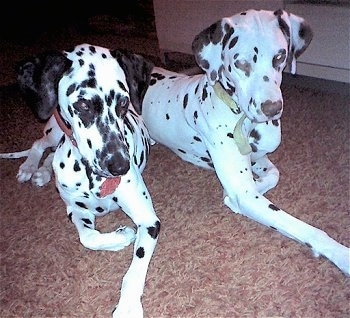 Snickers and Kandee, two Dalmatians all grown up—"Kandee, is the brown spotted (right), and on the left is Snickers, black spotted. They were both looking at a piece of chicken; I was wondering who will be the good dog who sits and acts nicely so he'd take the piece of chicken, and it was funny the way they both just sat down next to each other, giving the same reaction, which made me a little bit confused who would win. That actually forced me to make them a whole bowl full of chicken; I had to be fair lol."

See more examples of the Dalmatian