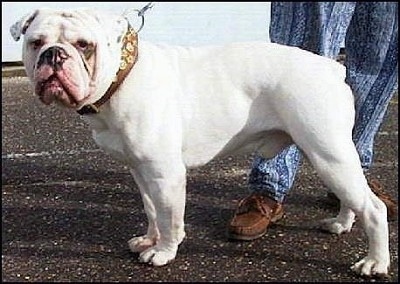 The Dorset Olde Tyme Bulldogge is a medium-size dog that stands proud and out from the rest fearless, confident, alert, yet docile, showing great strength, it is a real powerhouse that attracts stares and comments. His strong, hard athletic physique is still close-coupled and compact enough to promote the traditional bulldog looks that are common with regards to his breeding, making him stocky, athletic and imposing. The shoulders are muscular and slightly sloping, fore legs are straight, well boned and set well apart, elbows turned neither in or out, feet broad strong, toes tight, nails curved and strong, pads thick and tough. The hindquarters are broad and muscular, with well-developed second thigh denoting power, but not cumbersome, moderate angulations at hocks; cow hocks and splay feet are serious faults. His gait is powerful, heavy, with good drive from the hindquarters. A straight or pump handle tail is preferred and most desired, but crank and corkscrew are accepted. The Dorset Olde Tyme Bulldogge has a large, strong head; the upper region of the head is slightly convex from one side to the other, the forehead dominates the face, however it is still wider than high, the head is furrowed, with loose thick and wrinkled skin about the throat and side of head, cheeks: prominent, due to the strong development of the muscles, broad muzzle: with obvious folds, broad and deep, keeping its length in comparison with that of the entire head. The nose is broad, with well open nostrils; lack of fore face with nostrils set on top of muzzle is a reversion back to the kennel club bulldog and is very undesirable. Care is taken to keep the traditional strong bulldogge head, allowing short strong enough muzzle to not hinder breathing while still keeping the solid close-coupled broad set bulldog looks. The body is compact. The chest is wide and deep with ribs well sprung and well set down between the fore legs. The back is short, giving the impression of a well-balanced dog. The neck is slightly arched, of moderate length, very muscular and almost equal to the circumference to the skull. The topline is solid with a broad and muscular back, withers well marked, broad loin, rather short and solid. The ears are set high and wide, rose preferred, button is accepted. The coat is of fine texture, smooth flat, short coat desired, similar to the glossy sheen of the Stafford, double or oily coat un-desired. Any color acceptable, Dorsets are bred in variations of brindle, variations of pied, also black and slate gray-blue; the slate gray blue's known as Dorset Blue poole's, as a respect and tribute to the original blue Paul (pol) of Scotland, and the area of Poole in Dorset. This breeding is still at the early stages of Steve's breeding program, and have only just after a few years started to reproduce type in color.

The Dorset Olde Tyme Bulldogge is a very good all-around family member, loyal among the children and keen to please and be part of the family circle, not homed as a guardian, but determined protector nonetheless. Keen to lie at your feet or walk at your side, a good companion very attached to his master and very affectionate; longs for leadership and to be loved. They are usually good with non-k-9 pets, especially when raised with them from puppyhood and they usually get along well with other dogs; socialize well. Be sure you are this dog’s calm, but firm, confident and consistent pack leader, providing daily mental and physical exercise to avoid unwanted behavior issues.

Preferring a strong, stocky muscled physique—height and weight should be in keeping with a symmetrical, well-proportioned body, keeping the appearance of strong traditional bulldogge looks.

The Dorset Olde Tyme Bulldogge can live indoors or out. If they are kept outdoors they will need the benefit of a good, dry draft-free kennel. They will do fine in an apartment.

This Bulldogge can handle any amount of exercise. They are keen to lie at your feet or walk at your side, but like all dogs, need to be taken on a daily walk to fulfill their primal canine instinct to walk.

Some dogs have been known to live up to 14 years

Coat care can consist of a daily wipe over with a cloth or soft brush; care should be taken to make sure all wrinkles around the muzzle are free from any dirt or staining.

With a breeding program known to go back to the late 1980s, Steve Barnett set out to re-create his ideal bulldogge of old, utilizing his earlier experiences of the various bulldog crosses he was involved in breeding, some of which went into the foundation stock of the late Victorian Bulldog breeder Mr. K Mollett, who originally set out to produce a fitter kennel club bulldog. Steve Barnett's goal (in his own words) has been "always to produce a national bulldogge, a dog which is brought out into the show or ring with pride, to stand beside your dog knowing that he is an athlete, capable of non-stop energy, worthy of the name gladiator, a true bulldog both in appearance and traditional bulldog temperament. Not a nuisance around animals and other dogs, but with an inbred fire if needed, or called upon, a dog that would grace the arena of any show in any country any were in the world, and be gazed upon with true spirit and real national pride, not shown amongst the fruit and veg in a wheel barrow like the kc dogs of today." Steve found his desired Bulldogges, way back in history being bred strong in the early 16th century, bred for the kings and queens of the Tudor period as the bear baiting dogs of old, the same dogs were bred for the early barbaric sports, of both bear baiting and bull baiting. During the Tudor period both these bloody sports were at a height of national pastimes, the normal person, although poverty stricken and hungry, seemed to always find the odd half penny to attend the various bear pits that lined the south side of the Thames as early as 1506, mentioned by Shakespeare and other known writers in their day. Henry the VIII (1509-47) had a real strong liking and interest in the early bear pits and bull baiting, appointing the first official master of the game, documented in history Queen Elizabeth had a fascination for the sport of bull and bear baiting. She once visited Kenilworth Castle in 1575, then owned by the Earl of Leicester, here 13 bears were assembled for her amusement, although this was the height of the bull and bear baiting period in old England. A bill to end bull-baiting was defeated as late in history as 1829 by forty-five votes, only to be abolished 6 years further on in 1835. A royal sport that has been documented throughout history for close to 400 years, these early dogs were the backbone to the now out-of-shape bulldog of today, the kind that won the hearts and minds of the early writers of the day, that stamped the seal, that brought national pride to the words English bulldogge, our goal has been to re-produce this early broad-muzzled, flat-faced dog of old, but to still keep the traditional shape and character we have all come to love. In doing this Steve Barnett presents us with the Dorset Olde Tyme Bulldogge, the original English Bulldogge, our national breed, the better, fitter, Bulldogge. (Written with pride by Steve Barnett) Examples of Bulldogs from the Long Ago 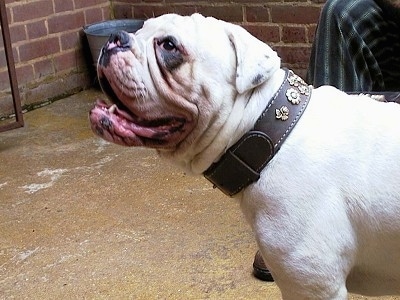 Mastini's Lord Horatio Nelson is 19 inches to the shoulder and 75 pounds in weight. He will easily walk 6 miles a day, as he does every day. Photo courtesy of Steve Barnett 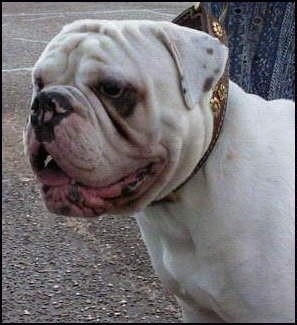 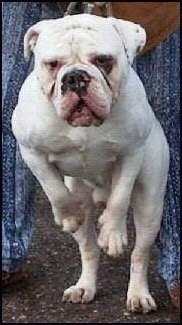 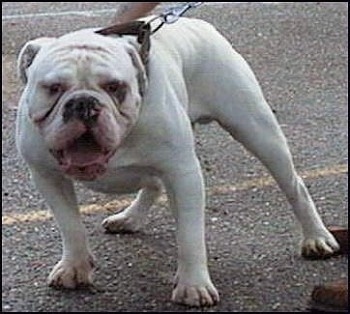