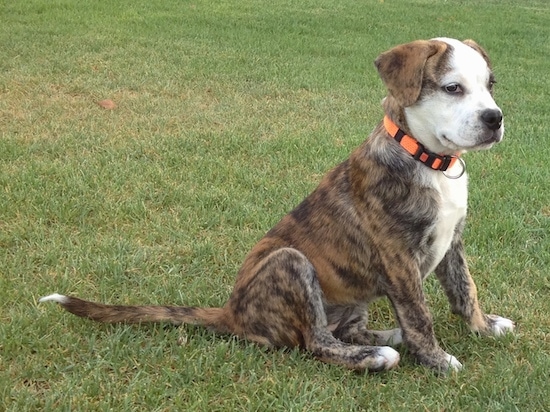 Patchy the English Bulldog / Staffordshire Bull Terrier mix as a puppy at 3 months old—"I got her when she was 2 1/2 months old. She is adorable! Very loving, very very clever with beautiful colours!!!! She plays with other dogs. I never felt that I'd have a puppy. In terms of her character, difficulties at the beginning, not listening to anyone, chewing things, poop everywhere etc.. Although I would describe her as an active to hyper active dog, she is controllable and not reaching annoying levels. I totally communicate with her in all aspects at that small age! She's a very quick learner! She learnt from the age of 3 months, to sit, lay down, crawl, stay and wait until I tell her to eat."

The English Bully Staffy Bull Terrier is not a purebred dog. It is a cross between the English Bulldog and the Staffordshire Bull Terrier. The best way to determine the temperament of a mixed breed is to look up all breeds in the cross and know you can get any combination of any of the characteristics found in any of the breeds in the hybrid. Not all of these designer hybrid dogs being bred are 50% purebred to 50% purebred. It is very common for breeders to breed multi-generation crosses. 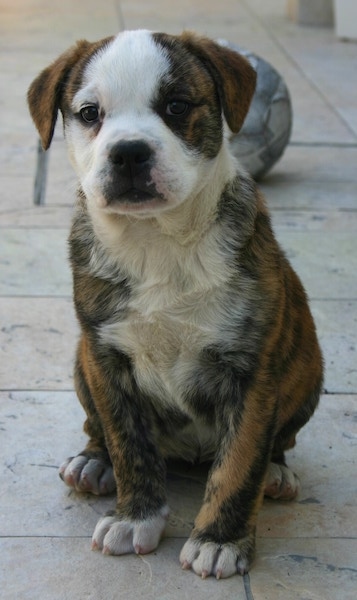 Patchy the English Bulldog / Staffordshire Bull Terrier mix as a puppy at 3 months old—"Yesterday, I took her to the beach. I can't describe to you how much she enjoyed it! At the start she was a bit afraid to get in, but I leashed her and guided her in and that was it!!! She's a great swimmer as well!!! Although Staffordshire Bull Terriers are not great swimmers, neither are English Bulldogs, but Patchy can swim like a "dolphin"! :) She's very playful with other dogs, and a teaser! :) She loves exercising in that way! Running up and down with other dogs! I also socialised her with a cat. She is her best friend. The cat hangs outside of our house and plays with Patchy. She loves walks and sitting with us in the house. Patchy has her own dog house outside but most of the time she's with us." 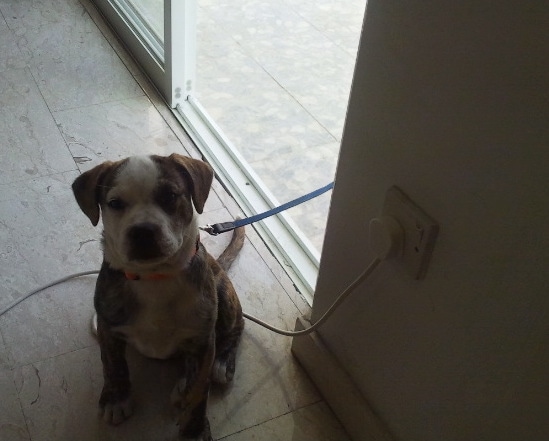 Patchy the English Bulldog / Staffordshire Bull Terrier mix as a puppy at 3 months old—"She also has some characteristics of a guard/watch dog. If one enters the house that she doesn't know she'll bark and growl at them. In general she doesn't bark at all!! Only in such cases. I am so lucky to have this dog!!! Honestly! This is the second dog I owned. The first one was when I was 13 years oldand was a Labrador (now I am 30). My other dog died from cancer at the age of 13. She was amazing as well! Total communication!! Now I have Patchy, who was the only dog that survived in litter of 7 dogs. I guess she took all the charisma of her brothers and sisters. Patchy is very unique! I thank God that she was brought into my life and I am very lucky to have her in the family!" 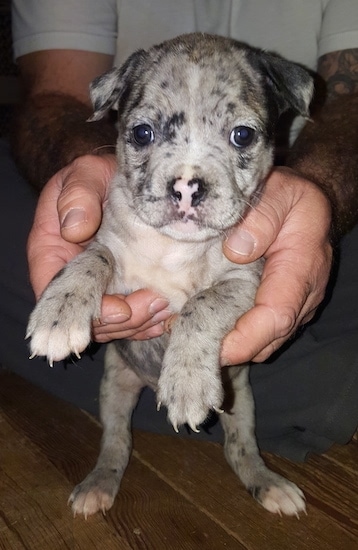 Claire the English Bulldog / Staffordshire Bull Terrier mix as a puppy at 7 weeks old—"She knows her name already, very loving and playful. She loves running around the house, but also chilling in your arms and is a cuddler." 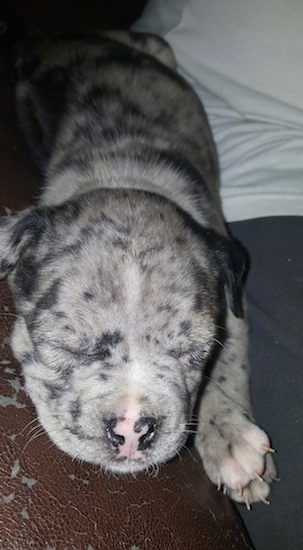 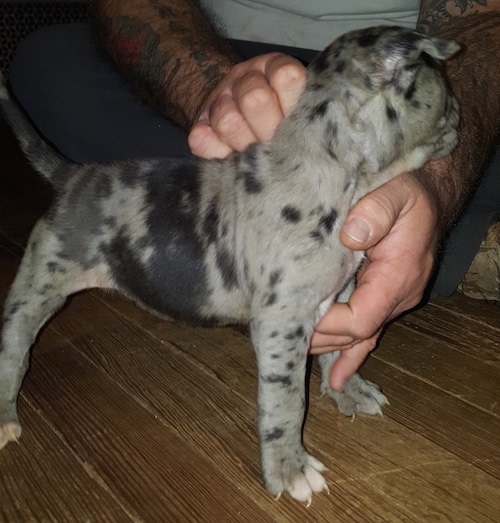