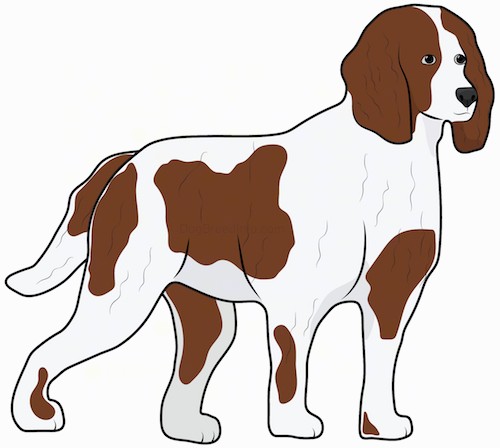 The English Water Spaniel had curly hair that was shorter on its face and paws. The dog shared traits between Poodle, Collie, and the Spaniel and came in various colors although the most popular had marks of brown and white. Other varieties were solid blacks, browns, whites, and a combination of black and white. They had longer legs, and a longer straight muzzle. Over time they lost the traits of the Poodles and Collie as they started to resemble the Spaniel breeds more and more.

As you can tell by the name, the English Water Spaniel loved to swim and wade in the water. They were known to be able to enter the water slowly and not disturb any of its surroundings. They loved and were trained to hunt quarry and other birds. They were known to be extremely affectionate and loyal to their owners and were easily trained because they were an intelligent breed. They were very popular and were able to perform physical activity for hours a day without a break.

Because this dog is extinct, there are no known health issues of the English Water Spaniel although the American Spaniel, its close relative, was occasionally prone to skin diseases.

The English Water Spaniel would have done fine in a small space such as an apartment or a petite house. They were moderately active and would be content with daily walks and or an average sized yard to explore and run around.

This breed most likely would have needed long walks daily in order to become a balanced and calm dog. They also like to roam around outdoors and chase birds and small animals.

Because this dog is extinct, there are no records of how long they lived. Because they are similar the the American Water Spaniel, they probably lived around 12–15 years.

Because this dog is extinct, there are no records of the size of their litters. Because they are similar the the American Water Spaniel, they probably had around 4–6 puppies per litter.

Their longer fur required brushing about twice a week in order to avoid knots in their fur and they required a bath when necessary. This breed was probably a light shedder as they are closest related to the modern American Water Spaniel.

The history of the spaniel group is mostly unknown because they are one of the oldest dog breed groups and they have been bred for hundreds of years before records were kept. Main characteristics of Spaniels include curly or wavy fur and a strong sense of smell. They are medium or small in size and were used at a gundog for hunting. They are related to setters, another dog group which are their direct ancestors. Like many other extinct dogs, there are many theories on how the English Water Spaniel came to be.

Because the name spaniel translates to “Spaniard” and “Spanish”, many assume that they originated from Spain. This theory is false because spaniels were popular long before Spain was ever a kingdom. Spaniels were around in France and England in 1066, when the land that is now called Spain was divided into multiple countries. The more believable translation of the word Spaniel is that is translates to “Hispania” which was a Roman Province that was in the same spot where Spain is today.

Another theory that can be debunked is that the Spaniels originated from East Asia. This was a popular theory because there are a few dogs that resembled the English Water Spaniel such as the Tibetan Spaniel and the Japanese Chin. This theory is false as recent DNA tests have concluded that the dogs in East Asia and the Spaniels from Europe are not closely related.

Spaniels were originally used as hunting and working dogs and were commonly thought to be from Ancient Celts and that the Welsh Springer Spaniel was the original Spaniel.

Records show that during the Roman period, Britain's main exports were medium to small hunting dogs. There is no record of what kind of dogs these were, but many experts say they were Spaniels, while others claim that they were Beagles or Terriers. In any case, Spaniels were around where ever there was Celtic influences, especially in the British Isles and in France. Since Spain was inhabited by many citizens who were related to the Celts, called Celtiberians, it could be possible that they are in fact from the area that is now Spain.

The most believable theory has to do with the saluki breed which were known as the dog of the nobility in the Middle East. The Saluki was similar to the Spaniels in appearance because of the longer fur on their ears and tail. The theory is that Crusaders may have brought this dog all over the continent, someone may have been visiting Spain at the time and mistaken the Saluki for being Native to Spain, naming them the Spaniel.

Before the invention of guns, Spaniels were used to locate birds and chase them out of the brush. The hunters would then release trained falcons or throw nets over the birds to kill the birds. Spaniels also loved the water and would hunt while in the lakes.

Spaniels were eventually bred into various different breeds including a Toy Spaniel that was popular in the Renaissance period, Spaniels who prefered land, and Spaniels who prefered water. English Water Spaniels were among the first water dogs in England and were used to hunt water birds such as ducks, swans, geese, and many other birds as well. Within the 16th to the 19th century, the English Water Spaniel was very common throughout England and were simply known as the Water Dog.

Over the years, the appearance of the English Water Spaniel changed overtime. The most common traits were a curly coat and fur that was white and liver brown colored.

Because the English Water Spaniel was the only known water dog in England up until the 1800’s, it stayed popular for a long period of time. During the 1800’s however, the St. John’s Water Dogs started to be imported from Newfoundland into England. Because this new breed was skilled in many areas such as hunting, retrieving, and water sports, the English Water Spaniel slowly became less popular and began to resemble every other spaniel breed.

The Kennel Club, founded in 1873, recognized fourteen English Water Spaniels as they were rare by this point in time. There were attempts to save the breed although they eventually disappeared sometime after 1903 and other spaniels took its place. 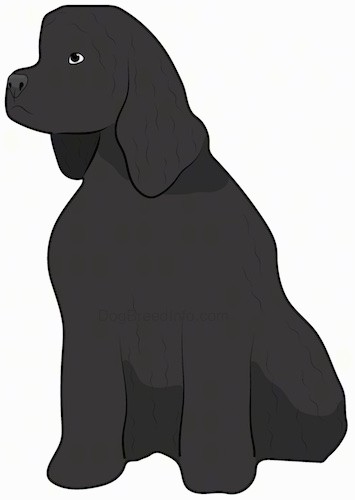