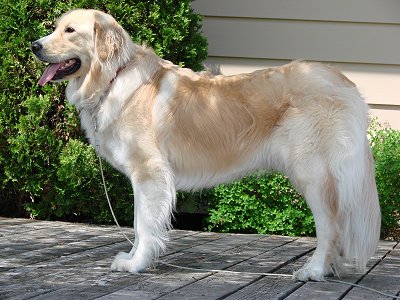 Fluffy the Golden Pyrenees (Golden Retriever / Great Pyrenees mix)—"She is 16 months old and weighs 85 pounds in this picture. She is, obviously, pretty big—and is a lap dog. Her temperament is absolutely even. She adores children and watches them intently to make sure everything is on the up and up. A crying baby has her at attention and nosing around to see what she can do to help! She is so people-oriented that she will leave a treat behind if there is a chance that someone near her will shower love upon her."

"Fluffy is very compliant, too. The vet techs said that she should be the poster-dog for "fun" spayings, as Fluffy was so happy before and after the procedure. She likes to go to the vet because there are people there who are all about her! You can wobble her dewlaps, trim her toenails, give her a bath—all without complaint. The look in her eyes tells you she is indulging you, but loves you, so it's all good.

"She does some classic Pyr things—like "playing deaf." If she has thoughts on what she'd like to do, and your thoughts are different, well...you might as well be talking to the wall. *Unless* you make it sound fun—like a people-thing. She also barks at night if the windows are open. We live in a suburban area and she will make you aware of every noise she hears. She'd also dig for China—given the opportunity. We're talking craters, not holes." 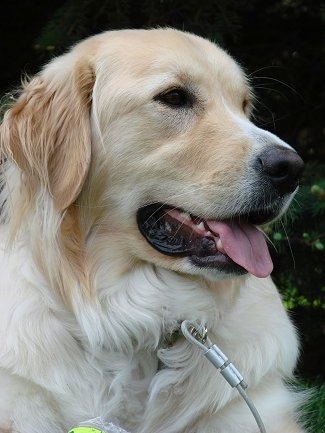 Fluffy the Golden Pyrenees (Golden Retriever / Great Pyrenees hybrid)—"For exercise, we walk about a mile a day and she is perfectly content. She's more of a couch potato than an Energizer Bunny. She's always ready to go—but would really like it best if "going" included intermittent naps." 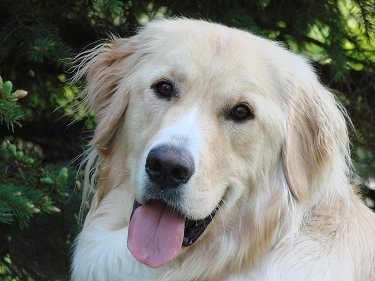 Fluffy the Golden Pyrenees (Golden Retriever / Great Pyrenees hybrid)—"Her coat is long and plentiful. I brushed her every day during the spring and fall, but now it seems she's fine with a thorough once-a-week brushing. Her tail and "britches" are the most snarl-prone. The rest of her coat just needs clearing of the downy-soft undercoat. Point of interest: She does have double dewclaws. Basically, the phrase that best describes her is "joie de vivre" because everything, everything is her "favorite ever!"” 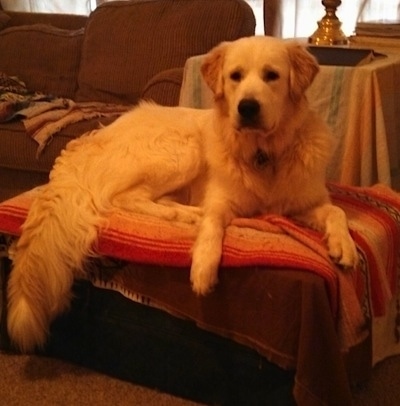 Jelly the Golden Pyrenees at 18 months old—"This is my boy, Jelly. His given name is Admiral, but I've always called him Jelly, short for jellybean. I named him that when he was born, because I gave his sisters all J-names and it sort of stuck. He's so like his father, Jack and his mother, Jillie (you see the theme here). Jack is the Golden Retriever and Jillie is the Great Pyrenees. Jack actually seems delighted to have a like-minded companion ("oh, look, a female!"). Jelly was about a year and a half old in this in this picture. He's now almost two, early adulthood for a slow-to-mature mix. Both father and son are intact (not "neutered"). They horse-play, tumble about on they're backs on the floor, side by side, and sleep together, usually one's head resting on the others hip, and for some weird reason, Jelly won't eat unless he's next to Jack. It doesn't seem like a competition thing. They'll both be relaxed and quiet. It's more like a security thing. The "boys" are living proof that intact males, even in the presence of a bitch in heat, can coexist peacefully if the humans keep the pack balanced."