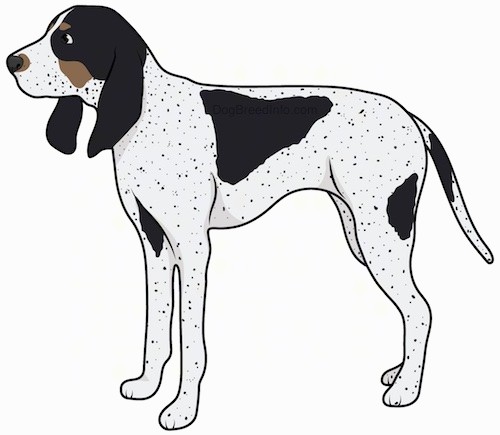 A drawing of a Grand Bleu de Gascogne dog.

The Grand Bleu de Gascogne has a longer snout and a large head with a couple wrinkles on the dogs cheeks. They have a slight slope on their forehead area that is barely pronounced. Their long lips go well past their muzzle and their ears hang low, past their long lips. They tend to have a scissor bite which is great for their hunting quality. The fur on their chest often creates a dewlap because of the looseness of their skin. They have muscular legs that are also long, creating an elegant look. Their coats are short, dense, and easy to manage and have black and white patterns but are never fully white. They often have a dappled coat which gives off a blue appearance.

The Grand Bleu de Gascogne is a friendly dog that does well in packs and tends to get along with most other dogs. They are very affectionate toward people and enjoy playing with children. Since they are hunting dogs, beware around small animals like cats or rodents.

Since this dog is a larger breed, be aware of possible hip or elbow dysplasia. Prone to common ear infections.

These dogs are high energy dogs and must be walked daily along with having space to run and play. They need both mental and physical stimulation in order to become balanced calm and happy.

Since these dogs have short and smooth coats, they only need to be groomed or bathed when necessary. Be sure to keep their ears clean to prevent infections.

The Grand Bleu de Gascogne descended from France and are an older breed that developed from the Gaul hounds and the Phoenician hounds. They were first recorded in 14th century France and have their genes spread throughout many breeds across the world. The Grand Bleu de Gascogne was used by nobles and royalty in order to hunt boar, deer, wolves and other large animals. They are pack dogs which means they hunt in groups rather than alone. When hunting, they were known to use their barking and howling to communicate to their other pack members in order to take down the large prey.

In the 18th century, the Grand Bleu de Gascogne made its way to America when a French noble, General Lafayette, gave a few of these dogs to Washington. This event happened in 1785 when the United States was fighting for their independence. Now, they are said to be more popular in the United States than they were when they originated in France.

Although they are no longer used in France, the Grand Bleu de Gascogne was still bred with other hunting and scenthound dogs in order to keep their genes alive.