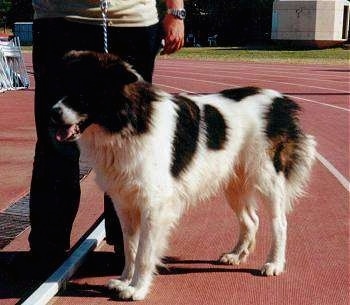 A Greek Sheepdog At a dog show at the Olympic Stadium in Athens, 2000.

The Greek Sheepdog is a medium to large size dog, with a solid body and great physical strength that is capable of escorting the flock and also fight with the enemy while maintaining its physical superiority. Its head is massive with its muzzle-skull. The skull is normally curved, with obvious hyper eyebrow arches and it is nearly as wide as it is long. The muzzle and cheeks are wide and deep. It has a scissors or plane bite and is covered by fat and slightly loose lips. The skin is thick and is covered by dense fur. Cropping the ears is not permitted, and dogs with cropped ears cannot be shown. The brown eyes are of average size, egg-shaped, placed symmetrical in parallel lines of the oblong axon of the skull, with enough distance between each other. From the oblique side of the head their position is a little under the muzzle level, as if there is an imaginary line extended toward the skull. More dark tints are preferred. The eyelids must be tight without revealing their mucus membrane. This dog has a serious penetrating, calm look about him. The chest must be wide and deep up to the height of the elbows. The thorax consists of arched ribs with medium curvature; they are extended backwards enough to leave enough space for the heart and the lungs. The tail is thick at the base. Some have long tails while others have short or no tails. The double coat is dense and abundant. Coat colors include black, grayish-brown and white. The breed has never been bred for color, but rather for a heavy skeleton, good muscle, and a dense, semi-long to long coat.

This flock guardian dog is NOT a breed for the average pet owner. Proud and hard-working, it is a natural sheep and goat guard, but never gathers or directs them. Working in pairs, the dogs prefer to move at the sides of the flock, guarding against wolves and other predators. The Greek Sheepdog is an independent, brave, decisive, loyal, working dog, with a high sense of duty and strong protective instinct toward animals and its environment. Naturally wary, loyal only to the flock leader-shepherd, the Greek Sheepdog can be characterized as the Big Mountain shepherd’s dog of Greece. The Greek Sheepdog is a flock guardian dog used to guard livestock. This breed had to be strong, to be able to persecute during the fight with the enemy as well as to be able to adapt to rough conditions. It does not tolerate violent behavior. It is extremely dominant and requires an owner with very strong leadership; one who understands its flock guardian ways. When placed in a pack situation, this breed will seek to be top dog by intense fights. Suspicious but tactful in the presence of strangers, he doesn’t make friends easily. He may appear calm, but he is ready to protect at all costs at any time. When protecting his flock he moves along the border, selecting places from where he will be able to see a wide area. He’s aggressive toward the wild animals and able to drive them back with his deep bark. If his deep bark does not drive them away he will pursue the intruder and attack. Early socialization is vital if the dog is to be a trustworthy companion. He can be trained and has a tendency to judge a situation before taking any action. This breed is best trained by an experienced handler who understands how to earn the dog’s respect. The objective in training this dog is to achieve pack leader status. It is a natural instinct for a dog to have an order in its pack. When we humans live with dogs, we become their pack. The entire pack cooperates under a single leader. Lines are clearly defined and rules are set. Because a dog communicates his displeasure with growling and eventually biting, all other humans MUST be higher up in the order than the dog. The humans must be the ones making the decisions, not the dogs. That is the only way your relationship with your dog can be a complete success. This breed should not be pushed to aggressiveness. The Greek Sheepdog walks with a short trot. While walking, the dog keeps the head low. This breed tends to mature slowly. Females have many puppies and are good mothers.

This breed needs acreage. It's a robust dog with good physique and a powerful muscular body. This breed is capable of moving all day under difficult weather conditions, in inaccessible areas and with minimum demands for food and facing the wild beasts that threaten the flocks by running after them and fighting them.

Very energetic and must have various activities to keep him busy. Boredom will lead to destructive tendencies and excessive barking. When they are not actively working as a flock guard they need to be taken on a daily walk, where they are made to heel beside or behind the person holding the lead, never in front, as instinct tells a dog the leader leads the way, and that leader needs to be the human.

Regular brushing of the long double coat will keep it in good condition, but extra care is needed when the dog is shedding its dense undercoat. The outer coat does not mat unless there is a burr, foxtail or some other outside object that gets stuck to the coat. This can be an issue for outside working dogs. Bathe or dry shampoo only when necessary. Trim nails when needed. This breed is a seasonal heavy shedder.

The area known as the foothills, located in Greece, is heavily populated with sheep. Centuries ago, migrators from Turkey likely brought their sheepdogs with them as they traversed the land, and similarities between the Greek Sheepdog and the Turkish Akbash Dog lead one to believe that such a derivation is probable. Years of breeding with local and semi-local stock produced the breed. 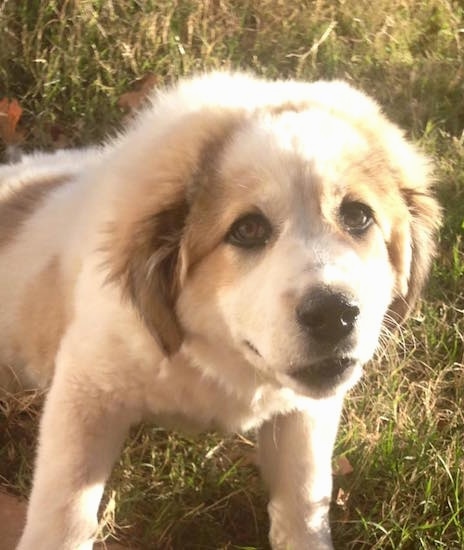 Megara the Greek Sheepdog puppy at 3 months old—"Our new farm dog, Meg, was a fortunate find at a nearby military base in Texas. A pilot from Greece was here for training and had brought his dogs with him. We are excited to have her and watch her grow. We would love to hear from other American owners!" 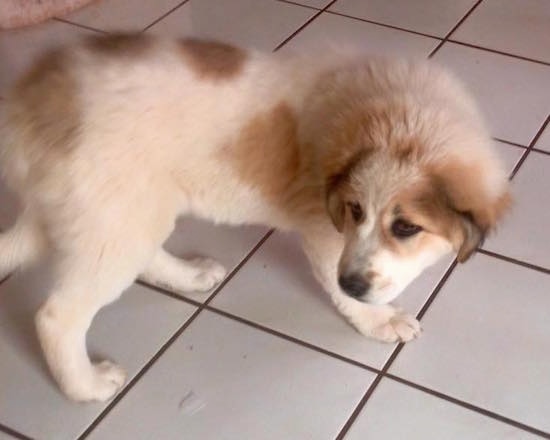 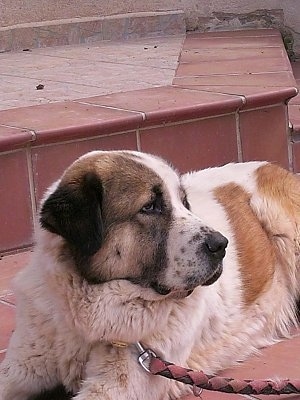 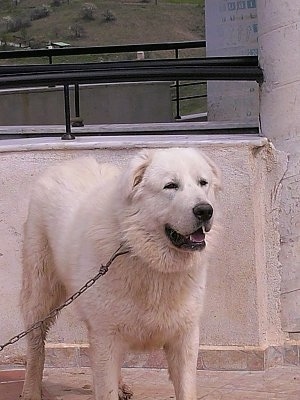 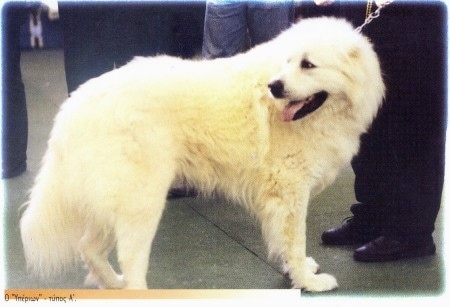 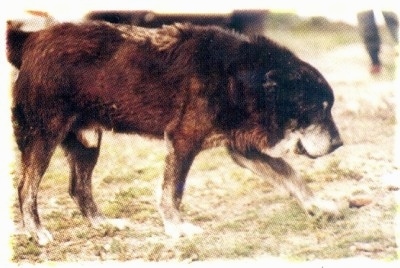 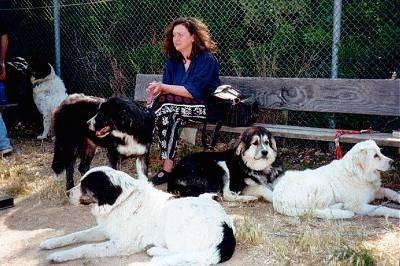 The Greek Sheepdog is a breed under recovery. As you can tell by looking at this photo, there are a couple of the different types/breeds. The white-black dog sitting in the front is the mother Kali at 2 ½ years old; other dogs from right to left are a female named Chiona (Snowwhite) and two males named Megas (Big) and Spithas (Spark).. 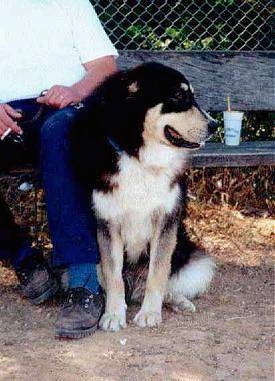 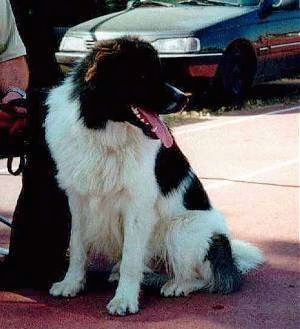 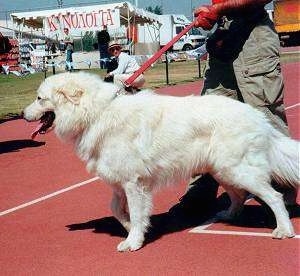