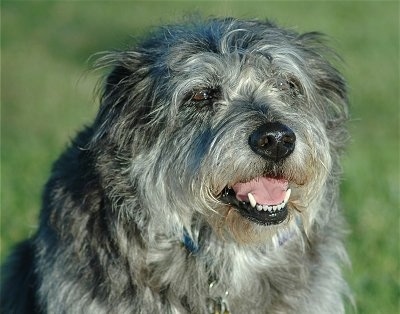 This breed has a rough textured, long coat that tends to be shaggy. They have defined, hairy eyebrows along with a long beard and mustache. This breed has brown eyes, a black nose, and can be a variety of colors. Some are grey, black, or a blue grey while others are a combination of black and fawn or a combination of different greys. Their coat is very dense and straight on top of their thick skin which gives them an appearance of always looking rustic or unkempt.

The Griffon Nivernais is a stubborn dog that needs to be trained by a leader or they may take control in their own way. They love humans and are very friendly toward strangers although be careful around small animals. If they do not grown up with other animals such as cats, their hunting instincts may come forward. Despite the fact that these dogs can be independent, they still love affection and cuddles.

Like most other athletic breeds, watch out for signs of hip dysplasia or retinal atrophy. It is important to take your dog to the vet for regular checkups.

The Griffon Nivernais is suited for life in a house with a large outdoor space to run and play. Because they tend to bark and bay a lot, they should not live in an apartment. These dogs do best in rural areas.

This breed needs to be walked daily and need a large space to run and play. They can be very independent so they need a leader as an owner. They need to be taught tricks and obedience in order to calm their highly intelligent minds. These dogs also love to hunt so be careful when they’re off leash or near small animals.

Because these dogs have a medium length coat, they may need to be brushed occasionally. Other than that, bathe only when necessary.

The Griffon Nivernais has been around since the 1200’s. They were originally used in France as guard dogs in order to keep the wild boar and wolves off the property. Originally bred in the highlands of central France, this dog is one of France’s oldest hound breeds. Unlike most other breeds, this hound was popular among all social classes, from the peasants to the nobility and in between. King Louis the IX was known to love the Griffon Nivernais as it was his favorite dog breed. After the French Revolution, the Griffon Nivernais became popular throughout France, not just in the highlands.

There are a couple theories on how the Griffon Nivernais came to be. One theory suggests that this breed is descended from Balkan Dogs because they were brought back from the Crusaders anywhere around 1100–1200’s. Because the Griffon Nivernais shares a lot of traits with the Bulgarian Barak, another theory is that these two dogs are directly related. Others think that the Griffon Nivernais is related to the Gallic Hound which was brought to France by the Romans.

After the reign of King Louis IX, the popularity of the Griffon Nivernais slowly died down over the centuries. In 1990, efforts to make the Griffon Nivernais more popular went into effect. These dogs are most known in France although they have recently been imported to both the United States and Canada. They are still in the process of beginning to be recognized by certain groups, countries, and new regions.