(This is the purebred, not the mixed breed Siberian Retriever hybrid.) 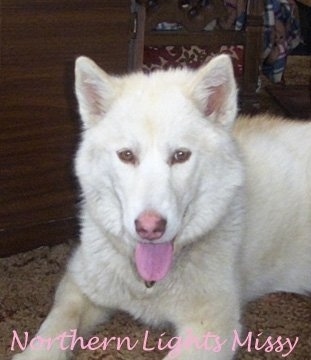 "This is Missy. She is a six-month-old Labrador Husky. She is a purebred, right from Labrador. She is approx. 50 lbs. and will grow to approx. 80 lbs. She eats mainly raw meat, and is great with kids."

The Labrador Husky greatly resembles the wolf. It is slightly smaller than the Canadian Eskimo Dog and the Alaskan Malamute, but larger than the Samoyed and Siberian Husky.

The Labrador Husky is an unknown and often misunderstood breed. It is not a mix between a Labrador and a Husky, but a purebred dog native of coastal Labrador. It is similar in a lot of ways to the wolf. It does not bark, but can howl like a wolf. The objective in training this dog is to achieve pack leader status. It is a natural instinct for a dog to have an order in its pack. When we humans live with dogs, we become their pack. The entire pack cooperates under a single leader. Lines are clearly defined and rules are set. Because a dog communicates his displeasure with growling and eventually biting, all other humans MUST be higher up in the order than the dog. The humans must be the ones making the decisions, not the dogs. That is the only way your relationship with your dog can be a complete success.

The Labrador Husky are not usually recommended for apartments, however they can live in apartments if well trained and properly exercised.

This breed needs to be taken on a daily long walk or jog. While out on the walk the dog must be made to heel beside or behind the person holding the lead, as in a dog's mind the leader leads the way, and that leader needs to be the human.

The coat sheds heavily twice a year. During that time they need to be brushed and combed daily.

The Labrador Husky is native to coastal Labrador. It belongs to the northern group of dogs, which include the Siberian Husky, Samoyed, Alaskan Malamute and Canadian Eskimo Dog. The breed was most likely brought to Labrador by the Thule Inuit around 1300 AD and introduced to the Dorsets. The dogs were used as sled dogs to carry heavy loads. Inuits first lived in Alaska (900 - 1000 AD). Over the centuries, the Labrador's ancestor had become cut off geographically from the other northern breeds. To maintain the desired qualities of strength, vigor, stamina and intelligence inherent in their dogs, the descendants of the Thule Inuit had allowed the Labrador to breed with the native wolf populations. This practice continued until the invention of the snowmobile, when dogs were no longer needed to pull heavy loads.