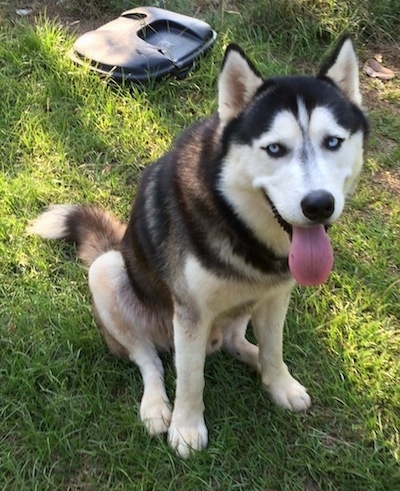 Ace the Siberian Husky at 2 years old—"Ace is a wonderful pet that has brought so much joy to our family! He was bought for our daughter, Brittany 2 years ago, Brittany was 15 at the time, she did her best to be more of a dominant "mom". She couldn't be strong minded enough to do this so her dad and I took over knowing he needed discipline. So he thinks of her as a sibling and Brittany's dad is the "alpha" male, and I'm like 2nd in command. Lol. He is like an over grown kid! We live about as far south in Alabama as you can get and we had to drive all the way up about 400 miles north of the top of Alabama to get him from a reputable breeder. We keep a kiddie pool filled with water all year around because we have mild winters. We have papers on him and we have him microchipped and we do everything we can do to make sure he stays happy and healthy. We have not bred him yet and was debating on getting him neutered because he does disappear for a couple of days at a time here and there to bother females in the neighborhood. A fence won't keep him in as he has jumped over a 6-7 foot tall from a sitting position and we used a wire fencing system but being a hard headed dog he just finds a weaker spot lowers his head and runs thru! Otherwise he hangs around and we live in the country so there's plenty of running room and seems happy. We love him and wouldn't trade him for the world!"

Siberian Huskies are strong, compact, working sled dogs. The medium-sized head is in proportion to the body, with a muzzle that is equal in length to the skull, with a well-defined stop. The color of the nose depends upon the color of the dog's coat. It is black in gray, tan or black dogs, liver in copper dogs and flesh-colored in pure white dogs. The medium-sized, oval-shaped eyes are moderately spaced and come in blue, brown, amber or any combination thereof. Eyes can be half blue and half brown (parti-eyed), or dogs can have one blue eye and one brown eye (bi-eyed). The erect ears are triangular in shape, and set high up on the head. The teeth meet in a scissors bite. The tail is carried over the back in a sickle curve, not curved to either side when the dog is excited. The large "snow shoe" feet have hair between the toes to help keep them warm and for gripping on ice. Dewclaws are sometimes removed. The medium-length, double coat is thick and can withstand temperatures as low as -58° to -76° F (-50° to -60° C). The coat also comes in a longhaired variety called a wooly coat. The wooly (sometimes spelled woolly or wooley) coat length comes from a resessive gene and is not in most of the kennel club's written standard. Coat colors include all, from black to pure white, with or without markings on the head. The face mask and underbody are usually white, and the remaining coat any color. Examples of common colors are black and white, red and white, brown, gray and white, silver, wolf-gray, sable and white, red-orange with black tips, dark gray and white. Piebald is a very common coat pattern.

Siberian Huskies are loving, gentle, playful, happy-go-lucky dogs that are fond of their families. Keen, docile, social, relaxed and rather casual, this is a high-energy dog, especially when young. Good with children and friendly with strangers, they are not watchdogs, for they bark little and love everyone. Huskies are very intelligent and trainable, but they will only obey a command if they see the human is stronger minded than themselves. If the handler does not display leadership, they will not see the point in obeying. Training takes patience, consistency and an understanding of the Arctic dog character. If you are not this dog’s 100% firm, confident, consistent pack leader, he will take advantage, becoming willful and mischievous. Huskies make an excellent jogging companion, as long as it is not too hot. Huskies may be difficult to housebreak. This breed likes to howl and gets bored easily. Does not do well if left alone for a long period of time without a great deal of exercise beforehand. A lonely Husky, or a Husky that does not get enough mental and physical exercise can be very destructive. Remember that the Husky is a sled dog in heart and soul. It is good with other pets if raised with them from puppyhood. Huskies are thrifty eaters and need less food than you might expect. This breed likes to roam. Siberian Huskies can make wonderful companions for people who are aware of what to expect from these beautiful and intelligent animals and are willing to put the time and energy into them.

Prone to hip dysplasia, ectopy (displacement of the urethra), eye issues such as juvenile cataracts, PRA (primarily in male dogs), corneal dystrophy and crystalline corneal opacities. Breeders can get hip screenings from the OFA and eye screenings yearly from a canine ophthalmologist (AVCO) and register the exam through CERF and SHOR). Also prone to a skin issue known as zinc responsive dermatitis, which improves by giving zinc supplements.

They are not usually recommended for apartments, however they can live in apartments if well trained and properly exercised. Siberian Huskies are very active indoors and do best with a fenced-in large yard. Because of their heavy coats, these dogs prefer cool climates. One has to use common sense with respect to maintaining them in the heat by providing adequate shade and air conditioning. This breed prefers to live in packs.

Siberian Huskies need a fair amount of exercise, including a daily walk or jog, but should not be excessively exercised in warm weather. They need a large yard with a high fence, but bury the wire at the base of the fence because they are likely to dig their way out and go off hunting.

The coat sheds heavily twice a year. During that time they need to be brushed and combed daily.

Siberian Huskies were used for centuries by the Chukchi Tribe, off the eastern Siberian peninsula to pull sleds, herd reindeer and as a watchdog. They were perfect working dogs for the harsh Siberian conditions: hardy, able to integrate into small packs, and quite happy to work for hours on end. The dogs have great stamina and are lightweight. Native to Siberia, the Husky was brought to Alaska by fur traders in Malamute for Arctic races because of their great speed. In 1908 Siberian Huskies were used for the first All-Alaskan Sweepstakes, an event where mushers take their dogs on a 408-mile long dogsled race. The dogs gained popularity in 1925 when there was a diphtheria epidemic in Nome, Alaska. Siberian Huskies were used to bring in the much needed medicine to the people. In the early to mid-1900s Admiral Byrd used the dogs in his Antarctic Expeditions. During World War II the dogs served on the Army’s Arctic Search and Rescue Unit. The Siberian Husky’s talents are sledding, carting and racing. The Siberian Husky was recognized by the AKC in 1930. 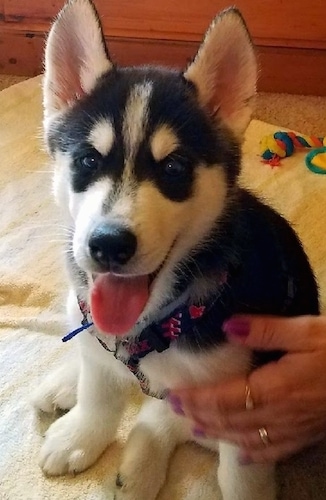 Echo the Siberian Husky as a puppy at 8 weeks old—"We just got Echo 3 days ago and he is amazing! So smart he has already learned to yip at me when he needs to go out and he's learned to sit after he does his business so he can get his treat. I don't even have to say it anymore! He's full of energy and likes to be in whichever room I'm in. I absolutely adore him already" 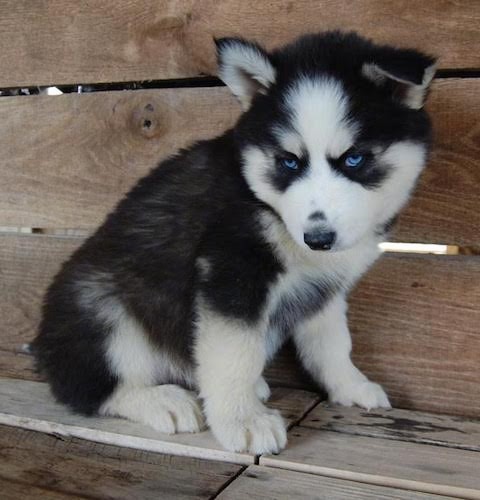 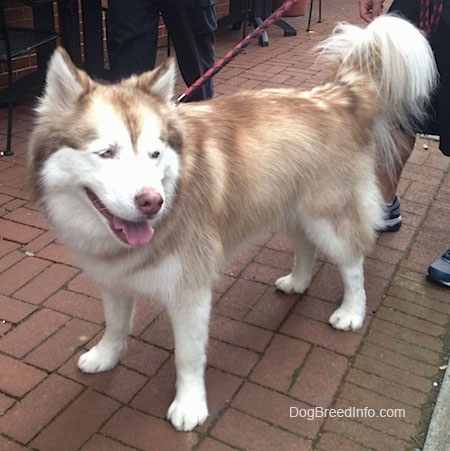 This is Teddy the red and white wooly Siberian Husky with blue eyes at 5 1/2 years old. The longhaired wooly coat (sometimes spelled woolly or wooley) comes from a resessive gene and is not in most kennel club's written standard. 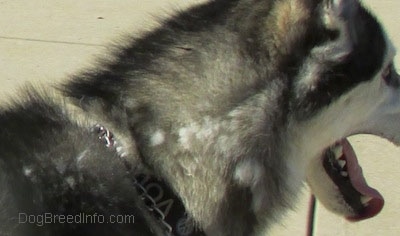 This image shows how the Husky's coat comes out in clumps during shedding season. Brushing the dog helps to remove the hair before it gets all over the house. 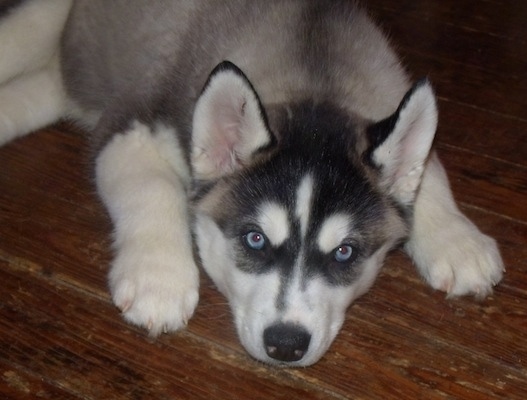 Ace the blue-eyed Siberian Husky as a puppy 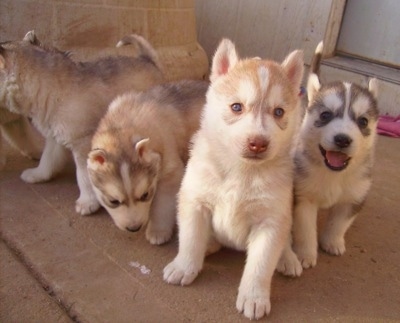 A litter of Siberian Husky puppies sired by Husky (shown above) 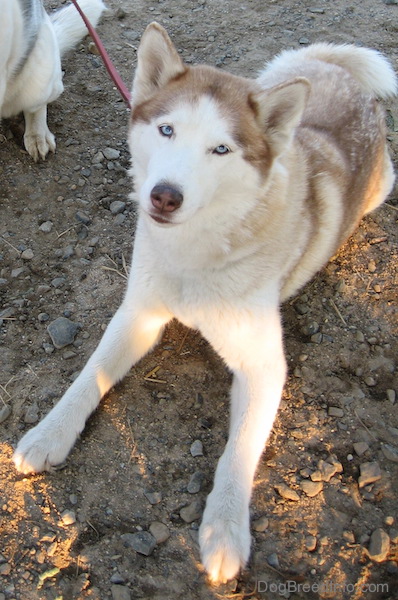 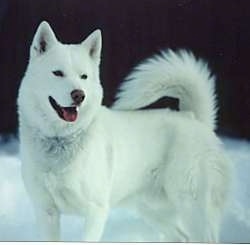 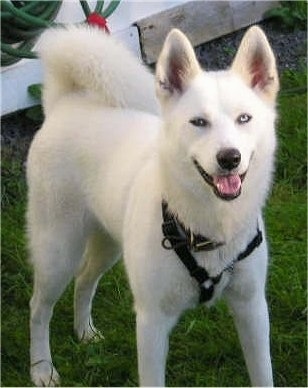 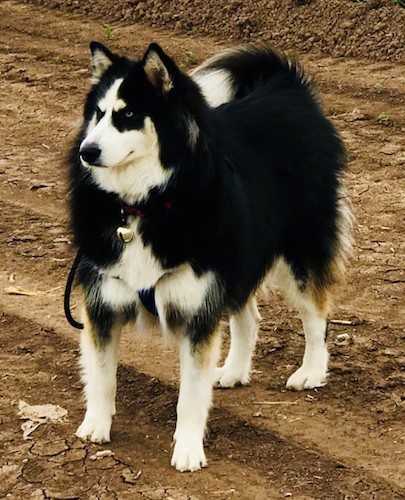