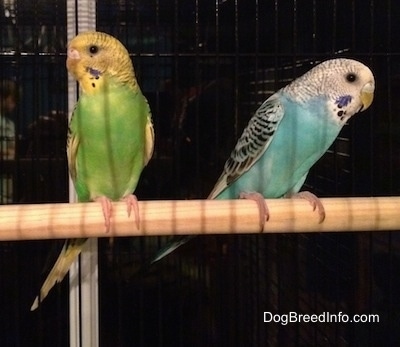 Sprite (left) and Click (right) the budgie parakeets—While out riding bikes one evening my husband and I spotted a little green and yellow parakeet sitting on top of a storm drain in the middle of a busy industrial park. The poor little guy had obviously gotten away from someone and there was no way it would survive living on its own in the harsh climates of our area. We found a large cup that someone had tossed out their window and used it to catch the little bird. We brought him home and settled him in. We named him Sprite. Sprite was noticeably lonely and looked depressed. Very understandable after being out on his own for who knows how long. We decided if we were going to give Sprite a home we had to get him a friend. We bought a second parakeet and named him Click. Sprite and Click hit it off right away. They definitely have different personalities. Sprite is more played back while Click is more outgoing. 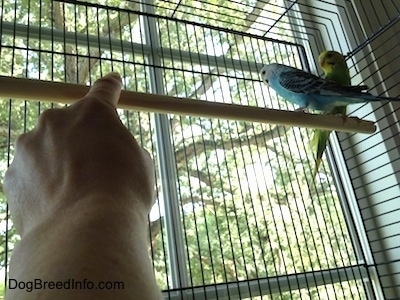 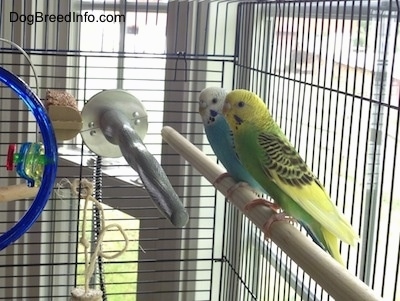 Click (blue bird) and Sprite (green and yellow bird) have only been with us for a couple of weeks now. I have been noticing once in a while that one or both of the birds appear to be cold. They are in a window sill, which is not recommended for the winter months, however it is the middle of the summer and very hot outside. The window is not the issue. If anything were coming from the window it would be heat. It is the central air in the house chilling them. We have it set about 7 degrees warmer than normal and have all the vents near them closed and covered over, yet they sometimes puff out and look like they are trying to keep warm. I decided to buy them a heated perch so they can stand on it if they feel cold. Most parakeets are afraid of new things placed in their cages and these two little birds were no exception. They were terrified of the perch. I placed the perch up high next to where they tend to hang out. Both birds freaked out as I was installing it. They flew around their cage and you could see them breathing fast. I tried to move as slowly as possible. After it was installed the birds moved to the far end of the cage away from it. The birds had not had a millet treat stick in their cage in over a week and I placed one next to the new heated perch. I could see Click eyeing it up with great interest. I realized I was standing at the end of the cage closer to the new perch. The birds are still a little unsure about humans. I took advantage of that and walked over to the end of the cage closer to the birds and away from the new perch. Who was more scary, the human or that new gray perch? Oh the human for sure. The birds moved over closer to the perch. 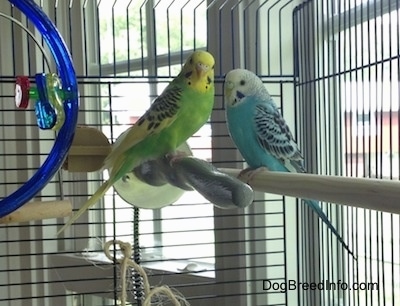 I gave them about a half hour to adjust and came back to do more perch socialization. Unlike when we first found Sprite the birds now chirp away which means they are getting more comfortable with their surroundings, but they are still unsure about hands. Every day I work with them and they usually just move to the other end of the cage. Knowing this I moved to the end of the cage away from the new perch and put my hands up for some socialization. I turned on a parakeet budgie app on my iPhone that played budgies chirping. This calmed the birds and Sprite jumped onto the new perch. Success! Now they have a place to warm their little feet. 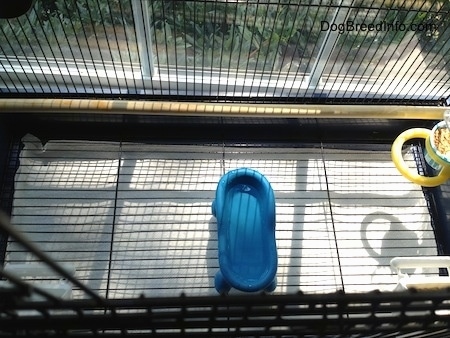 Parakeets are messy little birds. There are two budgie parakeets in a large flight cage that measures 26-inch long, 14-inch wide and 36-inch high with 1/2-inch wire spacing. This is what the cage looks like in the morning after being cleaned. 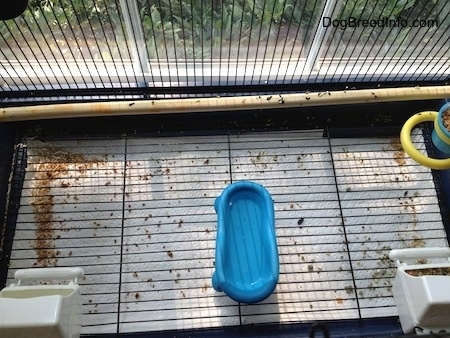 This is the same cage the next morning. There are seeds, poop droppings and little feathers everywhere including just outside the cage on the window sill and on the floor in front of the cage. This cage has a slide out bottom tray that is lined with paper towels to help the cleaning be more manageable. We also have a little mini dust buster that is used to clean the area outside the cage. Avian approved wipes are used to clean up the poop droppings. Be careful what type of cleaner you use as many can harm the birds.