How we solved the problem in less than one week 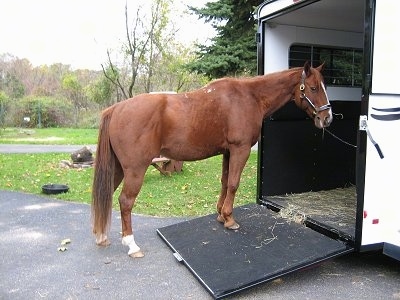 My family and I bought a new horse for our 12-year-old daughter. Jack was delivered to the house, and what a sweet temperament he had. Nothing seemed to spook him and he was very calm. At the time we didn't have a trailer large enough to haul him, so we had not taken him anywhere for about a month. We missed a few rodeos because of the trailer issue. We ended up buying a brand new two-horse trailer to fit Jack and our pony Jazzmine a week and a half before the next rodeo we were to attend. Very excited, my daughter and I put a halter on Jack and led him to the new trailer just to test it out. To our surprise we could not get the horse to get on the trailer. One step on the ramp and his eyes would get wide and he would back up as if he was scared to death. We even managed to get him to take two steps up, getting his two front feet onto the trailer floor, but once again, he'd get wide-eyed and back up very quickly. Here we were with a brand new trailer and a horse that was scared to death to get into it, a little over a week away from the rodeo. We seemed to have tried everything that night to get the horse onto the trailer: luring him on with horse treats, for which he would take a few steps and back out with a great look of fear on his face; blindfolding him, to which he freaked out, backing up before we even got him near the trailer. It was all we could do to get the blindfold off of him. Putting his pony friend Jazzmine on the trailer didn't even help. We tried smacking his rear while leading him in. Nope, that didn't work either. If a 1000-pound horse doesn't want to load and you don't have a few strong men on hand, good luck!

I knew giving up and letting the horse win that night was not always considered the best thing. It's not a good thing to let a horse win a battle. However, it was only my 12-year-old daughter and me. I felt there was no way we were going to get him loaded by ourselves. If we kept trying we might have made the problem worse—Jack would start to associate the trailer with our frustration. We were also not going anywhere and were just trying out the trailer for fun. We had one week to do something about his fear of trailers.

Horses love to eat, so the next day I skipped his morning hay. That afternoon we walked to a nice grassy field where the horses were not currently kept, and handpicked a wagon full of nice green grass. We led Jack out to the trailer and put a pan of his favorite food on the floor of the trailer. We swung the breast bar open all of the way so the area appeared larger to him. Jack put his two front feet on the ramp, extended his neck as far as he could, grabbed the pan with his teeth and proceeded to pull the food out of the trailer onto the pavement! My daughter grabbed the pan and a tug-of-war ensued. She won, and put the pan back in the trailer "OH, NO, NO, NO, Jack, old buddy! If you want to eat, you have to go and get it and eat it in the trailer!" We picked up the pan of food, let him smell it and put it back on the trailer floor, this time keeping hold of it so he could not pull it out.

There the food sat, and Jack was really hungry! He got brave and stepped onto the ramp and ate his bowl of food. "Good Boy, Jack, Good Boy! We then filled his bowl with the fresh grass. If he backed off, he didn't get any more, but once he stepped back onto the ramp he got to eat. 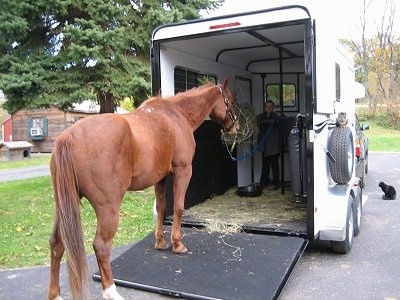 That night we did it again, only placing the pan just a tad further into the trailer. This time his front feet were actually off of the ramp and on the trailer floor! Our hands were stained green from picking grass for him, but we were making progress! Each feeding he was going into the trailer a little further.

On the following morning we filled up a hay bag full of fresh hay and topped it with a load of freshly picked grass. We swung the hay bag on the inside of the breast bar so it was closer to the horse. We fed him his pan of normal food first, halfway into the trailer. Jack now had both front feet in the trailer and his back feet were standing right at the hinge line of the trailer floor and the ramp. With a long stretch of the neck, Jack was able to eat. 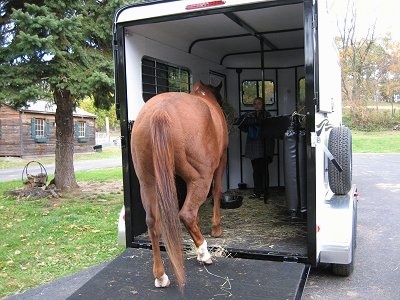 That night we did the same routine as all of the other feedings, only this time we put the hay bag on the other side of the breast bar; if he wanted to eat he had to get those back legs into the trailer. The power of food: Jack stepped all the way into the trailer! We didn't try to put up the breast bar or close the ramp door, not yet. We let him eat. He was in the trailer on his own free will. If he backed out he didn't get to eat. We put him back into his field with no food. We would then get him out and try again. He's a smart horse and realized if he wanted to eat he had to go to the food. 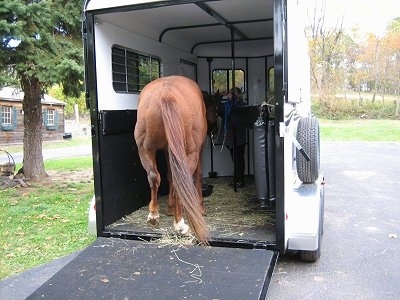 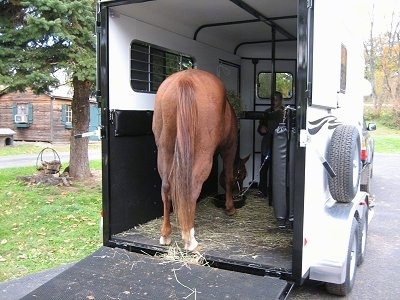 The following day we placed his food in the trailer and made him wait to load. Yes, he had to wait until we allowed him to get into the trailer to eat. We only made him wait a few minutes. While he waited he just stared at his meal. We let him load. My daughter held his feeding pan behind the breast bar, where his head should normally be while riding. Jack ate every bit then started on the hay holder full of fresh grass. This time we put up the breast bar and closed the ramp gate. 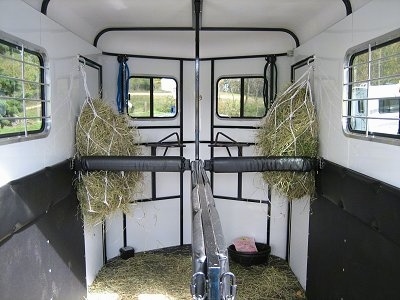 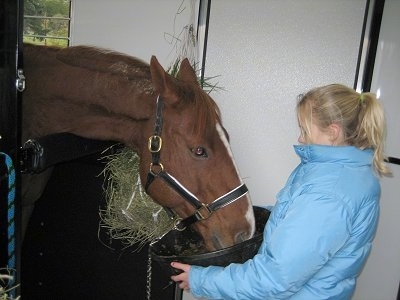 The next day, we decided to load his pony friend Jazzmine on the trailer before him. This would mean the divider would have to be in the middle of the trailer and Jack's area would be smaller. No problem, there was food in that trailer! Good food! 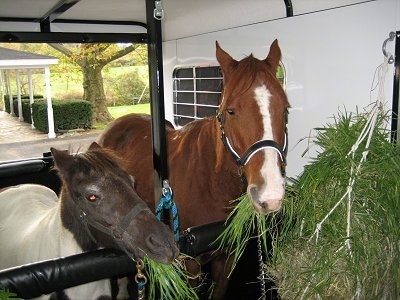 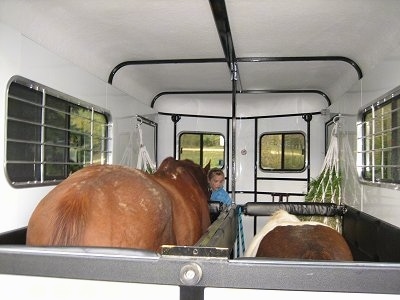 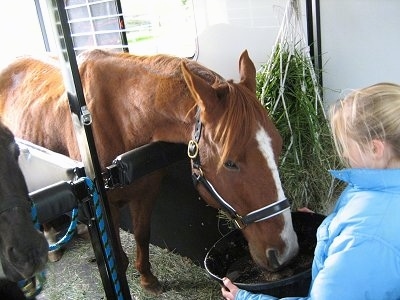 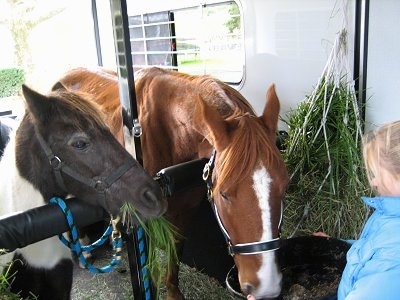 The next feeding we did the same, only this time we drove him around the driveway circle. No problems! Jack now associates the trailer with food, his very own feeding station. This method was very time consuming, but I feel it was the best way to go about it. It worked and I feel in our case, nothing else would have. We now have a horse that is no longer afraid of getting into the trailer, so long as we have food, but that's not as difficult to deal with as a fearful horse. 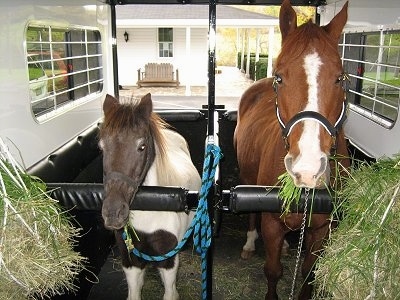 Horses, like people, have their own personalities, which can differ greatly from horse to horse. This means, what works for one horse may not work for another. This was our own personal experience.