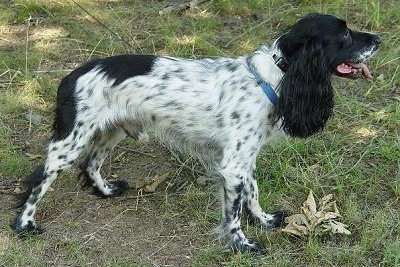 The Russian Spaniel is a relatively small dog with a height at the withers of 38 - 45 cm (15 - 17 3/4 inches). However, the small size does not affect the ability of this dog with a strong, well built, slightly elongated croup and long muscular legs, to work as well in the field as other much larger gun dogs. The Russian Spaniel's coat is skintight, not too long, with wavy fringes on the back of the legs and on the ears. Colors are usually white with dark (black, brown or red) spots and speckles. Head and ears are usually dark in color as well. Other coloring is allowed, and can vary from solids to tricolors. The Russian Spaniel has all the field qualities necessary for a gun dog: stamina, great sense of smell, energy during the search, persistence and inborn willingness to retrieve. These dogs start to work early in life and do not require a lot of training. The goal of a Russian Spaniel during the hunt is to seek out the bird, bring it up into the air, and after the shot and on command to retrieve the game. They are well equipped for the hunt of a marsh, field, woodland, arid-land bird and waterfowl as well as rabbits and other small game. Aside from the Russian Spaniels' hunting abilities, these dogs are great family pets: playful, loyal, great with children and can even perform the duty of a guard dog when necessary.

To its owner, the Russian Spaniel is unparalleled in devotion and ability. It is amiable toward other dogs regardless of the breed. In addition to providing impressive work in the field, the Russian Spaniel makes a good-natured house pets and a reliable watchdog. Great with children, his handsome appearance and agreeable nature make him a good companion, and most are kept at home. Easy to train, the Russian Spaniel is devoted to his master, never letting him out of sight. The Russian Spaniel needs a firm, but calm, confident, consistent pack leader in order to be mentally stable.

Prone to overeating; strict diet must be maintained.

The Russian Spaniel will do okay in an apartment if it gets enough exercise. These dogs are fairly active indoors and a small yard is sufficient. The popularity of this breed in Russia is mainly due to the dogs' small size, allowing people to keep them in the city apartments and easily transport to the hunt site.

The Russian Spaniel has plenty of stamina and needs regular exercise. These dogs should be taken on long daily walks or jogs.

Unlike with most other spaniel breeds, very little grooming is required. The coat repels water. Occasional bath and brushing will keep the dog's coat clean and shiny. Long spaniel fringy ears do need some extra care. This breed is an average shedder.

The Russian Spaniel is the youngest breed among Russian gun dogs. It is included in the larger group of spaniel breeds, and is originated mostly from English Cocker Spaniels and English Springer Spaniels.

The history of spaniels in Russia begins in the end of the nineteenth century, when a black English Cocker Spaniel named Dash was brought to Russia for the great Knyaz Nikolai Nikolaevich, and was shown at the first dog show of the Neva Huntclub in 1885, and at the first Show of the "Lovers of Purebred Dogs Organization" in 1888 in St. Petersburg. Later, more spaniels of this and other breeds were imported into St. Petersburg and Moscow. Even though some of them were used for hunting, these rather small, stocky dogs had very little use in Russian bird hunting conditions. Already in the beginning of the 20th century, lovers of spaniels started selecting more long-legged and active dogs for breeding. They were also importing the Springer Spaniels to mix their blood with that of the existing "mixed spaniel" breed.

By the end of the 1930s, there already existed a large number of spaniels in Russia not fitting the description of any know spaniel breed, but with a set of common characteristics. They were mostly located in Leningrad, Moscow and some in Sverdlovsk. These were no longer the Cocker Spaniels or the Springers, but not the Russian Spaniels yet either. Spaniels were getting more and more popular in Russia. Then, as it is today, the popularity was mainly due to their small size, allowing people to keep them in the city and easily transport to the hunt site, as well as the ease of training and inborn willingness to retrieve game. However, using an existing breed was very difficult because of the very small number of dogs of each breed present in the country. Besides, the hunting conditions in Russian territories created new requirements for a gun dog. All of this stimulated creation of the new spaniel breed, the Russian Spaniel, differing from its parent breeds by stronger build, stamina and less decorativeness. Stories are being told about how hard people worked on saving their spaniels during the Great Patriotic War (WWII), sending them out of the Leningrad blockade across the Ladoga Lake along with their own children. The forming of the new Russian Spaniel continued after the end of the war, when many different types of spaniels were brought into the Soviet Union from abroad. It is possible that pointers were also brought in to improve speed, although this is questionable. Purposeful breeding work allowed to create, based on those saved during the war stock and the imported specimens, the breed type later named the Russian Spaniel. The difficulty of work on the new breed began with high variety of the existing stock. For example, only 14 Cocker Spaniels, 5 Sussex Spaniels, 4 Field Spaniels and 2 Springer Spaniels were displayed at the Moscow Dog Show of 1945. At first the Russian Spaniel stock varied externally and was mostly a mix of Cocker, Sussex and Springer spaniels. Slowly, resulting from careful selection of individual dogs with qualities necessary for domestic hunting, the dogs began to look like the Russian Spaniel of today. Already at the 1949 Dog Show, dog expert V. Dmitrievsky stated, “Most dogs no longer look like the small pre-war spaniels, and are good specimens for the difficult conditions of the Russian hunt. They are a separate type of the Russian spaniel different from the small English Cocker Spaniel.”

In 1951, the first standard of Russian Spaniel, meeting the requirements and inquiries of hunters of the Soviet Union, was developed and established. After institution of the “overall show grade” for Russian Spaniels in 1951, a selection of individual dogs with the best external and field qualities began to improve the breed stock. A somewhat modified standard of the breed was accepted into use in 1966. Since 1972, the Russian Spaniels were no longer crossbred with other spaniel breeds. Large cynological centers have been working on improving the breed. Ever since, the selection of specimens and pairing is done based on the results of the annual shows and field trials, considering all positive and negative qualities. Use of only those dogs with proven hunting abilities allows the avoidance of the division of the breeding stock into show and working dogs. As the result, the dogs are both beautiful and have hunting instincts. Today, special attention is paid to stabilizing the height and hair coat heredity, selecting pairs based on the pedigree, hunting and exterior qualities.

As a result of this purposeful breeding, the Russian Spaniel of today is a dog well equipped for the hunt of a marsh, field, woodland, arid-land bird and waterfowl in conditions of the Russian territories and neighboring countries. The goal of a Russian Spaniel during the hunt is to seek out the bird, bring it up into the air, and after the shot and on command to retrieve the game. Field trials on blood trails also proved their usefulness in search of rabbits, some types of hoofed game, etc. The Russian Spaniel has all the field qualities necessary for a gun dog: stamina, great sense of smell, energy during the search, persistence and inborn willingness to retrieve. These dogs start to work early in life and do not require a lot of training.

All of the above qualities resulted in the popularity raise of Russian Spaniels, and consequently, the increase of their numbers. Moscow dog shows of the last 20 years annually include 120 to 131 Russian Spaniels, in numbers shown sharing the first place only with the Irish Setters. In addition to the traditional centers of Moscow and St. Petersberg, new cynological centers were created in Kirov, Saratov, Tambov, Ryazan, and Cherepovets, demonstrating an even more increasing popularity of the Russian Spaniels all across Russia.

Owners of Russian Spaniels are as loyal to their dogs as dogs are loyal to them. So when some of them immigrated to the United States or Canada, their canine friends came along. Some immigrants, remembering these wonderful dogs, purchased puppies from Russia and had them flown in. Many times a Russian Spaniel owner had to answer curious passerby’s question about the beautiful dog, walking along at the park or on the street, since the breed is completely unfamiliar to most Americans and Canadians. AKC and UKC do not recognize the breed, and most books do not even mention it. Unfortunately, it is unknown how many Russian Spaniels crossed the ocean, and all of them are scattered throughout the enormous territories of the United States and Canada. 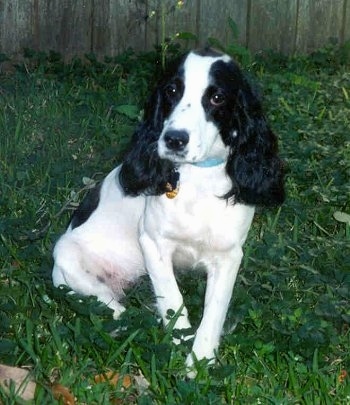 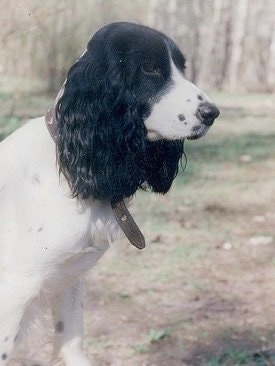 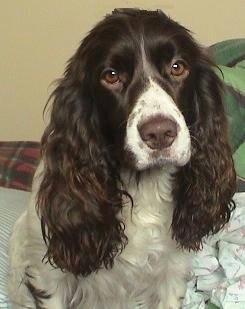 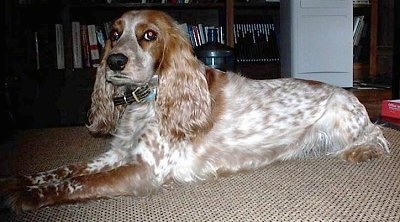 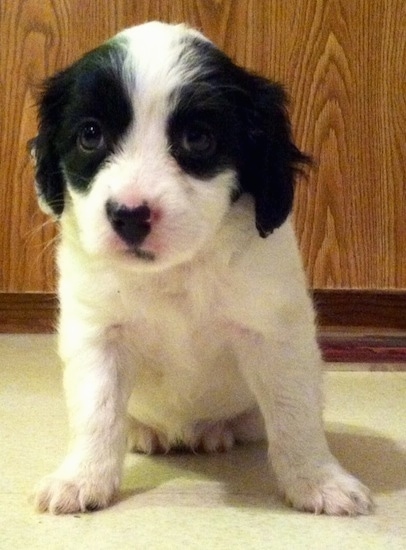 "This is our Russian Spaniel puppy at 6 weeks old. She sleeps a lot." 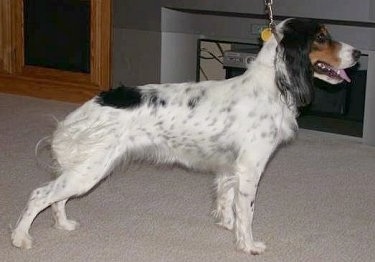 Beloshka (aka Belka) of AZ, photo courtesy of the Russian Spaniel Club