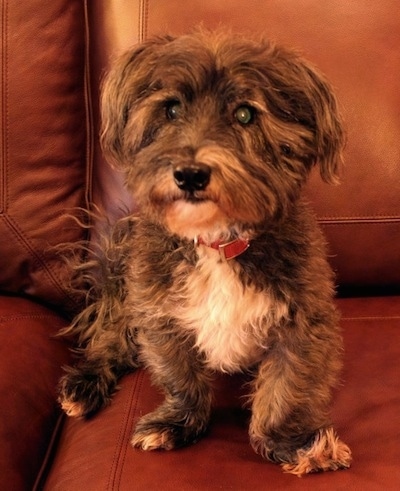 Harry the Scotchon (Bichon / Scottish Terrier) at 15 years old—"Harry has gone through some changes, but fortunately, he's handling the senior life fairly well. The signs of old age include reduced hearing and vision. He lost a tooth (bottom row, front) and the two next to that spot are loose. His breath is terrible. Harry's not willing to throw in the towel any time soon, though. He may sleep more, but he's still quite energetic, chasing a ball around the house, running circles in the living room when a guest comes over, and barking incessantly when the mood strikes. He can stand for long periods on his hind legs. All this despite having had a torn cruciate ligament several years ago and a perpetually twisted front leg that veterinarians warned would give him arthritis by the time he turned six or seven. People have a hard time believing he's 15, and I don't blame them. His diet, in case you're interested, has been mostly high-end dog foods, but not any one brand in particular. Treats include Alpo "Snaps" and Charlie Bears, and he has gotten a small Milk Bone biscuit every night before bed since he was a puppy. Because of the twisted front leg, we've given him a daily joint supplement over the past few years (sold by Trader Joe's).

The Scotchon is not a purebred dog. It is a cross between the Bichon Frise and the Scottish Terrier. The best way to determine the temperament of a mixed breed is to look up all breeds in the cross and know you can get any combination of any of the characteristics found in either breed. Not all of these designer hybrid dogs being bred are 50% purebred to 50% purebred. It is very common for breeders to breed multi-generation crosses. 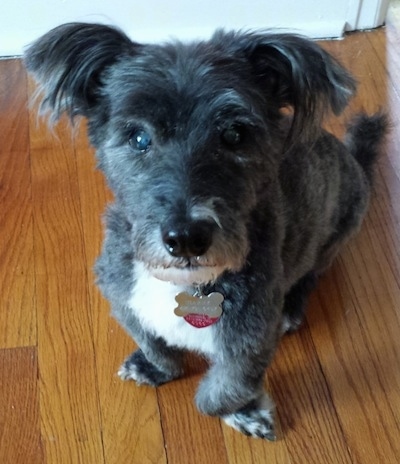 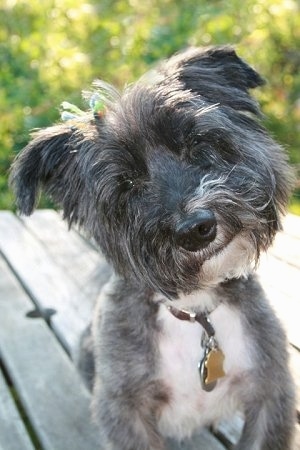 Harry the Scotchon (Bichon / Scottish Terrier) at 8 years old—"It's easy to get him to turn his head like this when you say "boy?" or mention the name of one of his favorite treats, "Charlie Bear." This picture was taken the day he was trimmed. This is a great look for him, distinctive facial hair with real short body hair. Harry weighs between 14 and 15 pounds. He was the smallest of the litter. He's still very feisty. He loves to play with his various toys, runs like a rabbit around the yard, and barks at E-V-E-R-Y-T-H-I-N-G. He goes ballistic if he sees a fly in the house, he barks at passing cars, he goes nuts when visitors come over (but calms down within a few minutes), he chases reflections of light, the sound of certain faucets in the house make him crazy...you get the picture. He acts aggressive around other dogs but can learn to get along. Maybe he's compensating for his small size, because he's not afraid of dogs weighing 100 pounds! That is, unless they bark back. In the evening, he's content to chew a rawhide while we watch TV, and usually he jumps onto our laps to relax with us. He's affectionate, but he doesn't go overboard. These photos don't show it well, but Harry's front legs have a peculiar bend—if you look at the 8-year photo, imagine his "wrists" coming within an inch of one another, with both paws facing outward. His vet believes he might have arthritis later in life and we'll begin to give him a supplement next year. They tell us he'll be a senior next year, but with his boundless energy, I'll wait until he slows down before I modify his diet. Harry is truly a member of the family and he gets a ton of love. While the current hybrid designation is Scotchon, the breeder called him a Scottychon. It seems the combination might be a tad suspect; mixing a somewhat aggressive breed with a timid breed makes for something, well, schizo. He once bit my son (in the mouth) so we enlisted the aid of a behaviorist to help us correct the behavior. Even he questioned why anyone would create this particular hybrid. Of course, looking down at little Harry's sweet, upturned face, the behaviorist said, "Well, it's obvious why they put those two dogs together." 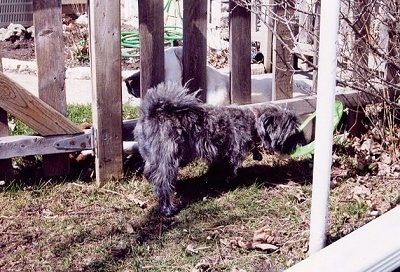 Harry the Scotchon (Bichon / Scottish Terrier) at 6 years old—"Notice his wedge-like stance and that tail over his back." 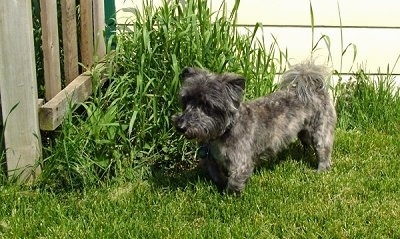 Harry the Scotchon (Bichon / Scottish Terrier) at 3 years old—"In this picture you get a good look at his stance. Longer hind legs, with paws turned outward on his shorter front legs. His shoulders are wide compared to his hindquarters. When he's happy and healthy, his tail curls over his back. On the rare occasion Harry isn't feeling well, or he's in trouble, his tail hangs limp." 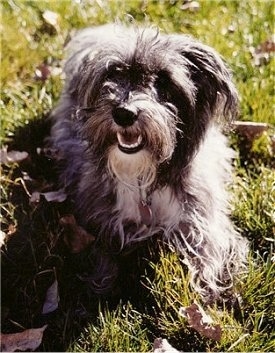 Harry the Scotchon (Bichon / Scottish Terrier) at 2 years old—"The two-year photo shows what he looks like if you don't get him trimmed. We think he's much cuter when he's trimmed." 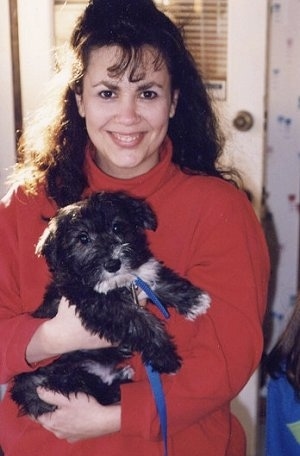 Harry the Scotchon (Bichon / Scottish Terrier) at 5 months old—"At 5 months, you can see that he was a cute little fur ball, with black and white coloring. Sometime after his first year, Harry had turned an ash color."