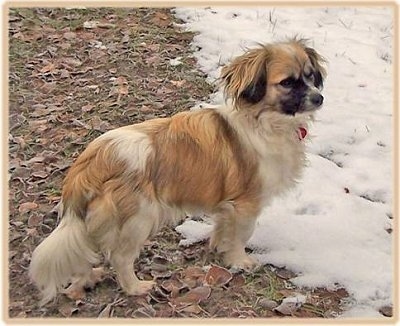 "Missie is our Cavalier x Tibetan Spaniel mix (Tibalier). She is full grown and 12 pounds. Her temperament is very much a blend of both breeds, very cuddly, but as well incredibly curious and outgoing. She is unflappable, loves commotion and is great with my children and their friends. She also tends to be independent minded, a little stubborn to train, and will test the fence. She will bark to alarm us of strangers, but other than that reserves barking. Her coat is very easy to care for, with a brushing usually only once a week. She has the parti-coloring of the Tibetan Spaniel. Many of her littermates were a diluted Blenheim."

The Tibalier is not a purebred dog. It is a cross between the Cavalier King Charles Spaniel and the Tibetan Spaniel. The best way to determine the temperament of a mixed breed is to look up all breeds in the cross and know you can get any combination of any of the characteristics found in either breed. Not all of these designer hybrid dogs being bred are 50% purebred to 50% purebred. It is very common for breeders to breed multi-generation crosses. 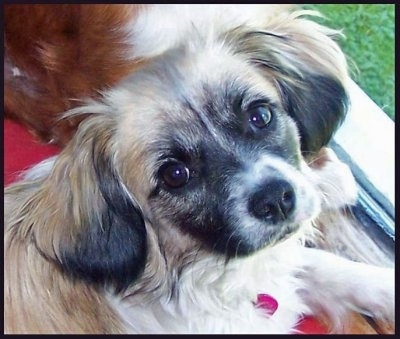 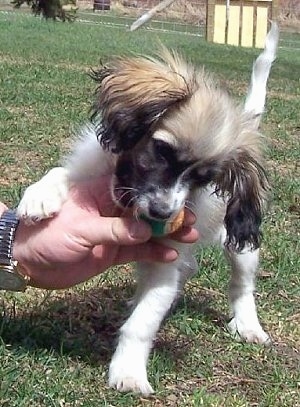 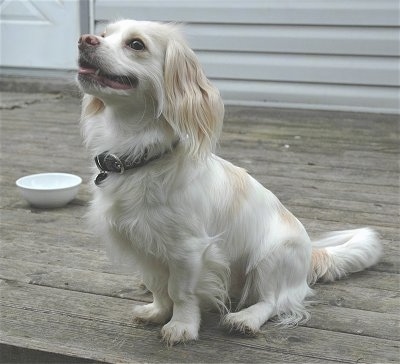 Diamond the Tibalier (Cavalier x Tibetan Spaniel hybrid) at 14 months old, weighing 13 lbs.—she was fully grown at 10 months. Diamond is one of Missie's littermates. "Diamond thinks she's a BIG dog! At the dog park, she'd rather play with dogs bigger than her. She's just always been like that. Not that she doesn't play with dogs her size. She just LOVES to play...with anyone! But she tires the little dogs her size out so easily...I don't know where she gets all her energy from! It's funny ’cause the dogs (even the big ones) lie down to take a rest and Diamond is just nonstop pulling at their ears and tails and anything she can do to get them to chase her.

"Sometimes I take her to playcare; it’s like doggie daycare where I can just drop her off and she can play with other dogs. My friend Lyndsey works there and she says Diamond gets put with the little dogs first, and she's so overly playful and rambunctious that she tires them all out, then gets put in with the big, big dogs, and she gets them ALL to chase her around. Lyndsey says it's too funny to watch, ’cause she runs under their legs and they get confused. She can also stop on a dime and run the opposite direction.

"She has also gotten a lot of compliments on her agility. What I think has helped her is the fact that she has so much fur on her feet and in between her toes, and plus we have all hardwood floors so she was slippin’ and sliding all around the house, it took her a couple weeks but she's got it down! Now you put her on any other surface, grass, dirt, cement, gravel…she can stop and turn on a dime and do it over and over again till the other dogs give up. It is so super fun to watch her do it. People tell me I should train her for those dog obstacle-course things…maybe I will one day!" 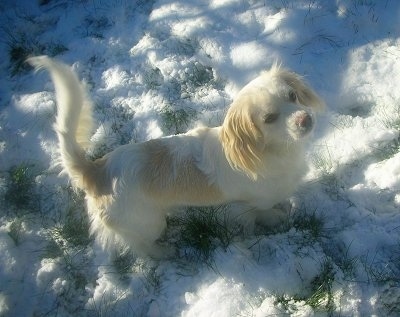 "We have a pretty big backyard, which she loves to play in all the time and I take her to the dog park as often as I can. I like taking her there ’cause I feel that is the only true way of using up all her energy, by playing with other dogs. Diamond is very quick at running up and down our stairs. Our house is 3 stories, so she got that down very quickly as well. Diamond does that rolling thing…and she is up on her feet and off in the other direction so quickly! She definitely likes being high up, above everything. I've read that about Tibetans. She likes to sit on the top of the back of the couch and the 3rd floor deck, and is positioned like a sphinx…observing all around her from her high place, but she also likes to cuddle!!

"She does what I like to call, sharing her toys…she'll select a toy from her basket, a very specific one, and sit in your lap, and play with it, if you hold the other side of the toy. If you don't hold it, she'll keep trying to put it in your hand until you do. It's super cute. She does that sometimes, and other times she's content with just playing with it on her own, but still in your lap. If the toy falls off your lap, she'll jump down and get it and put it back in your lap again so she can play with it.

"She has a big white basket where we keep all her toys, she has access to it all the time, and I am amazed sometimes just to watch her very carefully dig around inside the basket until she chooses just the toy she wants…I wonder how she decides which one she'd rather play with.

"Diamond definitely is a licker!! That is actually one of her "things" she's remembered for. (That and also she looks exactly like the dragon from The NeverEnding Story!), but yeah, she will lick all of our visitors to death! I thought all people love doggie kisses, but I guess some don't. This past summer we've learned that she likes to lick people's feet, ’cause they were all wearing flip flops…and she would lick them to death! She also likes to lick my dad's neck when he comes to visit. She sits on the top of the couch and when he sits down is when she attacks him! It tickles him and makes him laugh. Whenever she meets anyone new, either by visiting our home or taking her out to the park or beach…she licks their hands. Sometimes they don't even get a chance to pet her ’cause she wants to lick their hands so much. People think it's sweet. If you pick her up, she is guaranteed to lick your face. I have taught her to lick my face on command when I make the kissy-sound.

"Every day, after our shower, she loves to jump in the tub and lick all the water droplets on all the sides and the floor of the tub!! It's funny cause Diamond KNOWS where her water bowl is, and she has access to it all the time, but I guess she'd rather lick it off the tub…ha-ha. On top of that, she actually likes to jump in the tub WHILE we're taking a shower and licks at the water shooting at her face. She loves to stand there and do that for several minutes. It's gotten to the point now that we keep her shampoo in the shower next to our stuff and a towel just for her in our bathroom and I bought her a little bathrobe to put on so she doesn't shake around the house. We don't shampoo her every time, just when she starts to get a doggie smell, but she gets a nice rinse every day! She's probably one of the cleanest dogs I know. She's very happy when she's all wet! She likes to run at top speed around the house once she's got her bathrobe on. We like to say that's she's air drying herself!! Needless to say, it isn't very hard to bathe her. She loves it!

"Diamond does this thing, we call it her "psycho run," once a day, not always at the same time, but always once a day, where out of nowhere, she'll just decide to run around the house at full, FULL speed for a good 2 minutes straight, all the while growling and grunting. Then she'll stop and be totally calm all over again. It's the weirdest thing!! At first we thought she had a split personality and were kinda weirded out by it, but now we're used to it. It really just comes out of nowhere!!! So we could never figure out what triggers it!

"Diamond isn't so good about getting brushed. I would LOVE to use the slicker brush on her more often, but she absolutely hates it! I have to resort to using the Zoom Groom, made by the same people who make Kongs. It works well enough, but doesn't get it all like a slicker. Diamond will run away as soon as she sees it in my hands. It's frustrating ’cause her hair is all over the place! I vacuum everyday (we have a Roomba) so it’s not bad, but I wish it wasn't on our clothes so much. Also, we cut her nails every two weeks. We don't like them to get long, as she is inside mostly and always on our bed and likes to sleep on the laundry and we don't want anything getting snagged. My husband also worries about the hardwood floors, but I think she is too light to do any harm. She's getting better with it; it used to be no problem until once I accidentally cut her too close and now she doesn't trust us anymore. We have to give her plenty of treats as we cut, and she is slowly but surely regaining our trust, but still wiggles a whole lot. I feel the more we do it, the more she'll get used to it and hopefully soon it will be a breeze again." 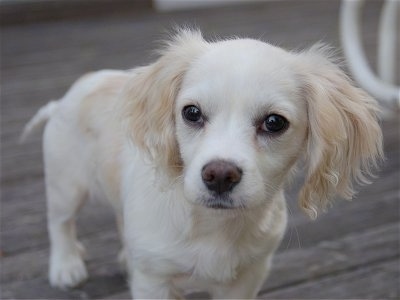 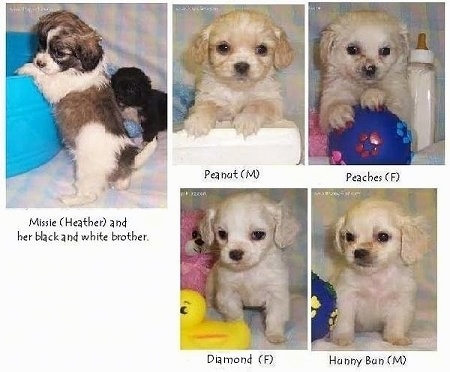