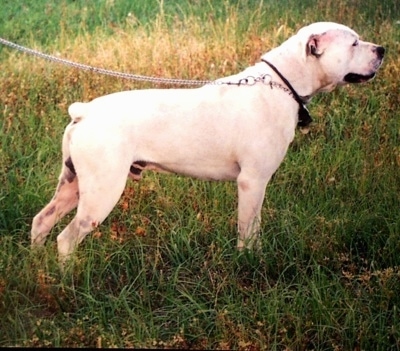 The White English Bulldog (WEB) is a moderate-sized, agile-bodied dog standing on moderate but powerful legs of average bone. The neck should be solid; shoulders should be well muscled and well defined. Elbows should be in line with the dog's shoulders and feet. The musculature is not extreme or bulging as to allow for agility, quickness and endurance. The coat is coarse with slight feathering on backs of hind legs. Coat colors include white, with or without patches of color, shades of red brown, all shades of brindle; never covering more than 25% of body. Black-only pigmentation and spotting is found on the skin, around the eyes, on the nose and lips and the genitalia. The head is square with noticeable or moderate stop. Supra-orbital arches pronounced with a center crease between the eyes to the back of the head. Muzzle square and broad, half brick 2 1/2" to 3 1/2". Bite: Scissor, reverse scissor to 1" under at most. The ears are rolled or flapped. The eyes can be any shade of brown, amber okay; blue is considered a fault in the breed. The feet are round and compact with noticeable webbing between toes. When the tail is not docked, it is thick at the base and feathered at the end.

The White English Bulldog is a family and livestock protection dog. It is a controller and retriever of the roughest livestock, even in wetlands. It suffices as an all-around hunter from treeing squirrels to bears. A very old and extremely rare breed in its true form, the WEB is a medium to large dog bred as an all-around farm and stock dog, specifically for protection of such. It is loyal and fiercely protective of its master, the master's family, property, livestock and especially the children. As with all dogs, be sure you are this dog's true pack leader, and it will be submissive to its handlers. The WEB is not bred to be a hunting dog, though it suffices adequately.

Health problems are very few when bred properly and true to the breed’s origins and uses.

Living conditions are described as those for a farm dog: large, open areas with free run. Most do not do well in kennels or indoors. These dogs need to work and perform their duties. Failure to allow them to do so can result in destructive behavior and/or a failure to thrive that could very easily lead to the death of the dog.

Needs a job to do. If the dog is in between jobs, for example, between hunting seasons, it needs to be taken for at least a long daily walk.

Origin is southern Georgia and northern Florida during the 16th and 17th centuries. 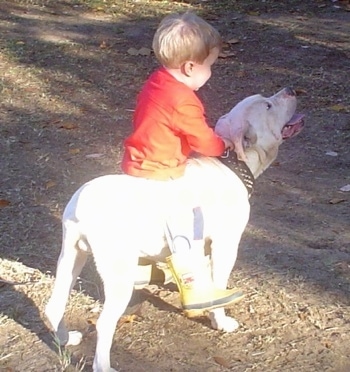 "Jack the White English Bulldog and his little buddy, Nicholas—Jack is a working farm dog whose duties include guarding the property, the family, the livestock, separating and moving both cattle and swine, and holding them when needed. When not working the stock, he is full-time guard dog and playmate. Jack works alongside his dam in his duties." 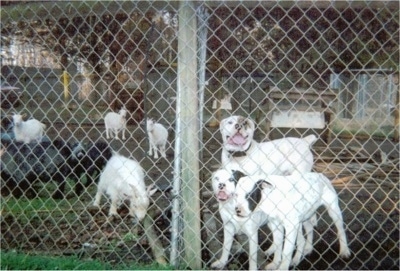 "Lane's Otis, Mary and Diamond watching over the goats—the WEB works as a team to perform its tasks, yet is quite capable of working alone." 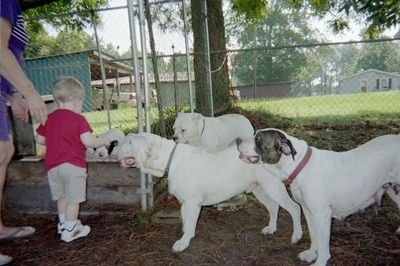 "Adult male and two adult female WEBs, one of which is a nursing mother, stand back to allow their master to enter the puppy pen—they have simply been told to stay back and do not require being held back by force. Notice the mother dog is watching her master for further instruction." 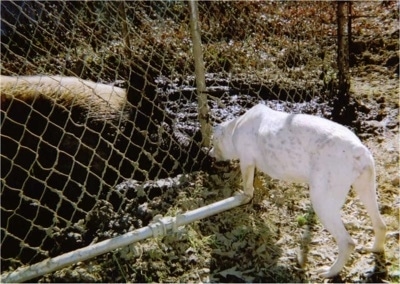 "Lane's Patchee checking on the hog—notice she is not showing aggression or any sign of prey drive toward the hog. She is greeting it." 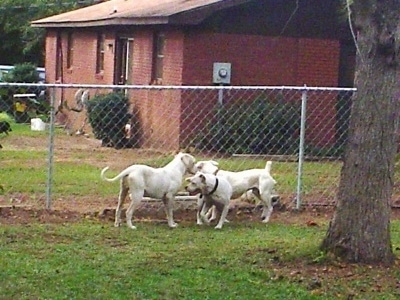 "Two adult males and one adult female WEB work together to make the rounds around the property in their guarding duties."