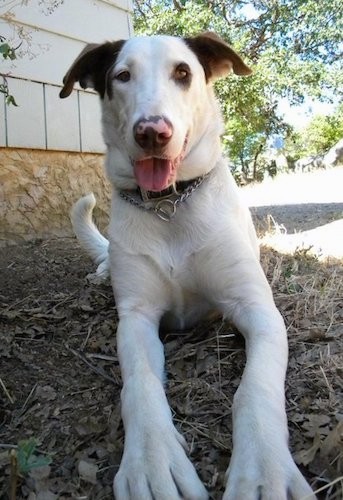 " This is Roe Roe, my 18 month old Smooth Collie/Australian Shepherd cross. He weighs about 85 lbs. I adopted him from a local shelter at 5 months old. He is a wonderful dog. He has a fantastic temperment and is wonderful around people. One firm "NO!" from me will stop him from what ever he is doing and he lays down immediately. He has amazing recall and will come off anything I ask him too. He is very sensitive to discipline and yelling at him or trying to get him over his fears makes him wet himself. He is afraid of wood being chopped, crinkly paper and becomes very shy when he has done something wrong. He is very self entertaining, I usually only have to throw his ball once and the rest of the time he is throwing it in the air himself and playing alone. He is very very protective of me and my vehicle and lets people with ill intentions no where near. I take him with me everywhere and he gets about 3 hours of hard playtime a day but is perfectly happy just hanging out in the car all day. He adores people, kids and other animals, but if they run he WILL chase them and knock them down. He enjoys finding random objects and packing and throwing them around, such as pieces of wood, leaves, socks, his toys, even an ice cream box he found from who knows where. He has a very noble appearance and has a way of making your heart melt with his expressions."

The Aussie Collie is not a purebred dog. It is a cross between the Australian Shepherd and the Collie. The best way to determine the temperament of a mixed breed is to look up all breeds in the cross and know you can get any combination of any of the characteristics found in either breed. Not all of these designer hybrid dogs being bred are 50% purebred to 50% purebred. It is very common for breeders to breed multi-generation crosses 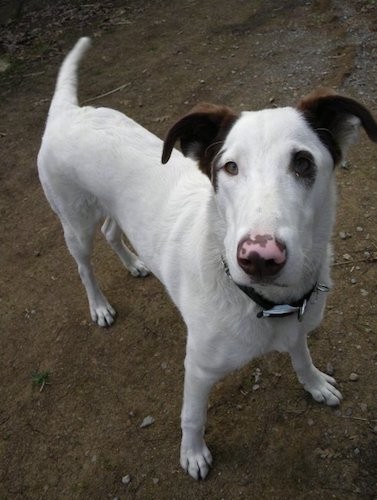 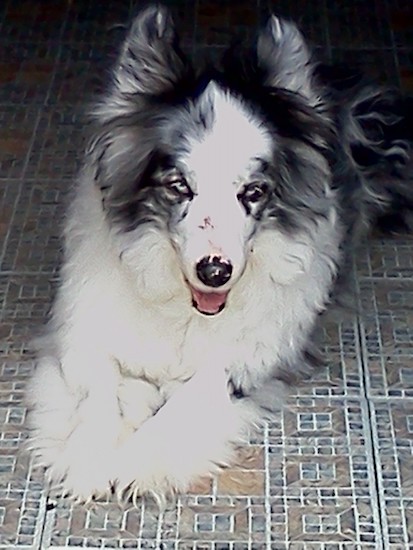 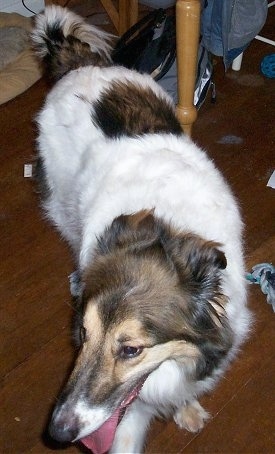 "This is our Australian Shepherd / Collie mix (I call him an Australian Collie). His name's Max (full name, Maximus). We adopted Max when he was 5 years old. His birthday's February 22nd. He's a great dog and loves little kids, any person who'll pet him, and he loves Blizzard (our Bichomo who's on your site) and herds her in the backyard like she's a sheep. He has a great personality, too! He's laid back and will sleep all day if you do. He is such a sweetheart and talks a lot like a Collie does! He has a docked tail like an Aussie and has the voice of a Collie. He's protective and will bare his teeth and growl if you do it to him. He's a trash-picker but that's really his only bad behavior. He hates bikes for some reason and we think he had been in an abusive home ‘cause he hates the words ow, ouch, help, stop it, etc. He also hates the smoke detector going off and he goes into a submissive posture and waits to be hit if he's yelled at for getting in trouble. We all love him so much and would never think of getting rid of him. He's such a good boy. He loves walks, won't run away when out in the yard (unlike Blizzard), and when we got him he could already sit, lie down, paw, other paw, and he can say 'I love you'! That's what won us over. He had been sitting quietly in his kennel at the animal shelter. I had read he could say ’I love you’ so I asked him to say it and he did, which drove him into a barking frenzy so we had to take him. Go figure, we wanted a small dog for Blizzard and we got 65 lbs. of fluff. But I'm glad we got him, even if he does think he's a lap dog and he takes up the whole bed if you want to sleep. He's a great dog and proves that even a sad-looking shelter dog only wants to get out and get a home and can be the best pet ever."