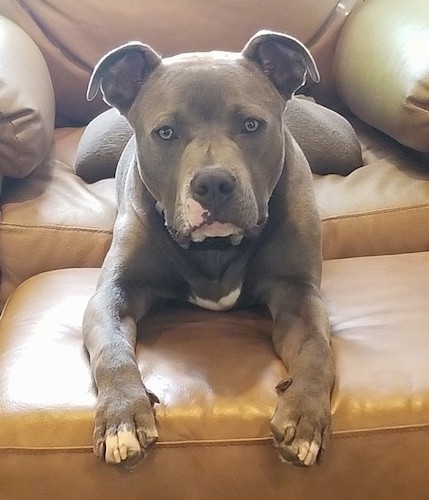 "This is Mana! I rescued him at 10 months. He's now a year and a half old. He's a blue nose American Staffordshire Terrier weighing 60lbs and standing 19 inches tall at the shoulders. He is nothing but a love bug always wanting to lick and play! Such a misunderstood type/breed."

The American Staffordshire Terrier (Am Staff) is extremely strong for its size. Agile, very muscular and stocky with a broad, powerful head. The muzzle is medium in length and rounded on the upper side to fall away abruptly below the eyes. The eyes are dark and round, low down in the skull and set far apart. Pink eyelids are considered a fault according to the AKC standard. The jaw is very strong. The lips are to be close and even, no looseness or dewlap. The ears are set high on the head and can be cropped or uncropped. Uncropped is preferred and should be short and held rose or half prick. The teeth should form a scissors bite. Its coat is made up of thick, stiff, glossy hair. All colors, solid, parti, or patched are permissible, but according to AKC standard it is not encouraged for dogs to be more than 80% white. The un-docked tail is short compared to the dog’s size and tapers to a point. Classed by AKC as "American Staffordshire Terrier" and by UKC as "American Pit Bull Terrier," the American Staffordshire Terrier is generally of larger bone structure, head size and weight then its cousin the American Pit Bull Terrier.

The American Staffordshire Terrier is an intelligent, happy, outgoing, stable, and confident dog. Gentle and loving toward people, it is a good-natured, amusing, extremely loyal and affectionate family pet. It is good with children and adults. Almost always obedient, this dog wants nothing more than to please its master. It is an extremely courageous and intelligent guard dog that is very full of life. Over the past 50 years, careful breeding has produced this friendly, trustworthy, dog that is an especially good dog for children. Courageous and a persistent fighter if provoked. Highly protective of his owners and the owner's property, it will fight an enemy to the death if the enemy traps the dog in a corner and threatens its loved ones. This breed has a very high tolerance for pain. Some un-socialized Staffs may be dog aggressive. Socialize very thoroughly when young to curb any dog aggressive tendencies. This breed can be difficult to housebreak. It has given outstanding results as a guardian of property, but is at the same time esteemed as a companion dog. When properly trained and socialized, the Staff makes a great family companion. This breed is not for the passive owner who does not understand that all dogs have an instinct to have a pack order. They need a firm, confident, consistent owner who understands how to display proper leadership. The objective in training this dog is to achieve pack leader status. It is a natural instinct for a dog to have an order in its pack. When we humans live with dogs, we become their pack. The entire pack cooperates under a single leader; lines are clearly defined. You and all other humans MUST be higher up in the order than the dog. That is the only way your relationship can be a success.

Some are prone to heart murmurs, thyroid problems, skin allergies, tumors, hip dysplasia, hereditary cataracts and congenital heart disease. Also Ataxia, which is a very serious health problem in the breed. There is a genetic test for ataxia through a company called Optigen. If you are looking for an AmStaff it is wise to ask any breeder if their puppies are guaranteed free of ataxia or not. Its a recessive trait, so if 1 parent is tested Ataxia clear then they can safely know that the puppy won't be affected by the disease.

Staffordshire Terriers will do okay in an apartment if they are sufficiently exercised. They are very active indoors and will do alright without a yard. This breed prefers warm climates.

Daily exercise is paramount. Without it the American Staffordshire Terrier will become hard to handle. They need to be taken on long daily walks/jogs or runs. While out on the walk the dog must be made to heel beside or behind the person holding the lead, as instinct tells a dog the leader leads the way, and that leader needs to be the human. Teach them to enter and exit door and gateways after the humans.

The smooth, shorthaired coat is easy to groom. Brush on a regular basis with a firm bristle brush, and bathe or dry shampoo as necessary. A rub with a piece of toweling or chamois will make the coat gleam. This breed is an average shedder. 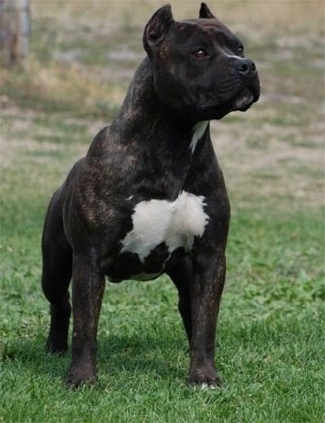 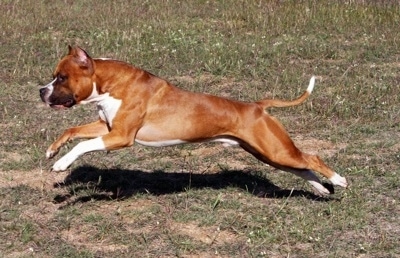 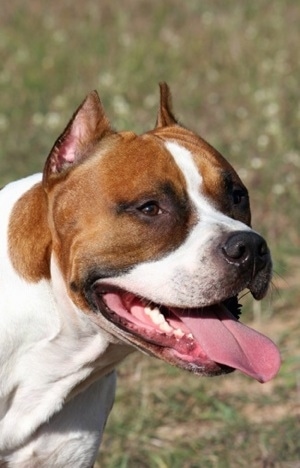 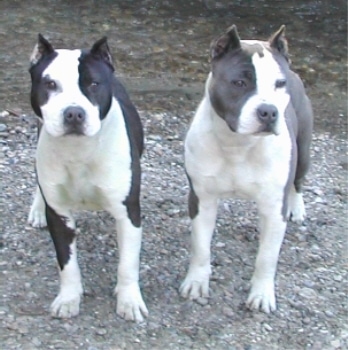 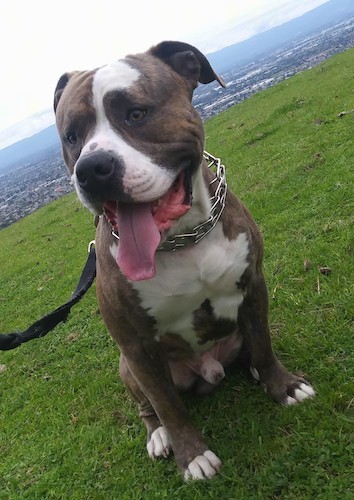 "This is Chance a blue-nose brindle at 3 years old. He belongs to my fiance Michelle. He's quite the clown of the house with endless energy and affection. He is a registered Emotional Support Animal (ESA)." 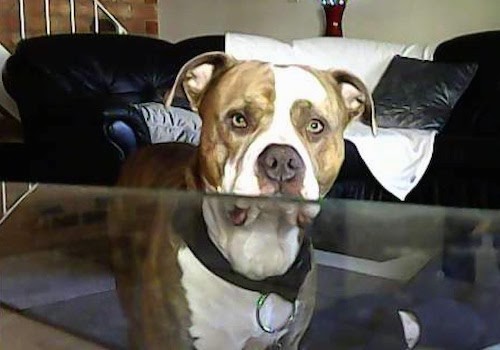