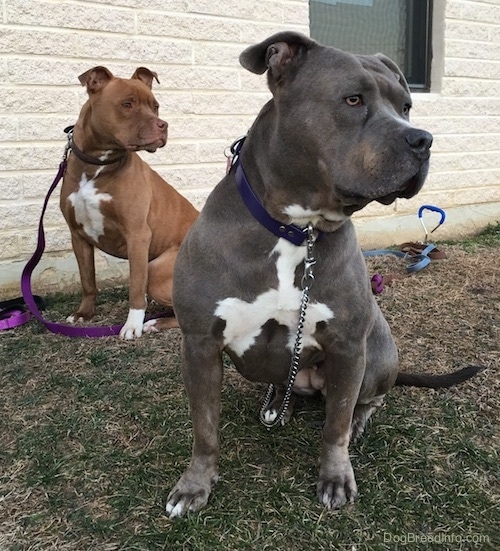 The Pit Bull immediately strikes one as being a dog of power, passion and undying willingness. The brick-like head, which is especially broad between the cheeks (to house the powerful jaws), is carried upon a thickly muscled, well-defined neck. The neck runs into a deep, thick, well-sprung chest. The American Pit Bull is a very muscular, stocky, yet agile dog that is extremely strong for his size.The tail tapers to a point. The ears are generally cropped, though this is optional. Docked tails are not accepted by the UKC or the ADBA. The eyes are round. Both the ADBA and the UKC do not accept blue eyes or the coat color merle. The American Pitbull Registry does accept a merle coat. The teeth should form a scissors bite. Its coat is made up of thick, short, shiny hair. All colors are admissible. Shades of brown to red with a matching red/brown nose are referred to as red-nose Pit Bulls. Shades of gray with a matching gray nose are referred to as blue-nose Pit Bulls.

The American Pit Bull Terrier (APBT) has a strong desire to please. The APBT has evoked more human emotional, rational and irrational response than any other breed that exists today. By no means are these dogs people-haters or people-eaters. Their natural aggressive tendencies are toward other dogs and animals, not people. However if they are properly socialized with a firm, but calm, confident, consistent pack leader, they will not even be aggressive with them. The American Pit Bull Terrier is a good-natured, amusing, extremely loyal and affectionate family pet that is good with children and adults. Almost always obedient, it is always eager to please its master. It is an extremely courageous and intelligent guard dog that is very full of vitality. Highly protective of his owners and the owner's property, it will fight an enemy to the death. It is usually very friendly, but has an uncanny ability to know when it needs to protect and when everything is okay. The American Pit Bull Terrier can be willful with meek owners and needs a firm hand. They are generally okay with other pets if they are raised with them from puppyhood. They are very friendly, but not recommended for most people, because most people do not understand how to properly raise and treat a dog. Problems arise when one does not understand natural dog behavior, seeing the dog as having human emotions, and ends up with a dog who thinks he is the boss of the house. For a smaller, not as powerful dog, people can sometimes get away with this, however, for a powerful breed, one really needs to understand and follow this concept of keeping a dog. Excellent with children in the family, they have a high pain tolerance and will happily put up with rough child play. As with any breed, they should not be left alone with unfamiliar children. Used as all-around working farm dogs, they were referred to as "the poor man’s horse." Later they were used as fighting dogs; the powerful American Pit Bull may go for the throat of strange dogs. A minimum of training, along with the proper amount of exercise and a firm pack leader, will produce a tranquil, obedient dog. Socialize very thoroughly when young to combat aggressive tendencies and be sure to keep the dog under control when other dogs are present. Teach this dog respect for humans by not allowing it to jump up and not allowing it to enter doorways first. The humans must make the dog heel beside or behind them when walking. It has given outstanding results as a guardian of property, but is at the same time esteemed as a companion dog. The objective in training this dog is to achieve pack leader status. It is a natural instinct for a dog to have an order in its pack. When we humans live with dogs, we become their pack. The entire pack cooperates under a single leader; lines are clearly defined and rules are set. You and all other humans MUST be higher up in the order than the dog. That is the only way your relationship can be a success. When properly trained and socialized, this is a very good dog and a great family companion. Unfortunately, some choose to promote the fighting instinct in the breed, giving it a bad name.

The American Pit Bull Terrier is both powerful and agile. Actual weight and height are less important than the correct proportion of weight to height.

A generally healthy breed, although some are prone to hip dysplasia, hereditary cataracts, allergies to grass and congenital heart disease.

Pits will do okay in an apartment if they are sufficiently exercised. They are very active indoors and will do alright without a yard provided they get enough exercise. Prefers warm climates.

American Pit Bull Terriers must have plenty of regular exercise and need to be taken on long daily walks.

The smooth, shorthaired coat is easy to groom. Brush regularly with a firm bristle brush, and bathe or dry shampoo as necessary. A rub with a piece of toweling or chamois will make the coat gleam. This breed is an average shedder.

Developed from the Bull and Terrier types dogs, the American Pit Bull Terrier can be traced back to the early 1800s in what is now known as the United Kingdom. They were bred as an all-around farm dog, working the farms as a cattle/hog dog. Some chose to turn their talents into the sport of pit-fighting. The breed's tenacity and accompanying strength are unmatched in the canine world. As rich and captivating as the breed's history is, the Pit Bull's future is more worthy of commentary. Some proponents of the breed argue that this breed is the original bulldog of the past. Old prints and woodcarvings show reason to believe this. They show dogs that look exactly like the breed today, doing things the dog is still capable of doing. For more information on this theory you can read books by Richard F. Stratton. The APBT, as registered by the UKC, is an individual breed of dog and does not refer to just any ill-bred, mindless warrior-type mongrel. At one time, the Pit Bull had an all around reputation of a much loved, trustworthy companion. Unfortunately the breed has become a status symbol for many types of criminals who chose to train these dogs to fight. It is those types of people who are chiefly responsible for the banning and witch-hunting that has been sweeping the U.S. The media, however, should not go unmentioned, for it is also responsible for escalating isolated incidences in a relentless and attention-getting way. Most Pit Bulls are bred as family dogs or sports such as weight pulling, but the media will rarely mention this. They get more views pretending all Pit Bulls are bred by fighters. In a lot of cases when the media is reporting about a Pit Bull attacking, it is indeed not even a Pit Bull at all, but a mixed breed of some sort, or another bull breed all together. For example, there was a report on KYW news in Philadelphia about two Pit Bulls attacking a person. The dogs did not look like Pit Bulls, but rather Boxer mixes. The news station was called and asked if they knew the dogs were in fact purebred American Pit Bull Terriers, or another bull breed of some sort, or mutts, for that matter. They stated they did not know, and to call the police station to verify that information. They were asked how they could report something that they were not sure of. They had no answer and they were not sure of the dogs’ breeds. Even after admitting on the phone that they did not in fact know the breeds of the dogs in question, they kept calling the dogs Pit Bulls in their reports. Why? Because the name Pit Bull will draw out the most attention from the public. The Pit Bull's future has been perhaps irreparably undone and everyone is to blame except the dog itself. This very loyal dog is too set on pleasing his owner, and ironically this is the root of his own undoing. Accompanying this need to please are remarkable abilities of all kinds. Jack Dempsy, Teddy Roosevelt and Jack Johnson are just a few people who have owned Pit Bulls. Pit Bulls excel in practically every canine task including herding, guarding, hunting, policing, cart pulling and ratting. A Pit Bull named Banddog Dread holds more canine working titles than ANY other breed. The owner's name is Diane Jessup and you can reference her book "The Working Pit Bull." It tells all of Dread's accomplishments. These dogs are truly capable of many tasks. The difference between Pits and American Staffordshire Terriers is a difficult one. Even breeders can't agree. The main difference is the bloodline. Amstaffs are show dogs and dog fighters usually do not use dogs with Amstaff blood. As time progresses there will be more of a difference. Many are dual registered as Amstaffs with the AKC and Pits with the UKC. 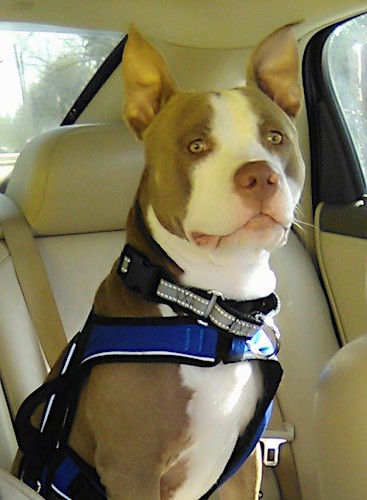 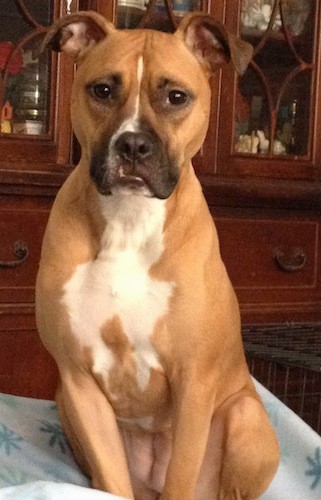 "Yaya is a 5-year-old APBT my wife and I rescued from the Humane Society in Erie, PA. She is great with other dogs and especially a real lover when it comes to people. She is very loyal and loves to smother us with Pitbull kisses. Having gone through a tragic loss in the family a couple of years ago, she has been the best 'therapist' one could ask for. She can be stubborn sometimes; that trait she gets from my wife!" 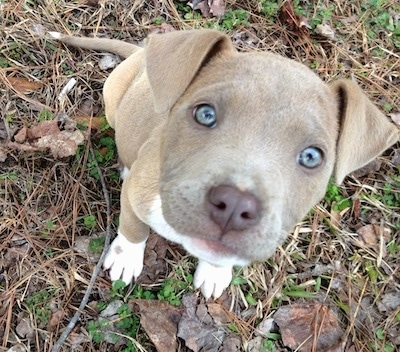 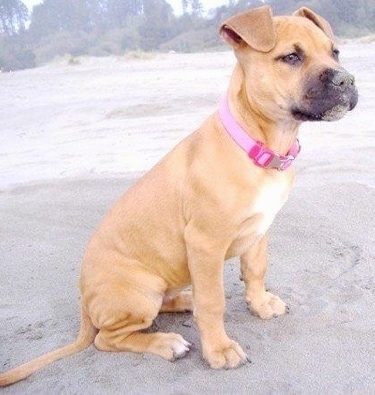 "This here is my baby girl Roxy at 2 and a half months old. She is the first Pit I've owned and I must say...I'll never own another breed of dog BUT Pitbulls! I fell in love with the breed 3 years ago when I went on vacation to California (I live in Washington) and I went to a Pitbull rescue... immediately I was surrounded by 15-20 Pitbulls. I've never had so many dogs at once DYING for my attention!!! I knew from that day on there was no other dog I wanted BUT a Pitbull. No one will ever understand a Pitbull unless they own one. The only thing they want in this world, what they live for, is to please you. Make you laugh and just be your companion. There's no such thing as a bad dog... just a bad owner. It frustrates me to hear all these stories about Pitbulls attacking little kids or biting their owners; most of those dogs that you see on the news AREN'T EVEN PITBULLS!!! They are all mostly mutts. How dare someone claim what a Pitbull is when most of those people have never even seen a Pitbull in person. No one believes me when I say Roxy is a purebred because "she's too small to be a purebred Pitbull" when in reality, purebred Pitbull Terriers ARE medium sized dogs—Roxy is 47 pounds now and pure muscle! She's got what I like to call "the Pitbull wiggle" when she gets so excited her whole body wiggles and she "smiles" at me. (I could really go on forever about Roxy!) She warms my heart and I want to cry sometimes just looking at her, and how happy she makes me. They are determined dogs, and have so much passion and fire in their eyes (just like her mamma!). I don't know what I would do without my baby girl!!!"