The Truth behind the Pit Bull Terrier 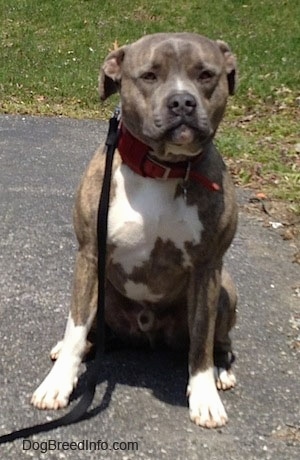 One thing nobody can argue with is the Pit Bull Terrier has a bad reputation. When someone says the name “Pit Bull,” most people either think of a vicious dog or are aware that others think of them that way. There is no other breed that stirs up so much emotion. They are idolized, feared, respected, hated and loved intensely by different types of people. There are groups that have been successful at banning them. Some insurance companies will not insure you if you own one, apartments will not let you live there if you own one and some areas will confiscate and kill a dog if they think it even remotely looks like one.

Ask people why or do a web search on the subject and you will get all kinds of answers. The answers will depend on whom you ask. The argument goes back and forth between the Pit Bull lovers and the haters. You see it on the web and in the news, those who say the dogs are dangerous and those who say they are people-lovers.

There is something I rarely hear and it is the reason behind all of this breed hype. When I bring the argument up to the Pit Bull haters no one can deny it, yet the subject is scooted around. People who are convinced the breed is dangerous never want to talk about it or consider it. If we could flip a switch and every Pit Bull Terrier would disappear off the face of the earth the breed scare would soon be replaced with a different type of dog that would get the same bad reputation. Fact is, the reason the breed has such a bad reputation is the percentage of people that idolize the breed are a certain type of person; the Pit Bull Terrier has become the breed of choice by certain types of criminals. If there were suddenly no more Pit Bulls these people would find another breed of dog to take its place. The Rottweiler and the Doberman Pinscher have gotten lucky and have been replaced by the Pit Bull.

Pit Bulls have become status symbols by many criminals and it appears to be politically incorrect to admit that it is not the breed of dog, but the type of people who own the dog, who affect that dog’s temperament. Study up on natural dog behavior and you will find that a dog's temperament is a direct result of his owner’s ability to understand him and give him what he instinctually needs as a canine animal. From drug dealers to dog fighters, the Pit Bull Terrier is a victim of criminals who mistreat it starting at a young age. They grab the puppies by the scruff of the neck and roughly face them up with other puppies. They teach them and encourage them to bark, growl, protect and attack. This type of dog owner rarely gets their dog neutered and they keep the dog chained, as they want the dog to be aggressive. According to the American Humane Association approximately 92% of fatal dog attacks involved male dogs, 94% of which were not neutered. Approximately 25% of fatal dog attacks involved chained dogs.

The people fighting the Pit Bull are looking for dogs with dog aggression. NOT human aggression. When a dog fighter has a "good" fighting dog, the dog's aggression is toward other dogs, not humans. Dog fighters must be able to step into the ring and pull their dog off without their dog turning around and attacking them. They must be able to have their dog in a room full of betting bystanders without the dog attacking the humans. It is a myth that Pit Bulls are bred to attack people. The thugs train them to fight other dogs, not humans.

However, despite what the media wants you to believe, it is only a very small percentage of Pit Bulls that are being used as dog fighters. Most of the dogs these people try and fight have to be tossed away as bait because they just can't fight like the humans want. Most Pit Bulls are owned by normal pet owners.

The media will do anything to sell a story and they use the Pit Bull for ratings. Here are just a few examples. I was once reading an article about a Border Collie who killed a child, yet the pictures in the article were all pictures of vicious Pit Bulls. In another story, a pack of four dogs hunted down and killed a human. The news only showed pictures of one of the four dogs. The one they showed was, you guessed it, a Pit Bull. They never showed the other dogs in the pack, which were clearly not Pit Bulls. Another time I was watching the news and there was a story of a Bull Terrier that had bitten a person. The media called the dog a Pit Bull. Bull Terriers are an AKC-recognized breed and are clearly NOT Pit Bulls. There was a story of a Pomeranian killing a 6-week-old baby; however, that story did not get as much media coverage because the dog was not a Pit Bull. The media's attempt to create a panic over a dog breed is sadly working. I was reading a story of a Jack Russell Terrier that had jumped into a newborn baby's cradle and killed it. All of the comments below the article were of how bad Pit Bulls were. The Jack Russell got a pass.

When a dog whose breed has been labeled "dangerous" bites a human, the dog is always named by breed. When another type of dog bites, it is often simply called a "dog," regardless of the severity of the bite. It seems humans need something to have a frenzy over and right now it's the "Pit Bull."

Most dog bites do not come from Pit Bulls, but rather small and medium sized dogs. A large percentage of bites go unreported because the bite did not require medical attention. Pit Bulls are strong and when they bite, like all large-breed dogs, the bite is bigger, causing more damage. If we were to only look at dog attacks coming from non-criminal owners, the percentage of Pit Bull attacks drops dramatically to where it would be less of an issue than Labrador Retriever attacks.

Take away the Pit Bull and you will not eliminate the problem. Pit Bulls are victims of criminals who use them as status symbols. They are their current dog of choice. Blaming the breed is like blaming the food on the end of the spoon instead of the hand feeding the mouth.

"The rap against “pit bulls” is full of holes. So let’s clear the air. As an expert witness for the courts for more than 20 years (qualified now in five states and the District of Columbia), I oppose breed-specific legislation. It even happens to be illegal in my state, Virginia. When attorneys for the injured person say they believe they have a "pit bull" case for me to consider, I tell them they are better off addressing "aggressive dog" legislation instead. Here are my reasons: 1. When dog bites are reported, the dog breed is frequently “guesstimated” by the person in authority – whether police officer or animal control officer. Even veterinarians often make their best guess at the actual breed involved. 2. The label, “pit bull” is often used to describe what could be any one of a number of what are called “bully” breeds. The term has nothing to do with temperament: It was intended to refer to all dog breeds that resemble “bulldogs” in some way and the term relates to the original purpose for which this breed was created. Even great Danes are included based on their brachycephalic (flat or “pushed in”) facial structure. So are Rottweilers. And then there are the mixed breeds that include one or more of the bully breeds. 3. Therefore, one or more of the following breeds could be involved when dog-bite cases are reported:a) Those breeds that contain the word “bulldog” in their breed names, b) several that contain “mastiff” in their names, and c) a number that include the word “terrier,” “boxer,” “Dane,” Pug,” and “Rottweiler.” In all, the list totals close to 50 separate and distinct breeds. 4. My son has raised two very sweet American Staffordshire Terriers (as classified by the AKC) and which the UKC calls the "American Pit Bull Terrier." His dogs had outgoing, stable dispositions that were friendly and trustworthy, and especially good with children. 5. While some un-socialized dogs called "pit bulls" may tend to be dog aggressive this rarely happens with properly socialized members of the breed. Indeed, such aggression can commonly be attributed to mixed breeds or owner-responsibility failures. In every case to date, the attorney involved has agreed with my logic before going forward."—© 2012, Stephen C. Rafe. All Rights Reserved. —Posted with Permission