The Pomeranian is a small, toy-sized dog. The head is wedge-shaped and in proportion with the body. The short muzzle is straight and fine. The stop is well pronounced. The color of the nose varies with coat color. The teeth meet in a scissors bite. The almond-shaped eyes are dark and medium in size. The small, erect ears are set high. The feathered tail lies straight and flat over the back. Dewclaws are sometimes removed. The Pom has a thick, double coat. The outer coat is long, straight and harsh in texture, while the undercoat is soft, thick and short. The coat is longer around the neck and chest area. Comes in a variety of coat colors and patterns including red, orange, white, cream, blue, brown, black, black and tan, wolf sable, orange sable, brindle and parti-color, which is white with colored markings.

The Pomeranian is a proud, lively little dog. It is intelligent, eager to learn, very loyal to its handler and family. The Pom is a wonderful companion and show dog. The breed's docile temper and affectionate nature endear it to many. It is alert, inquisitive and active: one of the most independent of the toy breeds, it needs a firm, gentle hand. Its liveliness and spirit make it well-liked by persons who do not usually care for toy dogs. Pomeranians may be picky eaters. If they are properly introduced they usually get along with other dogs and household animals without any problems. Poms make good little watchdogs. Teach this dog early that it may bark a couple of times when the doorbell rings or when there are visitors, but then to keep quiet. Be very consistent about this. Poms have a delightful nature and do not cling to their handlers. This happy pup is good at learning tricks. Pomeranians need to see their owners as boss or they will become very demanding. If you allow your dog to tell YOU when and where to do things than you have a potential problem on your hands and you may not even realize it. It is not cute or smart, it's dominance and will lead to bigger problems in the future if it has not already. Because of this breeds tiny size and its adorable Ewok-looking face, there are a very high percentage of Poms that fall victim to Small Dog Syndrome, human induced behaviors where the dog believes he is pack leader to humans. This can cause many varying degrees of behavior problems, which are NOT Pomeranian traits, but behaviors brought on by the way they are treated by the humans around them. Behaviors include, but are not limited to separation anxiety, becoming willful, nervous, bold and sometimes temperamental, not hesitating to attack much bigger dogs. Guarding behaviors and excessive barking as they try and tell THEIR humans what THEY want them to do. They can become reserved with strangers, barking at them excessively, and sometimes growling, snapping and biting. Because most humans treat this tiny canine in such a manner that the dog does not see them as pack leader, they are not recommended for children. However, if a Pom is given rules to follow, limits as to what it is allowed to do, daily pack walks and a calm, self-assured pack leader who displays confident assertion towards the dog, this can be a well-rounded, mentally stable, trustworthy, wonderful family companion. Because of its size, it can make a good companion for an elderly person.

In the 1800s Pomeranians could weigh up to 30 pounds. The larger Poms that appear today are often called “throwback” Pomeranians.

Pomeranians are prone to dislocated patella (kneecap), slipped stifle, heart problems, eye infections, skin irritations and tooth decay and early loss. It is recommended that they are fed dry dog food or crunchy Milk Bones daily to help keep the teeth and gums in good condition. Newborn Pom puppies are very tiny and fragile. Three newborns can be held in the palm of one’s hand. Dams on the smaller side often need to deliver by cesarean section. When the dog is old it may become molted with bald spots.

The Pomeranian is good for apartment living. These dogs are very active indoors and will do okay without a yard. Be careful they do not overheat in hot weather.

Poms need a daily walk. Play will take care of a lot of their exercise needs, however, as with all breeds, play will not fulfill their primal instinct to walk. Dogs that do not get to go on daily walks are more likely to display behavior problems. They will also enjoy a good romp in a safe, open area off lead, such as a large, fenced-in yard.

The Pomeranian's very long, double coat should be brushed frequently. If you work from the head, parting the coat and brushing it forward, it will fall neatly back in place, so the task, although time-consuming, is relatively easy. The cottony undercoat is shed once or twice a year. Dry shampoo when necessary. Clean the eyes and ears daily and take the dog for regular dental checkups. The Pomeranian is a constant shedder.

The Pomeranian got its name from the region of Pomerania, which is now the area of Germany and Poland, where it was developed from the ancient Spitz breeds. The original Pomeranians were much larger, weighing up to 30 pounds, and worked as sheep herders. Marie Antoinette, Emile Zola, Mozart and Queen Victoria all owned Pomeranians. In 1870 the Kennel Club in England first recognized them as a breed. In 1888 Queen Victoria began breeding and showing the dogs. It was she who started breeding them down in size, making the breed very popular in England. The Pomeranian was first recognized by the AKC in 1888. Some of the Pom's talents include: watchdog, agility and performing tricks. Poms make superior circus performers. 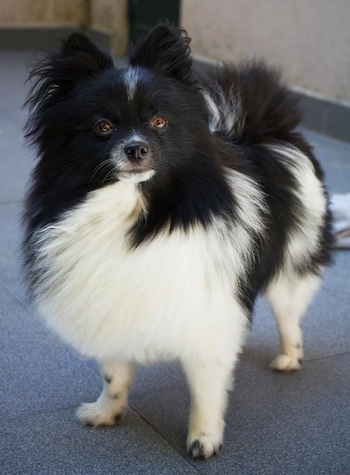 Guri the black and white parti-color Pomeranian at 3 years old—"Guri is very intelligent and caring. He can't stop kissing the ones he loves. He is friendly to other dogs and has a lot of energy. The thing he loves the most is his little ball. He is always the center of attention and he obviously doesn't mind it." 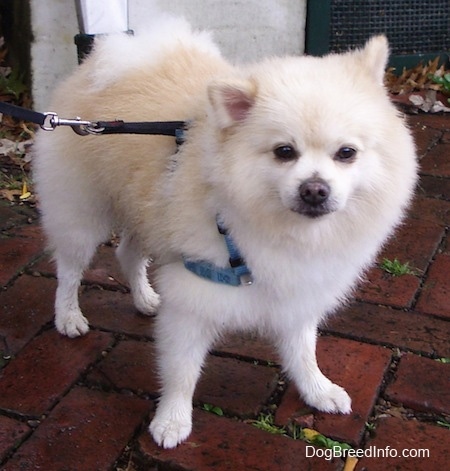 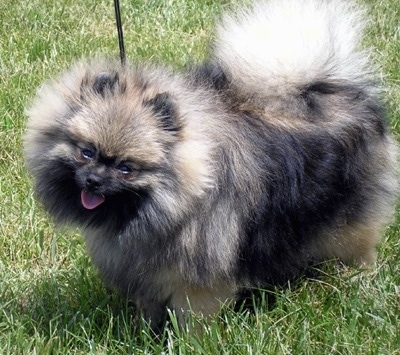 "This is Tchoupie (pronounced Choppy), a wolf sable female Pom. She was about 9 months old when these photos were taken. Tchoupie is a show-quality Pom who has done well at several shows. We hope to finish her someday, but because the color is so unique only a few wolf sable Poms have become champions thus far." Photo courtesy of Russ and Debby Bergeron 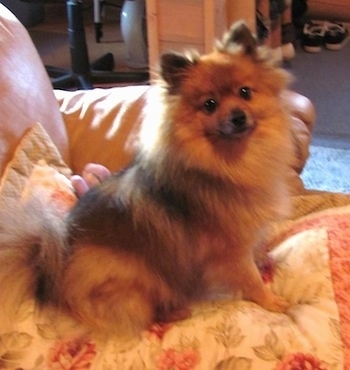 Tucker the Pomeranian— "THANK YOU for all this info. We are having fantastic results in just one day!" 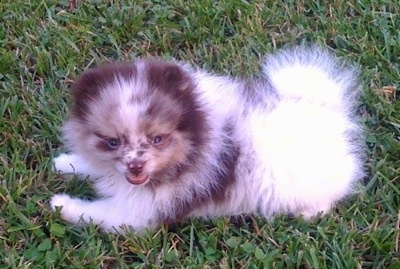 "Kujo the chocolate merle Pomeranian—I took in a rescue Pom and fell in love with him. After researching the breed for about a year I decided to find my own Pom. I found this beautiful little man and instantly fell in love. I kept watch of the site and started researching the breeder. After about a month of conversing with the breeder I knew that this little guy was perfect for me. He is 10 weeks in this picture and I absolutely love him. He is full of life, very playful, loving and very smart. Although he is not a yappy dog, he always sits before he barks, he has great manners. Another quirky habit he has is that he loves lying on the air vent when it comes on, he looks very Monroe-like with his fur blowing about." 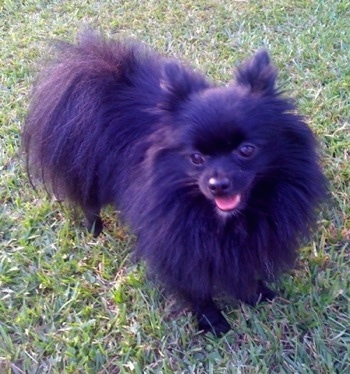 "This is Gizmo, Kujo's brother. He is a purebred black mismark Pomeranian. He is my rescue Pom and one of the reasons I fell in love with the breed. Shown here at 2 years old and weighing 5 lbs. He and Kujo are two peas in a pod." 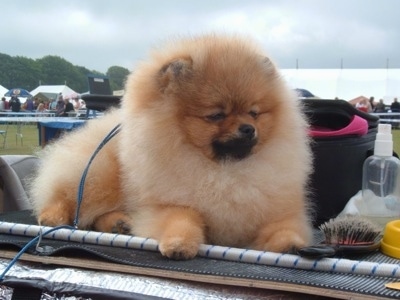 Pommania P Diddy is a beautiful example of the breed with a perfect head and correct size and coat. Photo courtesy of Pommania Pomeranians 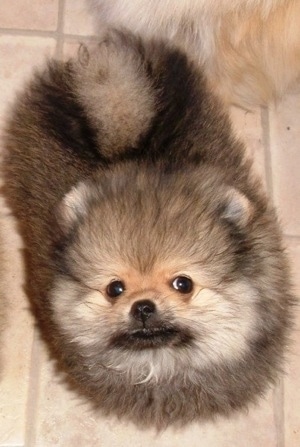 Pomm Pomeranania Little Star is an example of what a Pomeranian puppy that meets the show standards should look like. Photo courtesy of Pommania Pomeranians 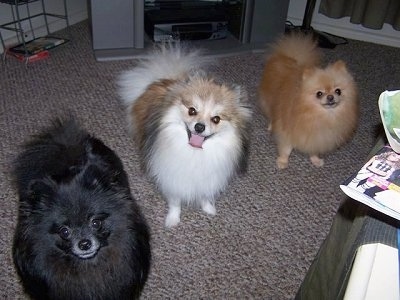 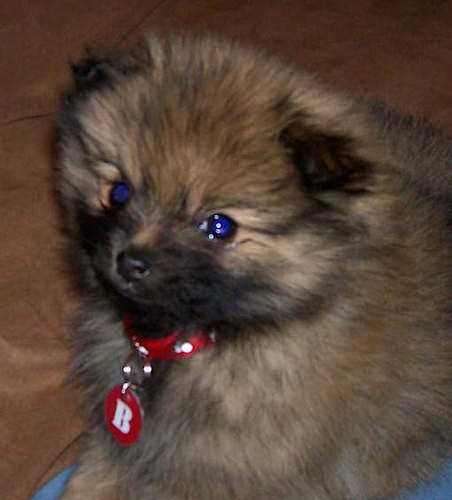 Beau the Pomeranian puppy at 7 weeks old—"We love him to bits he's extremely fun-loving and likes to play with everyone!"

See more examples of the Pomeranian