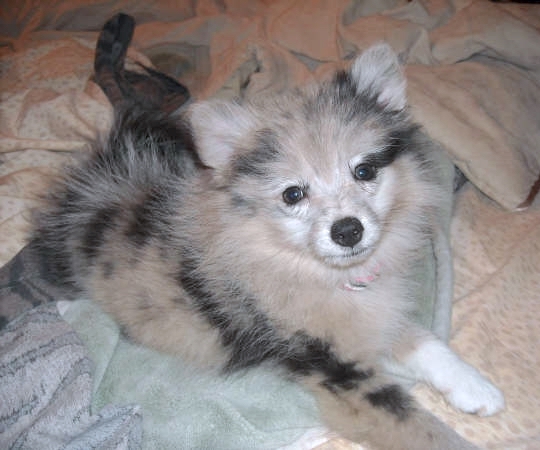 Mocha the blue merle Pomeranian puppy at 3 months old—"Mocha is a purebred Pom and is AKC registered. I took this picture after she settled down from a long day of playing. She just loves to pose for the camera. She is a very upbeat playful pup and loves to get as much attention as she can. She loves to play with my long hair Chihuahua/Silky Terrier mix. They play for hours at a time just chasing each other and sharing chew bones together. She has a fetish for shoes and by that I mean a fetish for chewing on them. I take her to the park on almost a daily basis and it is so adorable when she plays and chases the other dogs because instead of running after them she just pounces along." 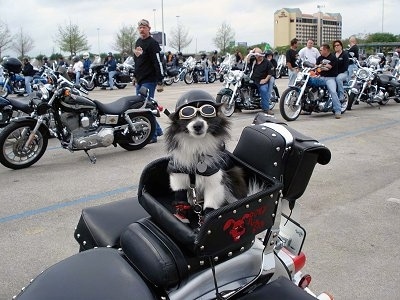 "Jake is a 1-year-old male exotic blue and white parti Pomeranian. I keep his hair cut short due to so much motorcycle riding it tends to tangle and look frayed. Jake is a wonderful, social dog. We use Jake on our Patriot Guard rides to welcome home soldiers who have been overseas and the families who have lost someone in the war. They always seem to remember Jake and his outgoing personality and friendly smile gives them something to remember. Jake is one of four we have. Jake is the leader of a small motorcycle club of dogs who do this type of therapy work called Killer Poms. And yes, they all have their own leather vests they wear while riding." 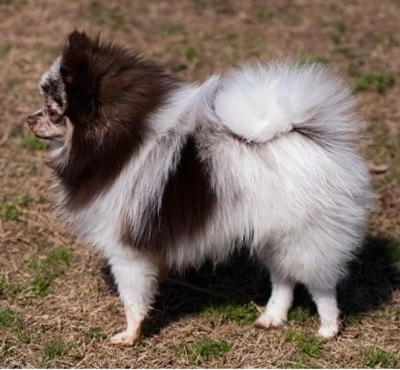 Kujo the chocolate merle parti Pom at 9 months old—"We are working on his "stack." He is a nice, light 5 pounds, but he is quite sure that he is at least 20 pounds heavier than whatever/whoever he is looking at." 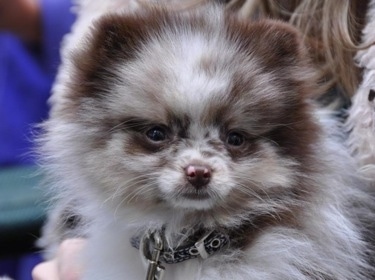 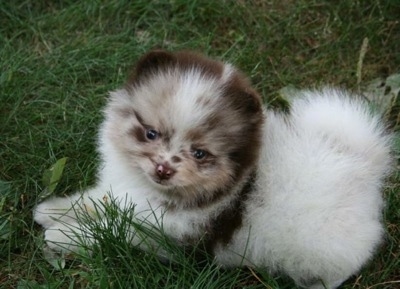 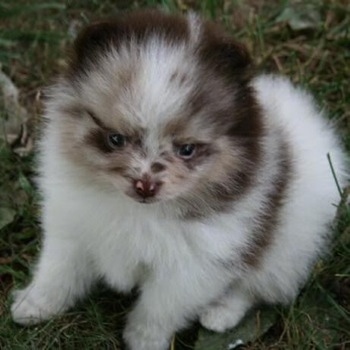 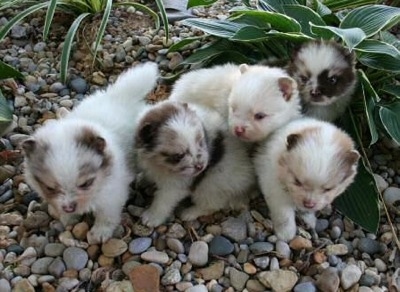 Kujo and his littermates at 4 weeks old 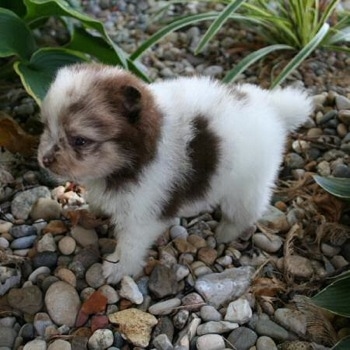 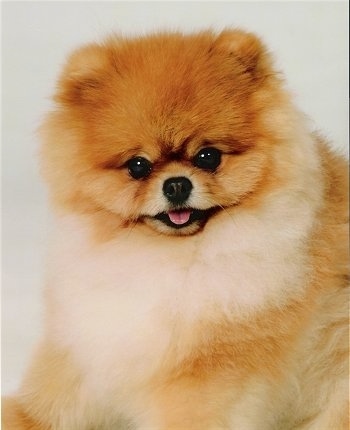 Bentley the adorable Pom at 2 years old with his coat cut (not shaved, just trimmed)—if you outright shave a Pom, the coat will most likely grow back very coarse and after time it may not grow back as fluffy.

"I have a beautiful Pomeranian dog whose name is Bentley. I take him everywhere with me and every time I bring him out with me a big crowd surrounds me to see him; they say he looks like a teddy bear and some people even think I’m carrying a kid’s stuffed animal because he sits so still in my arms and is so fluffy!! Bentley is an orange Pomeranian with a white chest and tail. He weighs about 4 lbs. and has an exceptional personality." 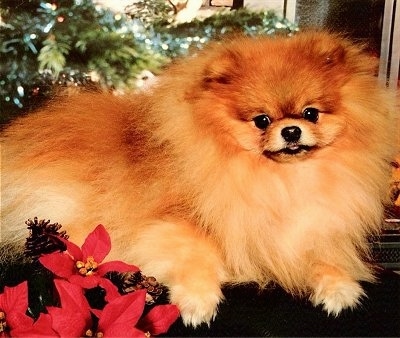 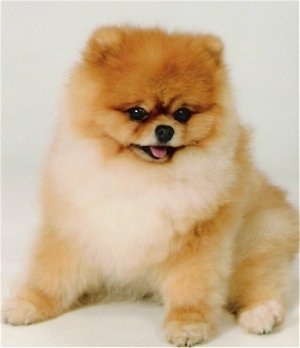 Bentley the adorable Pom at 2 years old with his coat cut (not shaved, just trimmed) 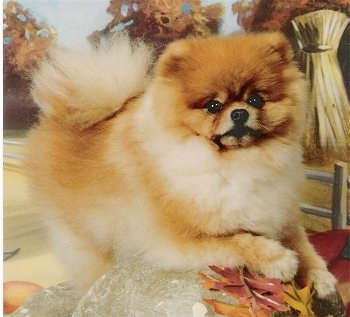 Bentley the Pomeranian at about 2 years old with his coat cut (not shaved, just trimmed) 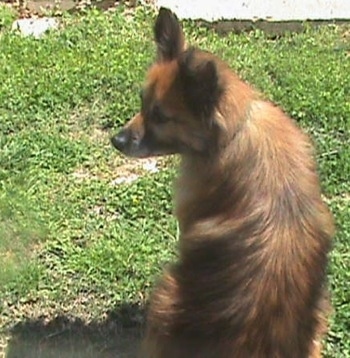 "This is Squirt. She is a 6½-year-old, full-sized purebred Pom, weighing close to 20 pounds. She has beautiful coloring. I haven't seen many like her. She loves to play fetch and "catch the neighbor’s anything." She loves to play with her "brother" Patrick (he is a yellow Border Collie). She is very sweet and she loves the kids." 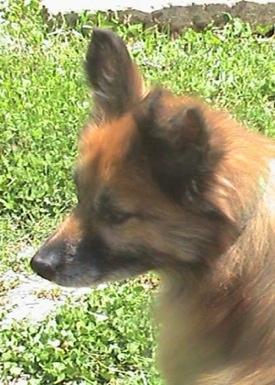 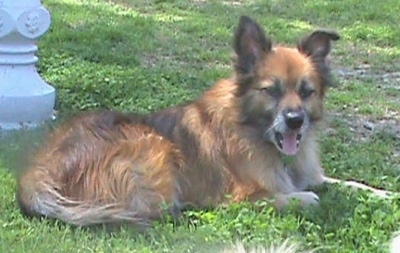 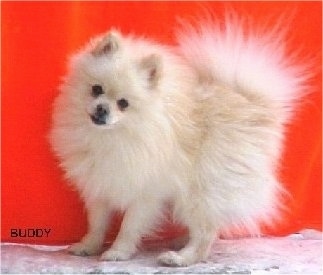 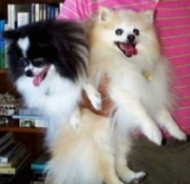 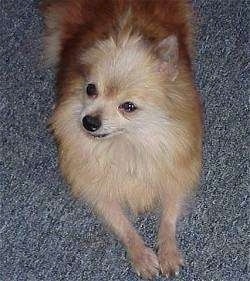 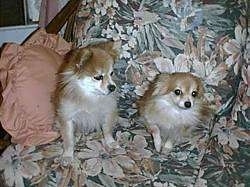 Sadie (left) and Flosie (right)—Flosie was Sadie’s mother. Flosie passed away on 2\20\00. She was 11 years old. She will be greatly missed. 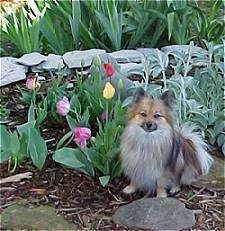 This is 21-month-old Prancer Fraze. He is a red sable Pomeranian, and mama's baby. 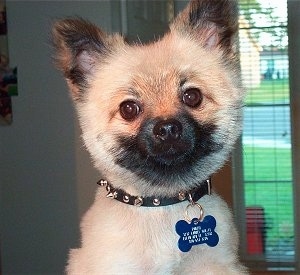 This is Fonzie, an 11-month-old male Pom. He has his hair cut because it gets so hot in Florida where he lives.