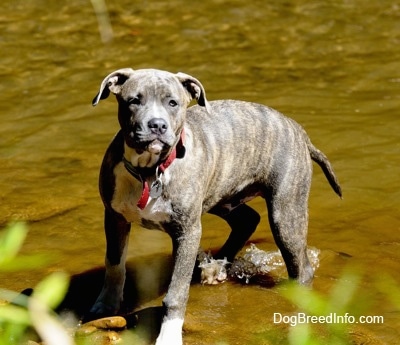 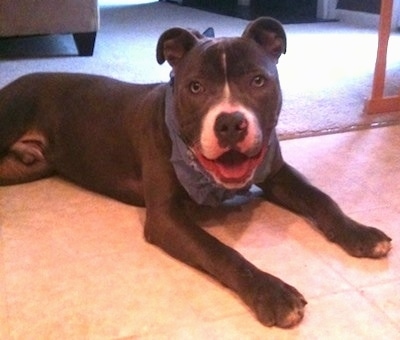 "Meet my son Meico. He is my one-year-old blue Pitbull that I've raised since he was 8 weeks old. Soooooo not the Yorkie I asked for. Totally against having a Pitbull, upon returning home one day from errands there he was, compliments of my husband. I almost died; stereotypes flooded my mind, not to mention our 5-year-old daughter’s safety. After 5 minutes with him he had my heart, and nothing’s changed. He's totally a mama's boy; anywhere I am he is. He's such a clown, his personality is HUGE, he loves children and being around people. He also loves to go for runs and wrestle with my husband. He has a softer side; we share cooking and cuddling time. He greets me with kisses every morning. He's amazingly smart and a jokester at times. I can't imagine my life without him and can't believe I almost let society’s reputation ruin what is one of the best things that has ever happened to me. I Love my Pitbull! "Punish the deed, not the breed"" 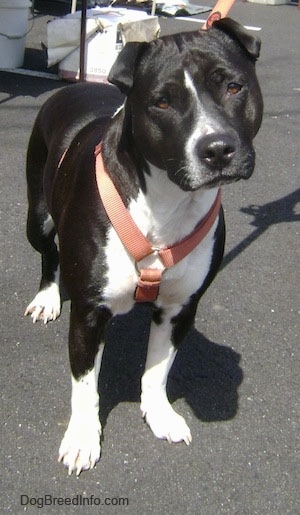 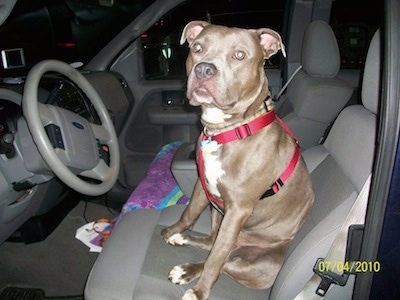 "This is my 2-year-old male American Pit Bull Terrier, Memphis. I sometimes think he was supposed to be female because whenever he is around a puppy he likes to play Mom. He likes to try and clean them and take care of them. I was a little nervous about getting a Pit Bull at first but it was what my girlfriend wanted so I went with it. And after 2 years I have to say he is the best dog I have ever met and I am very glad that we got him. He is extremely friendly and loves to wrestle but never gets too rough when we do wrestle. He also loves going to the beach. He gets along extremely well with other dogs no matter if they are big or small. He loves children and whenever one is around, he always wants to play with them. I used to be one of those people that didn't think a Pit Bull was a good dog to own, but after 2 years I stand corrected. There is nothing wrong with a Pit Bull and they are great dogs." 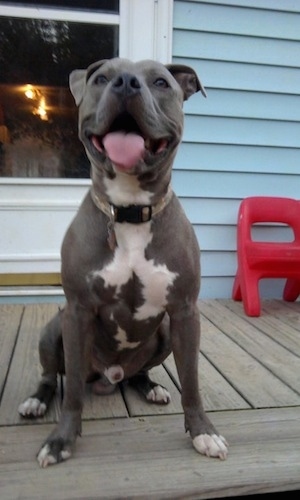 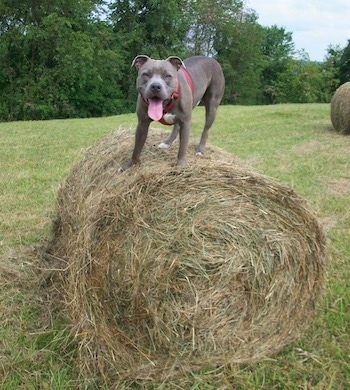 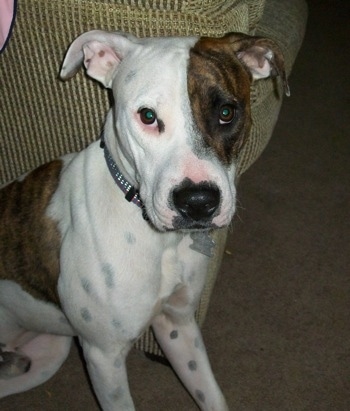 "This is my now 18-month-old male Pitbull, Patch Adams. I'm not real sure what his blood lines are because my husband and I rescued him, I guess you could say. I was outside walking my then 8-week-old Basset mix and he followed us into the house. Immediately my three children fell in love with him. We were not real sure where he came from so my husband walked outside and found the person who was at the time responsible for him. She told us how she really couldn't take care of him and we decided that he could live with us. He and my oldest son became inseparable." 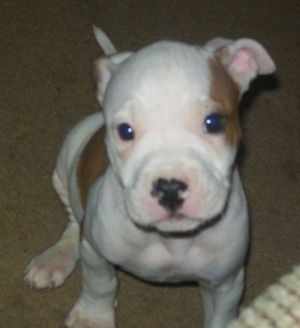 "We also have two other Pit Bulls. Both are females. The puppy is Princess Pea Body; she is the final puppy to be born in our first litter. She is 4 weeks in this picture." 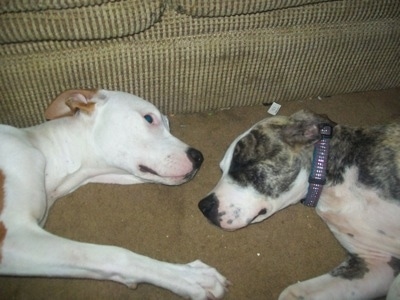 "I would like to introduce the world to Fat's Razor (right) who is sleeping with Princess Pea Body (left). This is my 7-year-old son’s new puppy. He is a rescue. We adopted him from a family who had been able to find homes for all but him and his brother. They could no longer take care of them and when we saw his picture online our hearts melted. Immediately we knew we had to have him. He is still a little shy and not sure about indoor living but is coming around. We are sure he will warm up to our other babies. In fact, here is a picture of his new mate and him sleeping." 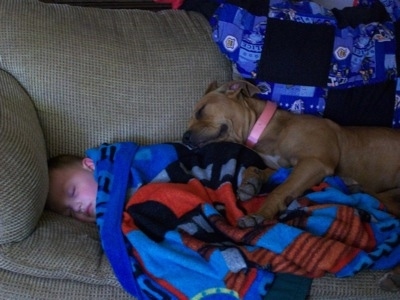 "The beautiful red sleeping next to her owner, yes her owner is only 4 in this picture, is Indicia Louise Waddelsworth. At this time she was 10 months old. All three of my Pitbulls are very child oriented. To be honest with you I was very intimidated the first time we owned a Pitbull, not real sure, but now I wouldn't own any other breed." 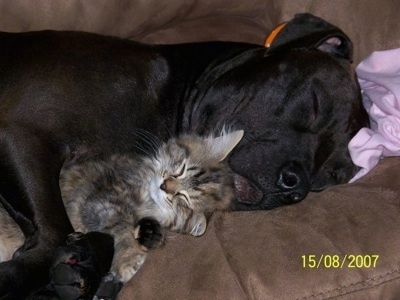 "This is a picture of our dog Shadow that I took with our kitten. He is a Pit Bull that we rescued outside of the Green Bay Humane Society two years ago. His previous owner was a college student that didn't have time for him and because he was difficult to place she was going to euthanize him. My daughter and I just happened to be looking around at the GBAS when they walked in the adoption door instead of the drop off door. I followed the gentleman outside as he was heading to the intake door and asked him why he was going to have this 6-month-old puppy put down. His only reason was because he couldn't find a home for him. I asked if we could take him, even if it was just to find him a home and he said yes. That's how Shadow came to be with us. Our entire family fell in love with him immediately and we knew he wasn't going anywhere. He is the best and most loving dog we have ever owned. Easiest to train and great with the children and other pets in our home. People still shudder when we mention that we own a Pit Bull with a Yorkie and a cat. Shadow is gentle with all animals, no matter how many stop by or are babysat. He has never shown any aggression. His best friends are my daughter’s teacup Maltese and our kitty Abbey. Shadow was a year and a half old when we brought Abbey home. Now they sleep and play together daily! No matter what animal we bring around, Shadow always welcomes them and has never once been territorial. I wish we could be spokespeople for his breed because I truly believe when raised right you will never have a more reliable or loyal pet. We love our dog!!" "I took this photo of my baby Pit Prince (8 weeks old). He was a lot to handle at first (I had never owned a pet before) but he's pretty easy to train. He's great company and loves to lie around and play." 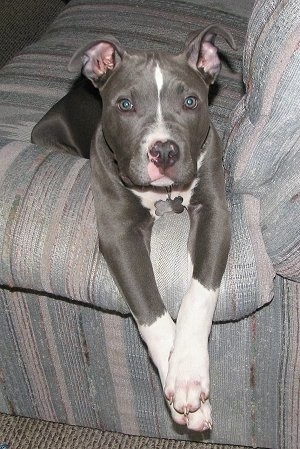 "Tyson the Pit Bull puppy at 12 weeks old has the best temperament ever! He gets along really well with other animals and kids. He rarely barks and loves everyone." 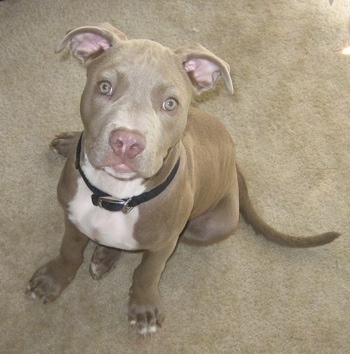 Koda the American Pit Bull Terrier puppy at 3 months old—"Koda did not come into my life by choice, I'll be honest. I was in college, I knew absolutely nothing about the breed or how to take care of a dog in general. He had a severe upper respiratory infection and looked terrible when I found him. My local SPCA location was not accepting any new drop-offs for three weeks due to inclement weather in the Gulf, and they were the only "no-kill" shelter I knew of. So it was me and a puppy for three weeks in a one-bedroom, third floor apartment. It was a terrible idea to say the least! He was destructive, stubborn and impossible to potty train because he could not see the grass from the apartment. But the three weeks passed, and I couldn't give him away, not because he was behaving well, but because I felt like I had him for a reason. So I stuck with him."

"I'll also be honest in saying he was the most difficult animal I could have come across. As he's aged, he has not lost the stubbornness by any means. Through serious one-on-one training, he has lost the destruction and has learned to respect me as his leader. Socialization has also been a huge hurdle to overcome as well, but we've managed to get to the point where he can be in a dog park without a problem, which seemed unthinkable mere months ago." 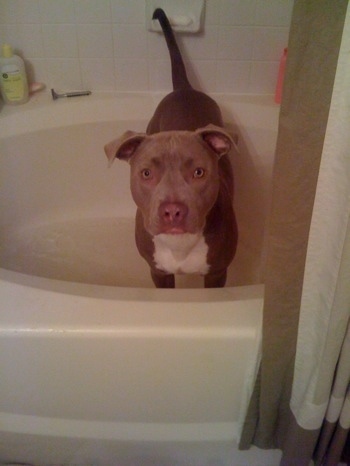 "Now, at 13 months and 70 pounds, he has made incredible strides from the sickly puppy I found. I have put more work into providing a great life for Koda than I ever thought I would for a dog. We've moved into a house with a yard and we spend more time at the dog park than I do on my homework. But he is my life now...he has given me a reason to get out of bed even when I'm sad or go run even when I'm tired, and I receive unconditional love from his little face every single day. He's a TON of work, but I cannot imagine having a different dog or ever owning a different breed." 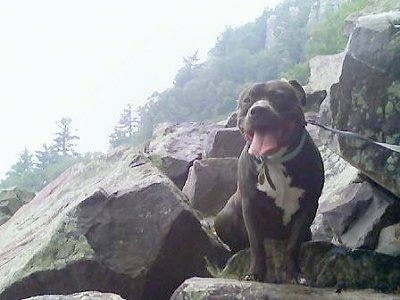 "This is my dog Jack. He is a purebred male American Pit Bull Terrier. He is a year old in this picture. His two favorite things in the entire world are going hiking and going to the beach. He loves to swim and play catch. He is the sweetest dog! Jack is an ambassador of his breed. He has changed many people's opinions on Pit Bulls and has been a blessing in our lives." 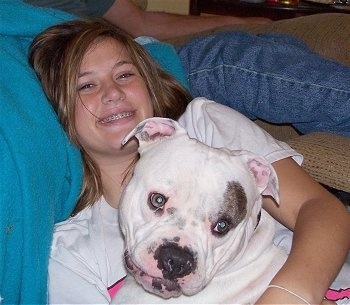 "This is my Pit Bull Rocco. He is 2 years old in this picture. He is mixed with jeep and Cherokee. He loves to run around outside and inside. Also loves to sleep in the bed with me and my husband. He doesn't like to be left alone. If he's left alone, he will tear up the garbage, but when we get home he tinkles on himself because he's so happy to see us!" "Rock, the American Pit Bull Terrier lying in the front yard at age 4 is a very sweet and calm Pit Bull. He loves to go running and walking with the family. He is very good with kids and loves my 4-year-old daughter. Rock is very mature. He also loves to go on different outings. For example: fishing, parks, visits to friends and family's house. He loves attention from the family and is a very protective companion. We have had him for a year now and he has fit perfectly into the family." "This is Laila, an American Pit Bull Terrier at 2 years old. She absolutely loves people and her Shepherd sister Asia who you can see in the background. Laila loves anything that squeaks, or maybe she hates it because she tends to kill the squeak pretty fast. She has TONS of energy and for some reason likes to lick everything. She is one of the best dogs that I have ever owned, and the only Pit Bull I have ever owned. Unfortunately the rest of my extended family still thinks she is "unpredictable and will attack any minute…." This is Laila checkin’ out your website! (And her Shepherd sister Asia in the background.)"