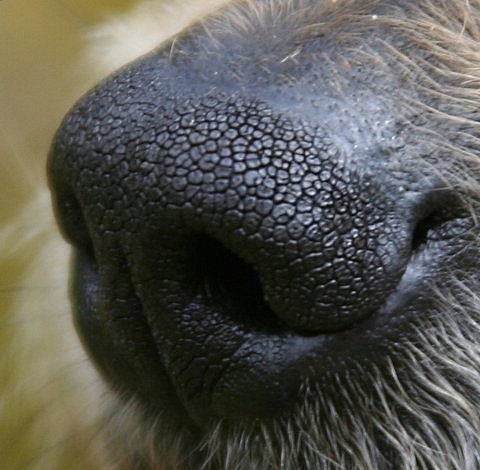 A big part of understanding your dog is understanding its senses and accepting that they are indeed different than humans. Both humans and dogs have the same three senses: sight, hearing and smelling, however while most humans communicate by hearing, seeing, and then smelling, dogs primarily communicate by smelling, seeing and lastly hearing. Dogs also have a universal sense which humans do not have, where they can feel the energy (emotions) of the other beings around them.

The statistics below will vary slightly with different types of breeds, for example a sight hound may have slightly better vision and a coonhound type of dog may have a slightly better sense of smell than other types.

Let’s take a look at each of a dog’s senses. 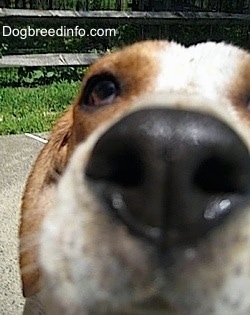 A dog interprets the world predominantly by smell, whereas a human interprets it by sight. As a human I cannot even imagine what that would be like to get most of my information from what I smell. This is why a blind or deaf dog can get along just fine if allowed to be a dog, given the proper leadership and exercise and their sensory whiskers are not cut off when they are groomed. While a dog's brain is only one-tenth the size of a human brain, the part that controls smell is 40 times larger than in humans. A dog’s sense of smell is about 1,000 to 10,000,000 times more sensitive than a human’s (depending on the breed). A human has about 5 million scent glands, compared to a dog, who has anywhere from 125 million to 300 million (depending on the breed). Ever wonder why your dog's nose is wet? The mucus on a dog's nose actually helps it smell by capturing scent particles. When a dog’s nose is dry they may lick it to aid them in scent. 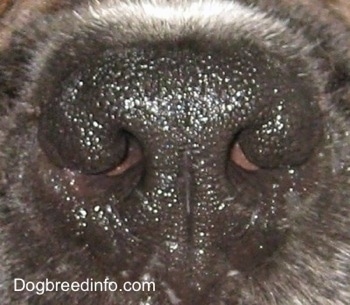 When dogs smell something they are not just registering a smell, they get an entire story. They can smell pheromone, which is not only found in the urine and fecal, but on the skin and fur. From this they can tell a lot about another dog or human including if they are male or female, what they ate, where they have been, what they have touched, if they are ready to mate, if they have recently given birth, or had a false pregnancy, and what mood they are in. 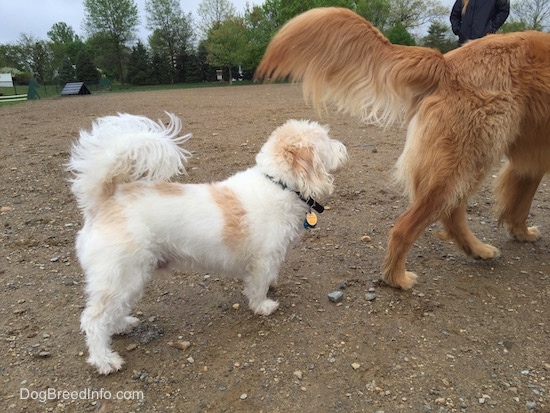 They have even been known to smell cancer on people, alerting them to it and saving their lives. This means when your dog smells another person, tree that another dog has peed on, pant leg that another dog has rubbed up against, or chair that someone has sat in, they are actually reading a story, not just smelling an interesting scent. While a human will smell something like spaghetti sauce as one smell, a dog smells each individual ingredient. Unlike humans, dogs can move their nostrils independently, allowing them to know what direction a smell is coming from.

A dog can both sniff and breathe. These are two different functions. Breathing is for air, but when they sniff with short breaths they actually save some scent that does not get exhaled. When a dog is overheated and actively panting, its sense of smell is reduced by as much as 40 percent as it uses the air to cool itself rather than for smelling.

Puppies have heat sensors in their noses to help find their mother during the time when their eyes and ears are closed. These sensors disappear by the time they are adults.

Since dogs do not have a spoken language, their thoughts are more like a sequence of images, much like a child before it learns to speak.

A common question among humans is, "Are dogs colorblind?" The answer is no, not exactly, meaning they do not only see in shades of only black and white. Studies have shown that dogs see in colors of various shades of blue and yellow. For example, a rainbow to a dog would be as follows: dark blue, light blue, light gray, light yellow, dark brownish yellow, and dark gray.

Purple and blue are both seen as shades of blue. Greenish-blue is viewed as a shade of gray. Red is seen as a black or dark gray. Orange, yellow and green all are seen to a dog as various shades of yellow. This means that, to a dog, bright orange toys are the same yellowish shade as the green grass. If you want your dog to clearly see his toys in the green grass you are better off giving the dog blue toys; if you have orange, yellow or green toys, the dog will be able to find them with his nose.

Dogs can see best at dusk and dawn. Their low-light vision is much better than a human’s, but their overall vision is not better. While a human’s vision is considered perfect at 20/20, a dog's vision is on average 20/75. Dogs cannot see as well at a distance as a human with normal eyes. Humans can also see things close up better than a dog can. On average, a human can see something clearly as close as 7 cm away, compared to a dog that sees things burry if they are closer than 33 cm away. Dogs can recognize objects better when they are moving and sometimes overlook the same object when it is still. Dogs see images on a TV screen, but most likely also see a rapidly flickering light, almost like a strobe light, in the picture; a human’s flicker resolution ability is about 55 Hz and a dog's is about 75 Hz. 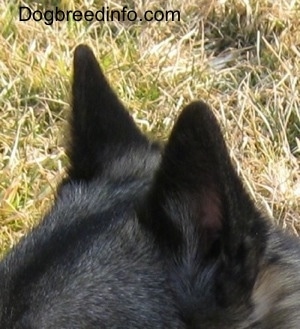 Puppies are born deaf and cannot hear until they are about 21 days old. Their eyes are also closed. During this time they rely solely on scent to interpret their world. By the time their sense of hearing is completely developed they can hear about 4 times the distance of a human who has normal hearing. Dogs can hear higher pitched sounds that humans cannot hear. They often bark at vacuums because they hear a very loud annoying pitch to their motors.

Dogs detect sounds in the frequency range of approximately 67 - 45,000 Hz (varies with different breeds), compared to humans with the approximate range of 64 - 23,000 Hz. As humans and dogs get older they both lose the ability to hear certain frequencies.

Dogs have 18 or more muscles in their ears allowing them to be mobile, whereas a human has only 6 and can only move their ears slightly, if at all. Dogs with perked ears can usually hear better than dogs with hanging ears, especially if they can move their ears in the direction of the sound. 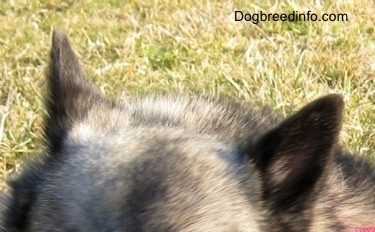 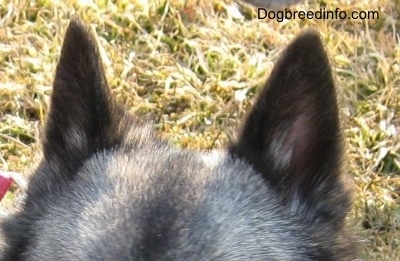 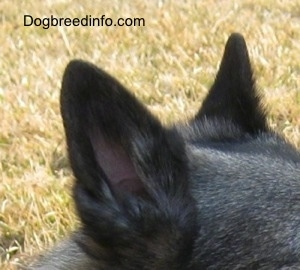 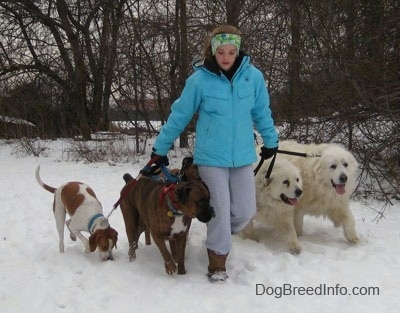 Animals can feel energy. If you break it down to simple science, the kinetic energy a dog detects might simply be a frequency. Light, sound and heat are all frequencies. This energy is a universal animal language. Have you ever been watching a group of wild animals out in the yard, perhaps a squirrel, rabbit and a deer all eating peacefully? Clearly these animals are not speaking words to one another asking if they all come in peace; somehow they all know that they are not going to harm one another. Or perhaps you know a dog that other dogs do not tend to like, or a cat that likes one dog but not another. Or perhaps you know of a person who dogs are prone to bark at. Dogs can sense fear. It is believe they can smell the pheromone and perhaps they can even feel it radiating from a being. Some dogs can tell a few minutes before a human is about to have a seizure even before the person knows. When I was a kid growing up I had a Lab mix who loved everyone. There was not a single person he didn't like, except for one family friend. When this person would come around he would bark at him. I later discovered that many dogs tended to bark at this person and as I got older I realized he was a very tense, nervous person.

Another example was a time when my husband and I were driving down the road with our two dogs in a van that did not have any windows in the back. The dogs were sleeping on the van floor. Suddenly our Pit Bull stood up and started growling. I was in the passenger seat and didn’t see or hear anything. My husband, on the other hand, was amazed. He had just passed a cop and for a split second thought he may have been speeding and at the exact moment he felt a chill of fear run down his spine, his dog had popped up from his curled up sleep and growled, not at us but toward the walls of the moving van. The dog had felt his fear and was jumping up in protection mode.

Dogs interpret human emotions such as worry, anxiety, fear, anger, pity and nervousness, as weaknesses and they do not listen to these emotions. Dogs listen best to someone who is calm but firm in their approach. They use their sense of energy to determine who should be the leader of their pack. The being with the strongest and most stable energy is the one they look to, be it themselves or another being around them. While you can hide your emotions from another human, you cannot hide them from a dog.