Teaching puppies and dogs to respect the kids 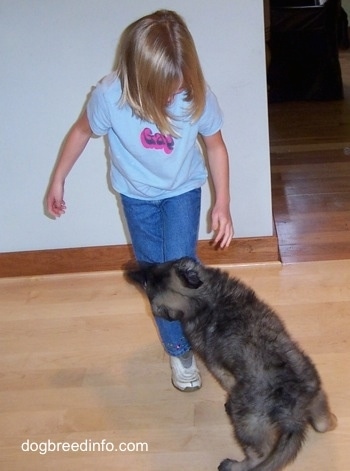 A friend of mine has an autistic child and wanted to get a dog for her son. Dogs can do wonders for special-needs children. They often bring them out of their shell and have even been known to encourage them to excel further in their daily progress.

In helping my friend with her puppy-raising, I noticed an issue beginning to develop—one that happens to a lot of people, even without special-needs children that most owners do not stop in the beginning signs of the problem, but rather wait until it is a full-blown issue.

The puppy was starting t chase and jump all over the kids whenever he saw them, treating them more like littermates than his leaders. The puppy was not respecting their space. The German Shepherd puppy would run after the autistic son as soon as he spotted him in the morning. The child did not even have a chance to come all the way down the steps after waking before the 8-week-old pup was chasing him in an excited manner. The pup was also behaving this way towards their older daughter.

Most see behaviors like this and interpret them as the puppy loving the child. They are best buddies just wanting to play, but actually when a dog respects a human or object they give it space. They do not come barreling over jumping on it. Rushing humans or objects is not respect, but quite the opposite.

This behavior can start off caused by the child's excitement. A high level of excitement is a weakness to a dog, and if all you show the puppy is excitement and play, and never show him leadership, the pup will start to see himself as above the kids in the pack order. This will become a problem as the puppy grows up into an adolescent and adult. If the puppy grows up to own the child in the house it can be very dangerous as the dog guards the child as their property. It may cause issues with your child's friends; they will not be safe in your house. For example: if your child is playing with their friend and they get hurt or start to play in a manner that your dog feels is too rough, the dog might decide to protect his "property" against the other child.

A dog should own NO property. Everything belongs to the humans; the children are not property the dog can own. This is where a lot of people go wrong, they do not see the warning signs and they do not act like leaders.

In cases such as this, the parents need to step in and "claim" the kids, communicating to the dog that he must respect them. They also need to teach their children how to be leaders. It does not matter if the dog is large, medium or toy-sized. The behaviors mean the same thing no matter what size the dog might be.

Dogs can have a lack of or lose respect with adults, and objects, not just with the children. This reminds me of Bruno and the motorcycle. I bought a dirt bike and when the first person started to ride it, Bruno the Boxer started barking at the tires. I had to "claim" my bike and stop him from chasing and barking at it. In this case my goal was to teach Bruno to follow the bike, but not obsess over it. 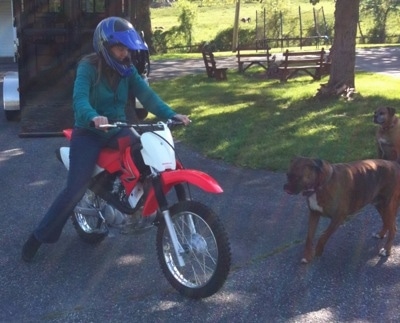 I had someone else ride the bike, and I stepped between Bruno and the path of the bike. If Bruno went left, I stepped left, if Bruno went right, I stepped right. You can "bite" the puppy or dog with your hand if you need to. Do not back away until the puppy or dog turns and gives up. After he gives up, if he looks confused as to what to do next, direct him. For example: if you are inside the home, lead him to his bed and tell him to lie down. Sometimes when you tell a dog not to do something, he is not sure what it is he should be doing, and you need to give him this direction.

Make sure you follow through in your corrections. Often, people only halfway correct the dog; they do not finish to the end. They tell the dog "no," but are not watching for signs of the dog giving up. The dog only stops for a short time and the humans think their job is done, when the dog never did give it up, it only paused for a bit. The process starts all over again until the humans deem the correction as useless, and the dog wins. The more you allow the dog to win, the stronger minded and more stubborn your dog will become. Just as important as following through, the correction needs to stop the second the desired result is achieved.

Stopping the behavior can sometimes take time, depending on the will of the dog. Some dogs will give it up after only one correction and some will hold out for 10 minutes or longer, trying to evade your blocks. You cannot give up. You have to follow through until the end. Do not stop until the dog has turned his attention away from the object it is focused on. You have to watch for signs of the dog giving up. If the dog turns but is still very alert and perky with perhaps wide eyes, standing tall and proud, your job is not done. The dog must submit to the person or object. Read more about signs of submission. As soon as the dog does submit, your correction should stop so the dog understands THAT is what you wanted. 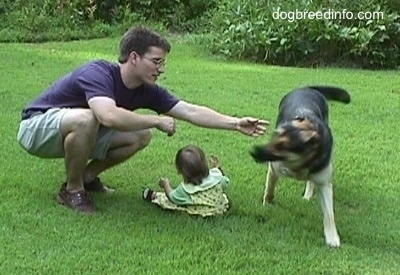 Your energy and demeanor are very important when claiming things from a dog. When correcting you must be calm, but very firm and confident. Use fewer words. A command or two are OK, but do not repeat yourself over and over again. Make it happen. For example: when the dog runs to the child or object step between them. You can say a word or use a sound if you think you need to get his attention but fewer words are better. Do not use the dog's name. The name should only be associated with something positive.

Picture the dog doing what you want him to do to help project this to the dog. If you are not convinced that the dog is going to listen to you, chances are the dog will not listen to you. Dogs can feel human emotions and they do not listen to those they see as weak minded. Think mamma or papa grizzly bear. Stand tall and proud and project this demeanor to your dog. You mean it, and you are stronger-minded than they are. Do not yell, scream or get excited in your corrections. Fewer words, more body language. 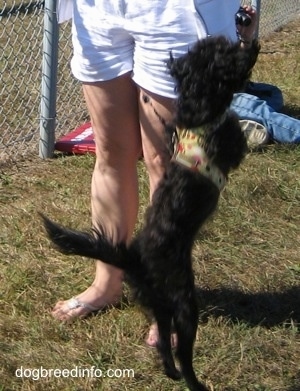 Timing your corrections is important. For example: if your issue is the dog running after your kids and jumping on them, try and see the behavior coming and stop it before the puppy makes a move toward the kids. That will make a big difference in teaching him what exactly you want or do not want him to do. Read more about Stopping a Jumping Dog.

You can put a long lightweight leash on the dog when you know the child will be entering the room. You can then use the leash to correct the dog with a tug if he tries to go after the child. Another method is to hold the pup up by the scruff the same way a mother dog would hold a pup. This calms the dog, yet corrects them at the same time. It may take time to calm them if they are really excited, and you must wait it out. You may have to use your other hand to support their bottom depending on the size and weight of the dog.

Dogs have to learn not to chase and jump on the kids. You own the kids and you rule the house. You have to put the kids above the dog. If the children are old enough and capable, teach them how to communicate and correct the dog. They should be told not to play with the puppy or dog until this behavior is corrected and the dog no longer runs and jumps on them. There should be no affection from the human to the dog, only leadership, until this issue is corrected.

Depending on the child, they can even stand their ground and block the dog themselves, sending the dog away from them. A child who turns and runs is asking for the dog to chase. The parents, as alpha pack members, need to reinforce the correction of the puppy or dog and guide the children in their reactions. If the child is incapable of correcting the dog, the adult needs to step in 100% and tell the dog to leave the child alone. The dog needs to respect the child and space is respect. Allowing a puppy or dog to run and jump on a family member is only asking for even bigger problems in the future.

My friend says, "When the puppy goes for them they back up. I try to explain to my daughter to go forward, not back; show him who is boss. But she is scared. My autistic son just doesn't understand so he runs up on the sofa. I will continue to be the guard and enforcer for them. The puppy will learn if it's the last thing I do. And I am very calm about it. My keyword is "OFF." 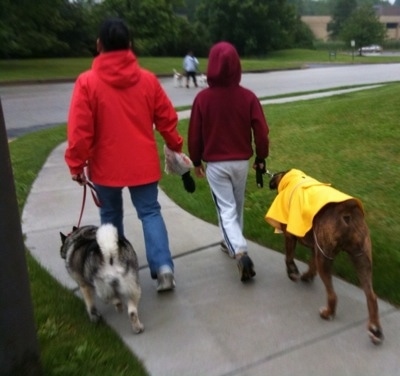 Going for family pack walks can greatly help this situation. The dog should be heeling on the leash and entering and exiting entrance ways after the humans. Please read The Proper Way to Walk a Dog  for more details. The way, and how often, you walk your dog is a very important aspect of your human to dog relationship.

When going on family pack walks have the children or other human who the dog likes to jump on or run after walk in front of the dog. Better yet, if it is possible, have them hold the leash, making the dog heel for them. If you see the dog trying to walk in front of the child or trying to rush ahead through doorways, gateways, stairs, etc., you have to stop it. Step between them and block the dog if the person the dog is focusing on is unable to do it themselves.

This leadership should start the day you bring your puppy home, but it is never too late to teach a dog of any age to respect. Learning dog behavior, paying attention for signs of disrespect, and providing leadership and exercise are the key points in raising and owning a happy, respectful, obedient, healthy-minded pet. Your dog cannot be balanced if any of these key points are missing in your relationship.