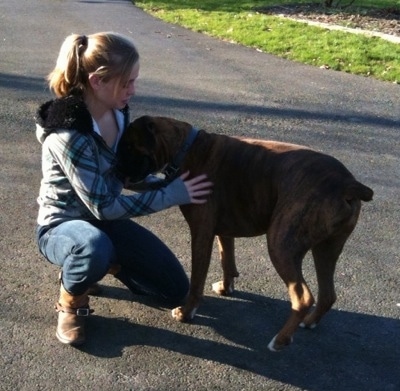 One of the biggest mistakes people make when it comes to dealing with dogs is confusing a submissive dog with an upset, depressed dog. 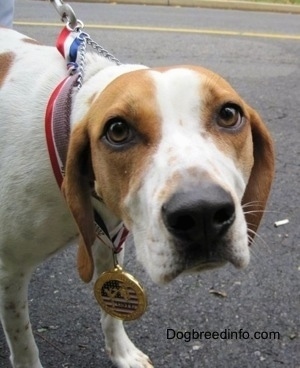 Dogs act and think very differently than humans. When a dog starts respecting a pack leader it not only calms down but it gives space to the leader and avoids eye contact because that is a challenge in the dog world. It will lower its head and tail and slink its body down smaller. While for a human that may indicate that they were upset, in the dog world it does not mean that at all. It simply means the dog is telling you it accepts you as its leader. If you can consistently stay your dog's pack leader your dog will become more secure and happy, not having to worry about taking care of all the humans around it. Keep in mind that a happy, secure, submissive dog is one that is calm and lowers itself, not one that is jumping around like a mad pup. 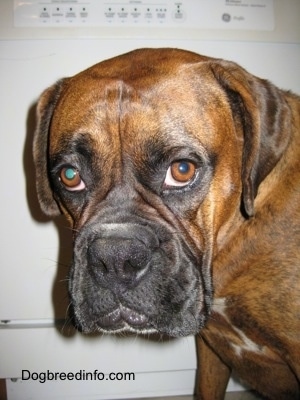 Confusing a dog's respect with it being upset can actually cause many problems. When you feel bad for the dog you will be sending it mixed signals. Your dog wants to feel that you are strong enough to care for him, and when he feels that, he will begin to treat you like an alpha dog—that means not jumping all over you and watching you for direction instead of worrying about GIVING YOU direction. 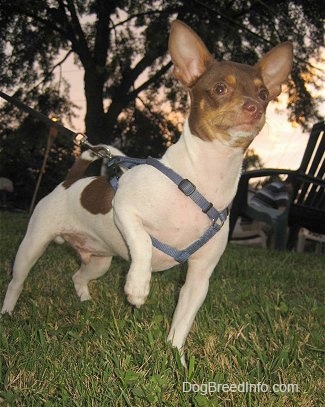 Dogs that believe they are alpha puff themselves out, and carry their heads as high as they possibly can to try and make themselves bigger. For more information, read Recognizing Dominant Behaviors in Dogs.

You hear stories about dogs who only like one person, not liking others, protecting that one person, etc.: that is how we humans interpret it. What is really happening is the dog owns the human and protects them out of possession, not out of love. “This human is mine, stay away from them.” Humans often confuse this with love. You want your dog to respect YOU as the leader, not OWN you as its possession.

A submissive gesture from the dog to the baby: The 10-month-old baby crawls over to the door to see Darley the Beagle mix saying "dog" for the first time. When the baby gets to the door he pulls himself up and looks at the dog. Notice how Darley avoids direct eye contact with the baby. This is a submissive gesture on the dog's part. Darley is telling the baby she does not wish to challenge him in any way. 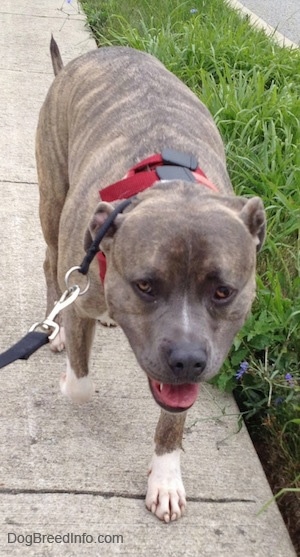 Spencer the Pit Bull has the body posture of a content, submissive dog. The head is held low, sometimes to the point where it is level with the back. The tail is low, relaxed and not tucked. The years are back. The mouth is slightly open and the body is relaxed. You can see the softness in his eyes. This dog means no harm to anyone or anything. He comes in peace and he is happy about it. 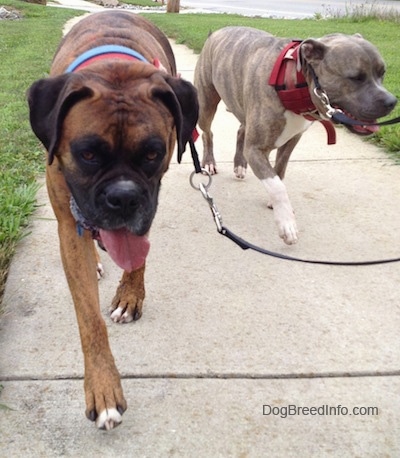 Bruno the Boxer and Spencer the Pit Bull demonstrate what a happy, submissive dog looks like. 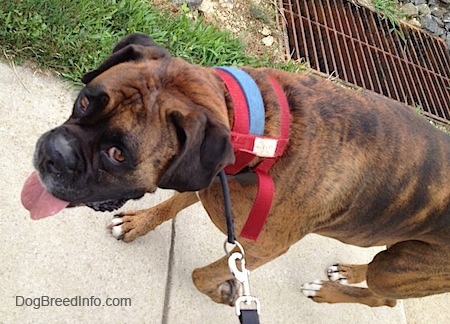 Look at those eyes. Everyone is his friend. He's not thinking about challenging anyone. He is relaxed and happy knowing he does not have to worry about taking care of a pack of humans. The humans are there to take care of him. He knows the rules and enjoys following them. For those who want a guard dog, no worries. If his pack is threatened both dogs will still be happy to step up and help the packleader defend against the threat. Since they are not in charge they look at the humans for direction and are ready for whatever command is given. But in the meantime they can be stress free.

Question:
If I am 100% pack leader will my dog still act as a guard dog if it is ever necessary? How do I balance this to keep the dog as a guard dog? I wouldn't want a person that broke into my home to get a free pass.

Answer:
You can never take the guard out of a guard dog, no matter how submissive that dog is. If there is a threat all members of the pack defend. Also, since dogs can read the moods of other beings the dog will know if someone has bad intentions. A dog will not ignore that if it thinks you are in danger. The other point is if you know for a fact that your dog is perfectly balanced and he starts acting out of the ordinary, you will know for sure that he senses something that is not quite right. As submissive as my Boxer Bruno is, he still will bark at the door if he sees someone coming down the driveway. I could teach him not to bark, but I can never take the guard out of him because it is an instinct. Submissive dogs are more likely to listen to a human's commands, but that does not mean they will not step up and defend. All members of the pack will step up and help the rest of the pack if need be.