A Senseless Death, A Misunderstood Dog: A True Story

In Loving Memory of Rondo 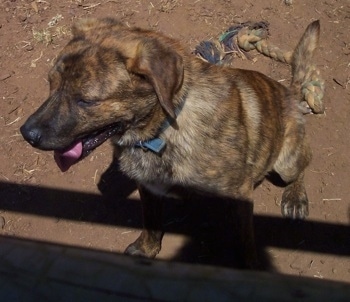 "I'm a volunteer at a local shelter. I worked with a male Lab mix named Rondo. The very first day, I taught him to sit, not to hump, not to jump on me. The second day, I taught him how to loose-leash walk. The third day, we started working on sitting while I opened the gate. The fourth day, we worked on sitting and staying as I came into the kennel. On the fifth day, Rondo was a pro! So sweet, so eager to please, loved to be petted and praised. Over the weekend, an inexperienced employee put him in an exercise cage with another intact male and they fought. When I went in today, they informed me that Rondo and the dog he fought with were scheduled to be put down tonight. I took Rondo out and loved on him and played with him for his last hour. When I was crying, he kissed away my tears. When the man came to take him away, he sat so politely at the door to enter after the human. He learned so much in just a week! I was able to find a place that would take the other dog in the fight, but I couldn't find a place for poor Rondo, because he's not a purebred and doesn't even resemble one. He's gone now and I feel just horrible and sad and angry. Neither dog had a mark on them, and they had never shown signs of aggression before. When I begged for more time, I was told that he was too much of a liability. Do you have ideas on who I might be able to call the next time something like this happens? I don't know if I could take this sort of thing twice. I mourn Rondo. Thank you."

Unfortunately stories like this happen each and every day. Thousands of dogs are killed daily, simply because they were misunderstood.

Let’s take a closer look at Rondo. I don't know why he was at the shelter, and I don't need to know why. Dogs live in the moment and Rondo was not thinking about his past life, no matter what it may have involved. Dogs react to the present situation.

A shelter worker, who understood what dogs need as animals, took Rondo under her wing. On the first day she taught him to sit, not to hump and not to jump. What she told Rondo was, "I am now going to be your pack leader. You respect me, and you do not jump on me. Give me my space and do not mount me." Rondo happily accepted this. All he wanted was for someone to tell him the rules. Dogs need rules. They long for them, they instinctually need them.

The next day, the shelter worker taught him to walk without pulling. She taught him to follow his pack leader. Something else dogs need. They need to walk in a manner that satisfies their instincts to walk. Instinctually dogs migrate daily. Walking your dog the proper way satisfies this canine instinct. 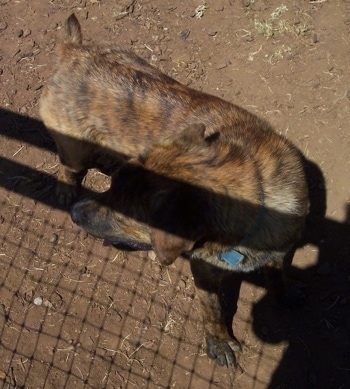 The third day, the shelter worker started working on sitting while she opened the gate. This was teaching the dog respect, and giving him much needed rules. Human opens the gate, but it does not mean you are allowed to leave. Rondo was learning to respect the human. When a dog gives a human space, it is respect. For Rondo to sit down when the gate was opened was respect. No one had told him this before. This was new, and he liked it. 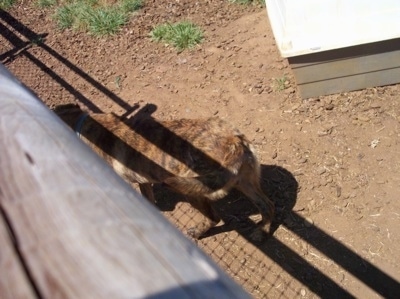 The fourth day, the shelter worker worked on sitting and staying as she came into the kennel. This was not only safety for the dog, but also challenged the dog's mind, at the same time giving him a clear place in the world. I am a dog, and you are my leader. When you come in, I give you your space while you enter. In the wild the followers give the pack leader space. Rondo was starting to understand his place, something all dogs long for.

"On the fifth day, Rondo was a pro! So sweet, so eager to please, loved to be petted and praised." Rondo, for the first time in his life, was understanding what was wanted of him, and he was a happy dog.

Rondo's fate was met when, over the weekend, an uneducated worker put him in a kennel with an un-neutered dog. So there were two unfamiliar, intact dogs thrown into a cage without proper supervision. The dogs got into a scuffle. One fight and the shelter wanted no part of either dog. The dog that fought with Rondo was a purebred and a place was found for him. However Rondo was not so lucky. No one wanted a mutt and Rondo was suddenly "labeled." One moment of his life, he was understanding what the humans wanted, the next moment of his life he was put into a pen with another male dog...and the decision was made Rondo must be put to death.

Why did the dogs fight? For one, neither was neutered. An un-neutered dog has a stronger instinct to protect his territory. Here you had two intact dogs. Chances are, they were not properly introduced; the worker most likely opened the gate and shoved the dogs together. The dogs were most likely in an excited state of mind when they were put together. No human who understood dogs was present. There was no one there to communicate to the dogs fighting was an unwanted behavior.

Even the state of mind of the human could have set the dogs off. Dogs have an ability most humans have let fall dormant. They can read energy. In other words, they can read a human’s emotions. Had the worker been anything but assertively confident, both dogs would have picked up on the human’s negative emotions. This, along with all of the other circumstances of the moment, could have set them off. Remember, dogs live in the here and now; they do not think, they just react. 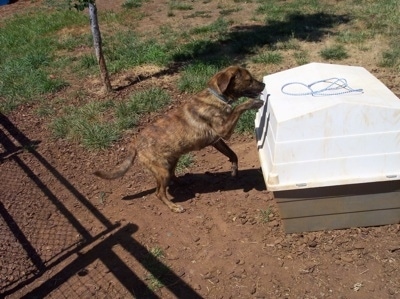 The shelter worker who was making such good progress with Rondo had one hour to spend with him before his life was to end. To Rondo, the dog fight was no longer in his mind. That moment in his life was gone. When the man came to take him to be killed, Rondo didn't have a clue what was happening. He respected this human who was taking him away. He sat so politely at the door, allowing the human to enter before him (the pack leader goes first). And that is where Rondo's life ended. It ended because of the lack of understanding most humans have for dogs. Dogs are canines, they are not humans. Fights are not premeditated. Nothing in a dog's life is planned out. Killing a dog for the actions of one moment of his life is cruel, and it makes no sense. If only all of the shelter workers understood dog psychology; how to communicate with the animal we humans choose to bring into our homes. If only all dog owners took the time to understand the psychology behind the canine we call "man’s best friend," there would not be so many dogs in shelters in the first place.

If you are currently having issues with your dog, before you take him to a shelter, where he may suffer the same fate as Rondo, stop and think about your issues and why they are happening. If all of a dog's instincts are satisfied, the issues will cease to exist. Is your dog getting enough exercise? Is your dog being walked in a way that satisfies its migration instinct? Are you the pack leader? Does your dog have separation anxiety? Are you giving your dog rules to follow, and limits as to what it is allowed to do? Are you properly communicating to your dog what you want of him or her? From tea cup Chihuahua to Pitbull Terrier, they all have the same instincts.

Looking for a dog? Consider a shelter dog. Since dogs do not think about or dwell in the past, nor think, worry or dwell about the future, you can get a dog from a shelter and start over as if their entire life starts the day you bring them home. They may have some bad habits, or things no one ever told them were unacceptable, however the dog can be rehabilitated into what you want it to be. It is much easier to rehabilitate a dog than it is a human, because to a dog, it is all about the present moment. Make him understand what you want with proper communication and voila, you can have yourself a brand new dog. Not every dog in the pound will come with issues. If you bring a dog home and do right from day one, you may never notice, or may never understand why anyone would have given the dog up. To understand how to properly introduce a dog to their new home, the DVD Cesar Millan's Mastering Leadership, Your New Dog: First Day and Beyond is strongly recommended. Watch the DVD first, and then go find your new friend!