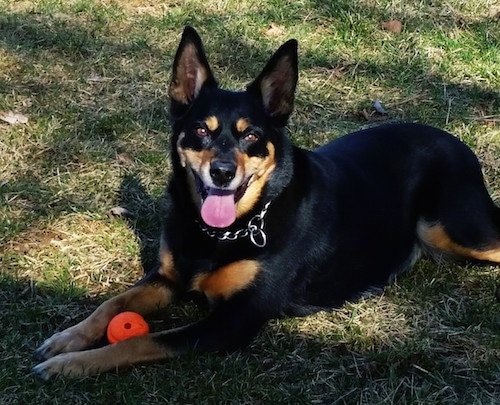 Maya "Dobie" the Australian Kelpie at 9 years old—""Dobie" is a 9 year old Kelpie that came from LedgeRock, Kelpies bred by Linda and Bill Lehman. She is pure bred out of "Capree Boston" and "LedgeRock Morgan" she is my second Kelpie and probably the only breed I'll ever own again. I train horses so she is able to get the exercise she needs. Her favorite thing in life is swimming and will work and or play until she drops. Than eat / sleep for 30 minutes and be ready to start over. They are by far the most intelligent dogs I've ever seen and are incredible at problem solving. They learn everything extremely fast and are extremely loyal. They are great with kids and other dogs. They will immediately teach pups and even try to teach children. Absolutely the best dogs, as long as they receive the exercise they need to stay mentally focused and relaxed. Not a couch dog in any way and mental stimulation is as important as physical exercise."

The Australian Kelpie has a compact body and well-developed limbs. Slightly longer than he is tall, the Kelpie has a broad chest and firm hindquarters that contribute to his flexible, energized appearance. The head is long and narrow. The medium length tail is low set. The short, compact feet have well arched toes. The double coat consists of a short and dense undercoat and a hard, straight and weather-repellent outer coat. Color possibilities include black and red, each with or without tan and fawn, chocolate and blue. Kelpie owners are more interested in the breed's working ability then its appearance.

A compact, robust, enthusiastic and tireless working dog. Excellent at herding, the Australian Kelpie is the most popular and successful working dog. Kelpies are devoted one-man dogs but far too work-oriented and energetic for a couch dog or apartment existence. Their easy trainability and keenness on the job make them a fundamental component of the Australian workforce. They are ready to respond immediately to any signal given by their masters, even from a great distance. They are good with children when they are raised with them from puppyhood and/or properly socialized. Kelpies will try to herd other dogs, pets and animals whether they want to be herded or not. This workaholic will work until it drops. They are independent and in business for themselves rather than for pleasing a handler. Boredom is the breed's doom and the owner's as well. In their native country of Australia, Kelpies work all day even in intense heat, covering 1,000 to 4,000-plus acres. The breed uses its "eye" similar to the Border Collie's on the tractable stock, but utilizes its nipping ability to turn more stubborn cattle. Kelpies can muster thousands of sheep from pasture to pen to truck. When a flock of sheep is packed as tight as Times Square on New Year's Eve, they will look for the shortest way to the other side, which is usually in a straight line. The very clever Kelpie will jump on the back of the nearest sheep and run lightly across the flock to reach the other side. They make excellent watchdogs and can also be trained as seeing-eye dogs. The Australian Kelpie is not an aggressive dog, but he can be protective when needed, and will guard his family and their belongings when necessary, regardless of the risk to himself. With the deep intelligence which this breed exhibits comes a high dominance level. Meek owners will not do well with this breed. They need an owner who knows how to display natural calm, but firm authority over the dog at all times. With the right type of owner and the proper amount of daily metal and physical exercise this breed can excel. Problems can and WILL arise with meek owners, and/or owners who do not provide the proper amount and type of exercise. This breed does best with a job to do. If you do not have time to extensively work with and exercise your dog, or do not fully understand canine instincts and their need to have leadership, this is not the breed for you.

The Australian Kelpie is not recommended for apartment life. They are working dogs that need plenty of open space to run and will be happiest with a job to do. Their all-weather coat allows them to live where it is hot as well as where it is cold. They will be content to live outdoors with adequate shelter.

The Australian Kelpie is a working dog that demands a great deal of exercise, preferably with some kind of job to do. Their energy levels are extremely high!! They are workaholics and will run until they drop!! They need to be taken on long daily walks. Makes an excellent jogging companion. Do not allow this dog to walk ahead of you on the walks. He needs to be beside or behind you to re-enforce the human is alpha.

This breed is easy to groom. An occasional combing and brushing is all that it needs. Bathe only when necessary as it will remove the natural oils in the weather-resistant coat and dry out the skin. This breed is an average shedder.

Although many still believe the Kelpie is a Dingo crossed with the Border Collie, more accurate documentation reveals the breed's development from English North Country Collies of the Rutherford strain. These hardy British working herders, like many sheepdogs, were imported to Australia during the latter half of the 19th century. Today nearly 100,000 Kelpies are employed on that continent. Despite their relatively small size, Kelpies are without limitations, capable of working cattle, goats, poultry and reindeer. They will excel in competitive obedience. The name "Kelpie" comes from the water kelpie mentioned by Robert Louis Stevenson, the Scottish writer, in the novel Kidnapped. This breed has been known since 1870. 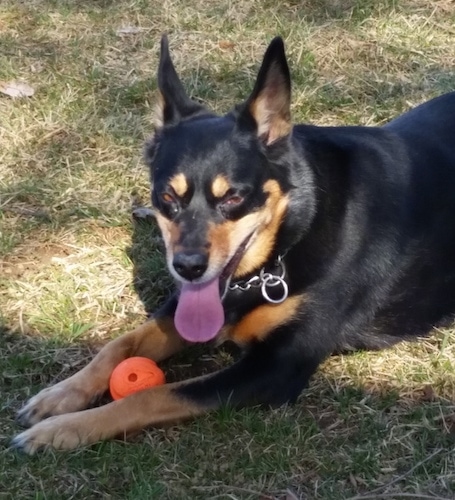 Maya "Dobie" the Australian Kelpie at 9 years old with her orange ball. 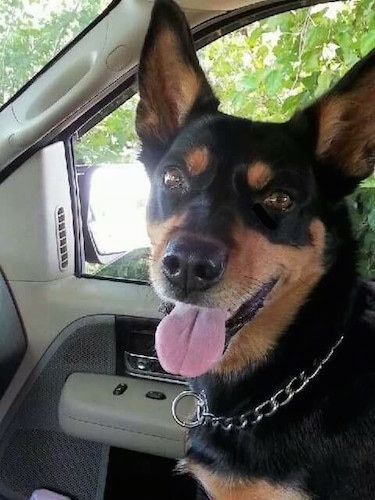 Maya "Dobie" the Australian Kelpie at 9 years old very happy about going for a ride in the car. 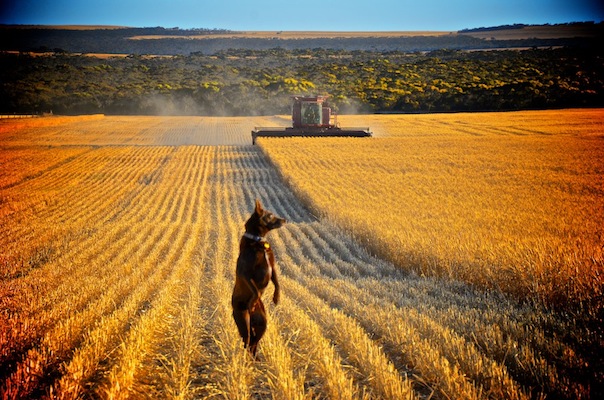 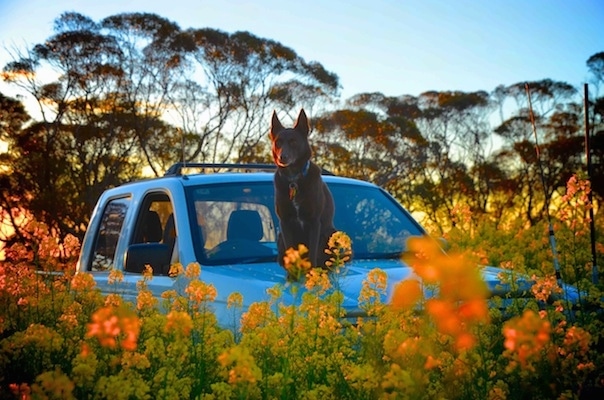 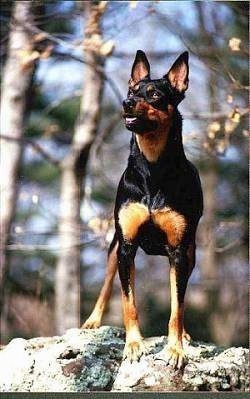 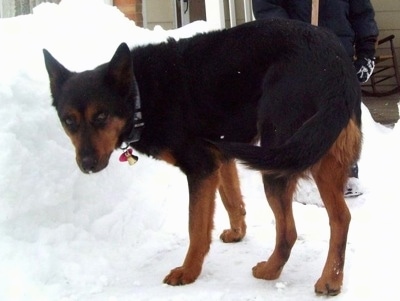 "Margie is an 11-year-old Australian Kelpie. Her photo was submitted about 5 years ago here at dogbreedinfo.com when she was 6. She was a little overweight then, but we have since changed her food to a senior diet. She is healthier than ever and is commonly mistaken for a pup! We are a military family who's recently deployed to Okinawa, Japan. We were not able to take Margie with us and leaving her behind was and still is heartbreaking. She has been with our family for 10 years and is without a doubt the smartest, most adaptable and well behaved dog I have ever owned! She is now in the care of my mother who owns a small farm. Margie, with her ever-watching eye, loves spotting then chasing off the squirrels and deer that try to wander on her property. We have another 3-4 years before we return to the States and "reclaim" Margie...that is, IF my mother gives her up!" 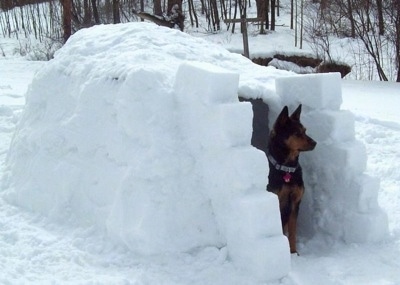 Margie the Australian Kelpie at 11 years old inside an igloo 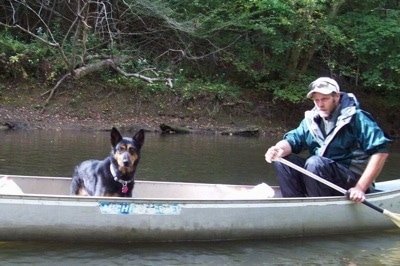 Margie the Australian Kelpie at 11 years old on a boat 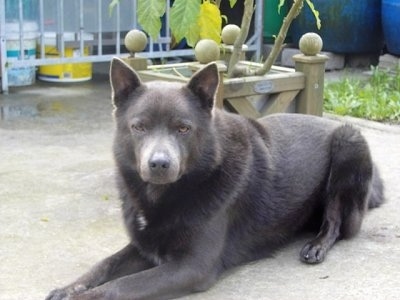