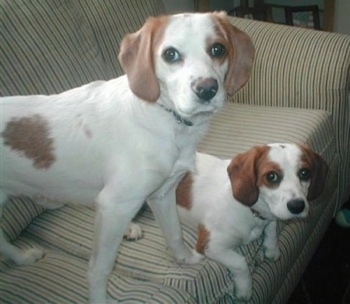 "This photo is of "the boys." Austin is on the left and Pablo is on the right. They are 7-month-old Beaglier brothers with looks that stop traffic. They both have silky Spaniel-like hair, but Austin is definitely the more Beagle of the two, while Pablo has the Spaniel's build. Interesting too, is that they both have the "Buddha spot" in the middle of their foreheads. Neither of them have the Beagle howl, but both can bark up a storm. They both love to roughhouse and play, and are just discovering the world of camping and all the creatures in the woods. Right now squirrels are a major concern, and chipmunks drive them both crazy. They are two of the most affectionate dogs I've ever known and are extremely sociable, both with people and other dogs. They are very intelligent, and seem easily trained since they catch on to commands quickly. They're also excellent watchdogs, barking whenever someone is on the porch. The only really bad habit they've exhibited is chewing—so all shoes are closeted unless we're wearing them. They love their twice daily walks and relish going to the park. Their playing and romping through the house always brings a smile, and I think it's good that they have each other for company during the day."

The Beaglier is not a purebred dog. It is a cross between the Beagle and the Cavalier King Charles Spaniel. The best way to determine the temperament of a mixed breed is to look up all breeds in the cross and know you can get any combination of any of the characteristics found in either breed. Not all of these designer hybrid dogs being bred are 50% purebred to 50% purebred. It is very common for breeders to breed multi-generation crosses. 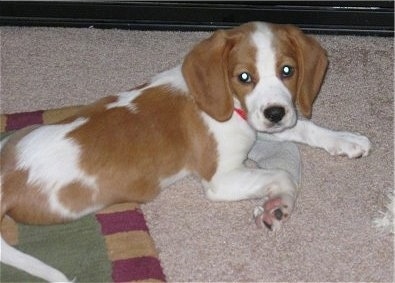 "This is Kal. He is a Beagle / Cavalier King Charles Spaniel. He is 8 weeks old in this picture. We bought him one week before Uno (Beagle) won the Westminster Dog Show. We did not know how popular Beagles would become. Kal is the most adorable dog and he gets tons of compliments wherever we go. He starts puppy kindergarten soon."

"He was extremely easy to housetrain. We were very pleasantly surprised by that. He rarely makes an accident in the house. Sometimes though, when he gets excited, he will go pee in the house. He loves to play fetch with a small tennis ball (uncharacteristic of Beagles, from what I have read). He is a total lap dog! He loves to cuddle and be around his human mommy and daddy. So far he has not strayed too much when outside. But that will soon change from what I have read about Beagles. They follow their nose. But for now, he stays very close to us when outside. He especially likes to chew on shoe strings and zippers. He loves to dig in the mulch (and eat mulch). He has just started to hide his biscuits in the cushions of the couch. He loves to be under things, like chairs, etc. That is his pack instinct I guess. He is very loving and affectionate and loves to be near humans." 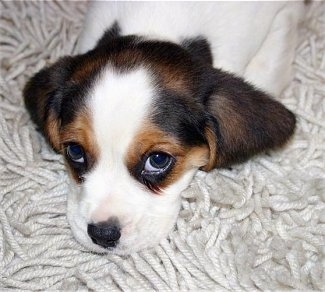 Fifa the Beaglier (Beagle / Cavalier mix breed) puppy at 12 weeks old—"He has a very, very cute face, and a lovely demeanor. He's very clever but does follow his nose Beagle style! He loves being in the company of people and animals and loves to play." 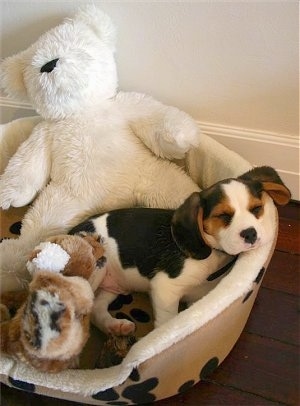 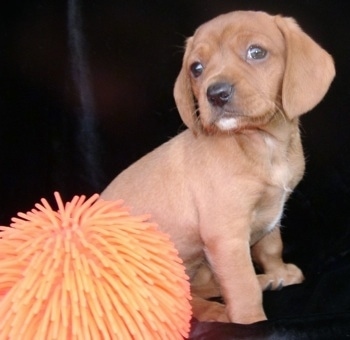 "This is of my dog Fergi. She is a mix between Beagle and King Charles Cavalier. I adore her. She has the greatest temperament. Fergi was 9 weeks old when I took this photo. She is called a Beaglier. I raise Beagliers and people love them." 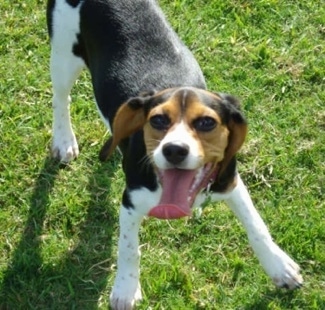 "This is Lilly and she is a Beaglier. She acts mainly Beagle. We absolutely love her because she listens extremely well. We started to train her when she was only 2 months old. I would call her to me and whenever she came I would give her a treat because Beagles love food! After a while it got very easy to train her. She is very active and loves to go on long walks. She loves to explore new places. Lilly is also very fond of toys! She will play all day if I let her. Lilly gets along great with other animals and is wonderful around kids. She is so loving and gives lots of kisses. Her one bad habit is that she loves to get into things when you leave her alone." 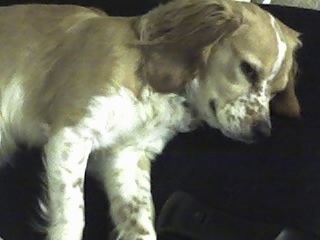 "This is my beautiful little Beaglier princes Lili at 7 months old. She is a very well-mannered little pooch, but she has her moments of beastliness, usually when she doesn't get at least one long walk a day. I have never had such a playful adventurous dog before. I think she inherited the best of both breeds to be the perfect hybrid Beaglier not only in the looks department, since she is obviously gorgeous, but also in temperament. She loves to play fetch and tug-of-war, and she chases her tail. She loves freeze-dried liver treats. She is a loyal and devoted little girl and though in the past I would never talk baby-talk to a dog, I can't help myself with her I call her sweetums while I rub her belly and she loves it. She has been going thru a stage of chewing my things (my pretty green rug in my bedroom), but if I keep her supplied with rawhide chips she does better. I was never very interested in either the Beagle or Cavalier King Charles Spaniel as a dog for me but when I saw her I fell instantly in love. I would never breed her or seek out a Beaglier since I believe there are so many homeless animals in shelters and such that deserve to be rescued but I am so thankful she found me." 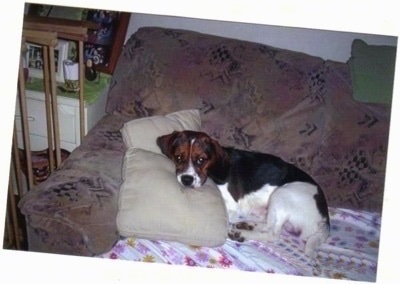 "This is my aunt's dog Bam. Bam is a Beagle / Cavalier mix. Bam is a boy. He is 2 years old. Bam is very fun and outgoing, and is sure to put a smile on your face. Bam likes to go on walks, loves playing with his toys and loves being outside. Bam has a lot of good habits such as he doesn't go to the bathroom inside and he also doesn't chew or nibble or eat any furniture. But Bam also has some bad habits because Bam is somewhat of a hound; when he smells a scent he tries to get away and has sometimes gotten out of the fence, but thank God we have found him. Bam's temperament is most outstanding I would say because he doesn't growl, snip, or bite anyone. He is also most friendly around babies and people. Also I might say though, in case of an emergency, I think Bam would try to protect us to the best of his ability. Throughout the day Bam gets a lot of exercise between running around outside, being walked, and playing tug-of-war with his toys."