C-Section in an English Mastiff 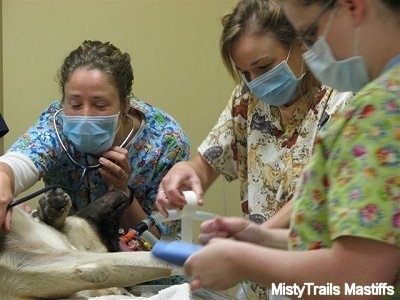 An English Mastiff being prepped for a C-Section.

Many Mastiffs do not free-whelp for various reasons, usually because the birth canal is too long and their heads are very large. Puppies of Mastiff and bully-type dogs are more often than not born via C-section.

Make sure your vet is aware that some large breeds are sensitive to many anesthetics. For this procedure, two vets were present two vet tech anesthetists, two assistants, PLUS myself and one friend to catch the puppies and get them going. 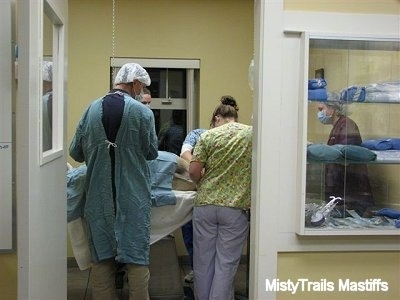 Sassy is put under as LIGHT anesthesia as possible, also taking note that a dog of her size, IF she came awake, and decided to try to get up, would spell big problem. 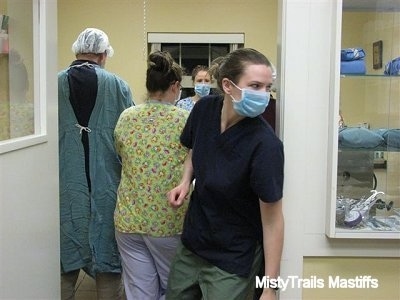 Are you READY, Bev? Pups are coming.

I am ready with stacks of towels on the warmer, hemostats and scissors for cords, etc. 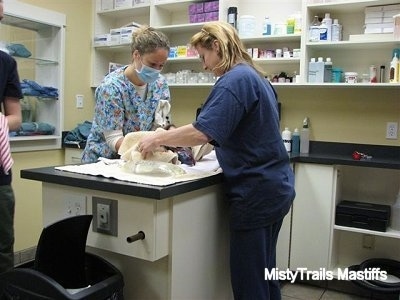 First puppy out; this puppy was in the birth canal. 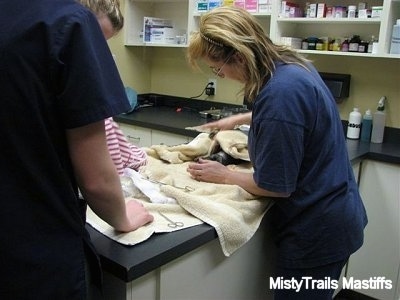 Sorry NO photos for the chaos after this. The first three puppies were spread, as one was in the birth canal, two were in one horn, and nine puppies were in the other horn (if she tried to deliver, the chances she would have torsioned were high). We got NO more photos after this, as my camera girl was needed. Pups were coming to me so fast, I couldn't even clamp cords, or cut; we just were getting them all breathing, and dealt with cord care later. So far everything is going well. Only one puppy needed a bit of a kick start, and one small puff of mouth-to-mouth. PHEW!! That was the busiest I ever been...WOW! Twelve puppies, all breathing, all thriving.

Now we can do cord care and count sexes...eight girls, four boys; all is good (so far). 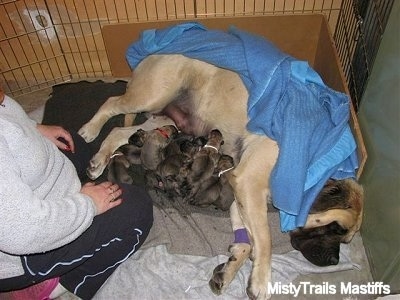 The operation is a success; Sassy the English Mastiff had 12 puppies. 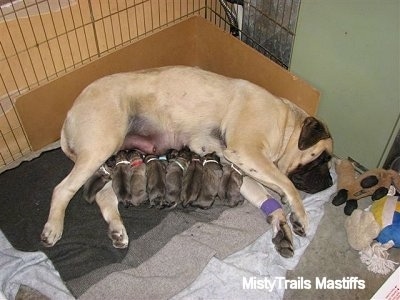 Sassy is pretty out-of-it for a couple days, especially the first day.

BUT, pups MUST suckle. 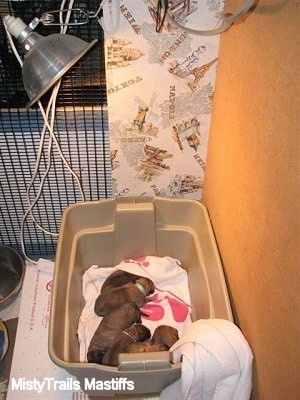 Pups MUST have heat. 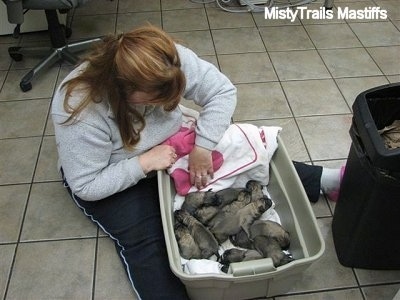 Extra care should be taken to watch over dams that have had C-sections. If the mother is put to sleep, then has a C-section, she'll wake up at the vet and then you are going to introduce her to the pups which she is NOT going to believe or understand are hers.

Then you are going to put them on her teats, and let them suck; she may NOT like this. You MAY have to hold her down. One hundred percent supervision is a must after a C-section. But after the pups nurse for 48 hours, her hormones should kick in, at least 80% of them do. It is an important step in whelping that certain hormones are released during the birthing process. These hormones, coupled with the sight of the pups arriving, and then licking the membrane, or eating part of the placenta, all play a vital role in the process of becoming a good mother. When these steps are skipped, like in the case of a C-section, the dam often feels estranged with the pups—she misses vital steps in the natural process, and that's what can cause dangerous episodes to occur.

For example, it has been noted in some breeds that a dam can kill and eat her pups, but rejection is the most common occurrence in all breeds, so you need to assist to teach them to be good moms, as it will not always come naturally after a C-section. Also with sedation, you cannot leave the pups with the dam, as even the BEST mom could lie on one and not realize it in her drugged-up state. C-sections are sometimes necessary. If your dam needs a C-section, stay with her and the pups and carefully monitor their interaction. This should be done even with natural whelping, however extra time should be spent when a C-section has been performed. After a C-section, keep the pups in a warm box, and the dam separate, unless you are in the room.