A day in the life with Bruno the Boxer. 5 years old—90 pounds, 24 1/2 inches from the ground to the highest point of the shoulders (the withers). 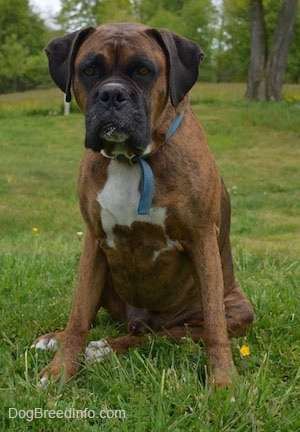 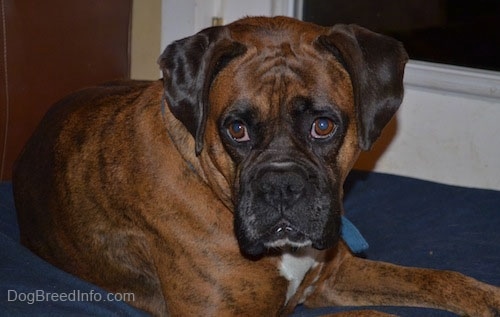 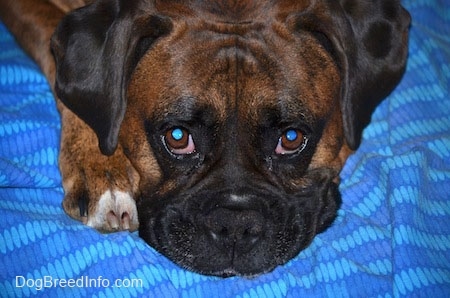 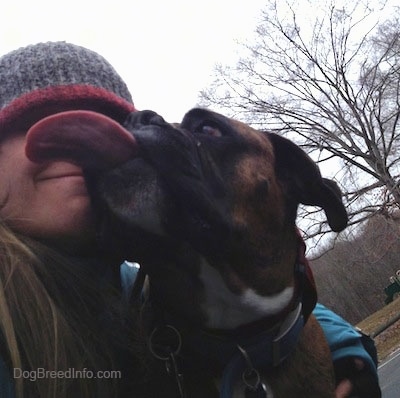 Getting your face too close to Bruno means...the tongue!! When we are out on a walk people often ask to pet the dogs. I always tell people, yes he loves to be petted, just watch out for the tongue! This past weekend at a flea market, a lady bent down to pet Bruno and she got that big tongue directly into her mouth. That got her standing up a little straighter! 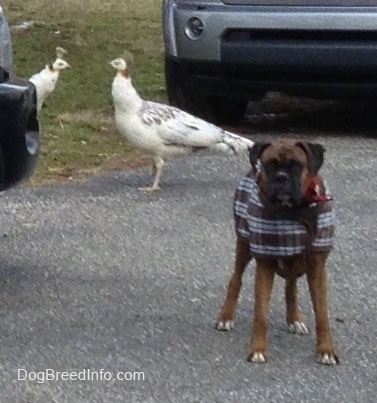 Bruno completely ignores the birds. I know his energy is good around them because the birds are not afraid of him. 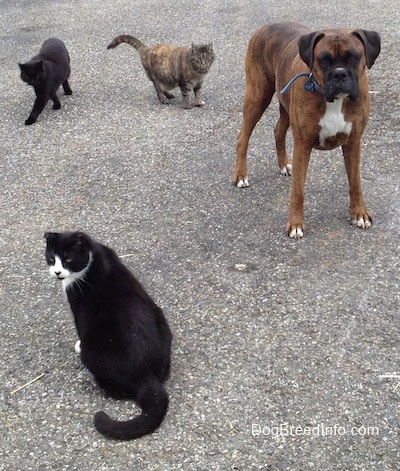 In fact, other animals like his energy so much that cats flock to him. I feel bad for him sometimes because I look out the window and all Bruno wants to do is lie in the sun and sleep but he has cats rubbing all over his face. As usual, he does not care. He just lies there and puts up with them. 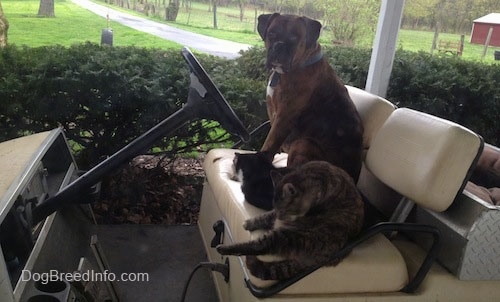 Bruno likes to sit on the golf cart sometimes during the day. No surprise, there are cats hanging out with him. 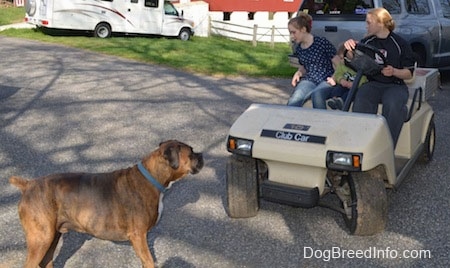 Speaking of the golf cart, Bruno, watch out, the kids are trying to take the baby for a ride and you’re in the way. Sorry buddy, you don't fit this time.

Bruno is good with other strange dogs except for the dogs that challenge him. For example, we were walking at a flea market and a dog from behind one of the stands was barking and growling. The owner of the dog asked if my dogs were friendly. I had said yes, thinking he was asking because he was going to pet them, but before I could say anything else the man unhooked his dog while holding onto his collar and let his dog drag him, pulling hard over to Bruno and Spencer. The dog was dominant and he locked his eyes onto Bruno. I could feel the tension between them and suddenly there were growls and Bruno was one of the ones growling. I pulled Bruno and Spencer back away from the dog as the owner proceeded to pet his dog, telling the dog it was OK. I understand that a high percentage of people do not understand natural dog behavior and the language of the dog, but when a dog is barking and growling, that's a big hint that the dog is not in a good frame of mind. I will never understand some dog owners. The man's dog was already barking and growling and then he lets the dog drag him, and when I say drag I mean it literally, to my dogs while in that dominant state of mind. It's like telling your human kid to go play with the bully kid across the street knowing the kid will call them bad names and might even punch them in the eye.

Two minutes later we were walking past lots of other dogs with zero reaction from Bruno. One Cockapoo was walking in the same direction as us, side by side with Bruno and Bruno didn't even turn his head in the dog's direction. I told the owners their dog had good energy because my dogs were not even looking at their dog. Bruno seems to like the calm, balanced dogs, but does not care for the bullies. Spencer the Pitbull will roll over for a bully dog, but Bruno will growl back. Bruno will listen to me when I tell him NO about reacting to bully dogs. He will look up at me and back down. Sometimes I wish he would be more like Spencer when it comes to other dogs. I hope Bruno does not teach Spencer to react the way he does. If I had to look on the bright side it would be that Bruno lets me know how the other dogs are feeling and he listens when I say no. I often get the feeling he is just trying to tell me what he thinks of the other dog. It’s like a warning: this dog means our pack no harm, but that one does. 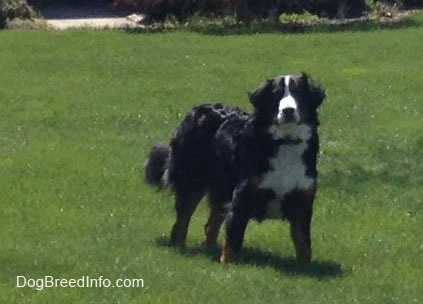 We pass dogs all of the time during walks and Bruno's reactions vary from dog to dog. For example, this particular dog was barking up a storm, but the barks sounded more excited and friendly than dominant. That was confirmed when the Bernese Mountain Dog, who was behind an electric fence, went down into a play bow. Bruno's back end started to wiggle back at the dog and Spencer went into an all-out play bow right in the middle of the street while on his leash. Bruno and Spencer wanted to go play with the dog really badly. Sorry boys, but I have no idea whose dog that is and I don't see an owner. We can't just go crash a yard like that. 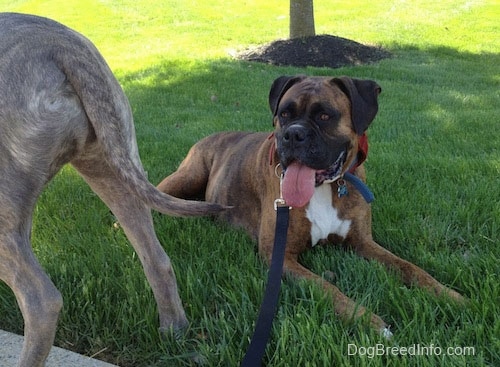 Bruno does not like it when it is hot. By hot, one would think that means summer temperatures, but this particular day it was only 73° F outside and Bruno was hot. He was eyeing up every tree and the shade under it. We were walking through a neighborhood and there was a tree planted out front of every house near the curb. This meant that Bruno was stopping, or trying to stop, at every single house. When he first started doing it I thought he had to go to the bathroom, but no, he just wanted to lie down! Bruno boy, we need to make it back to the car. We can't just hang out in this person's front yard all day long, and the car is not going to come to us. I wondered if Bruno's knee was bothering him. I let him rest a good ten times while we slowly made it back to the car in case his knee hurt. The next day I almost left Bruno home, but he was walking fine and the temperature had dropped into the low 60s. Bruno walked without stopping at all, which makes me think it was not his knees the day before. He was just hot and thought it felt better to hang out under a shaded tree than walk in the sun. Oh Bruno, what are we going to do when summer comes? 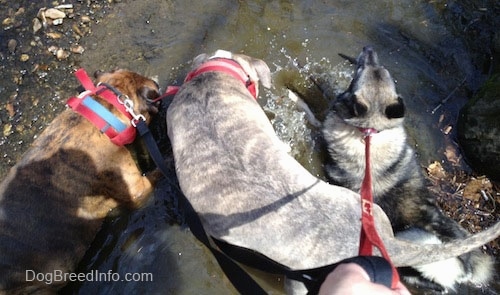 On this spring day the temperature had reached the low 80s F. Once again Bruno was hot. Just when I thought he had to poop, he lay down to rest. It was time to cool him off. We found a stream and Bruno, Spencer the Pitbull and Tia the Norwegian Elkhound cooled off in the water. 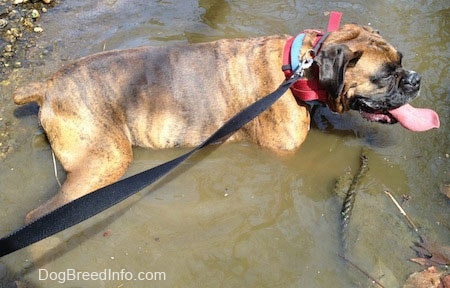 I swear Bruno can smell or hear when there is water nearby. We will often be walking down the street and Bruno knows when there is water down the hill. We walk all over in different areas. Bruno is often in a place we have never been before, yet if he is hot he will pause when we are near water, look over at me and let me know that he would really like to get wet. Bruno's communication is awesome. He makes eye contact and I know he is trying to tell me something. 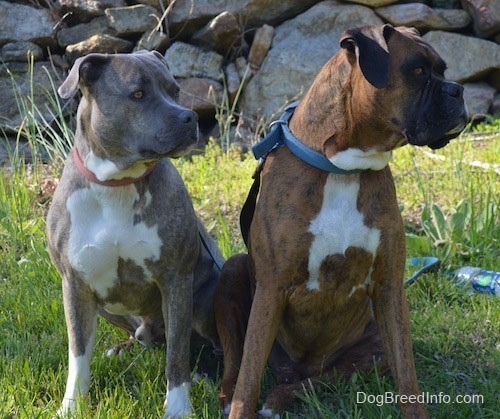 Bruno with his brother Spencer the Pit Bull

Mom if you knew what was down that hole you would be sticking your head down there too. I am not sure if that is a groundhog hole or a fox den, but the dogs think there is something worth while down there.

My Goal for Bruno 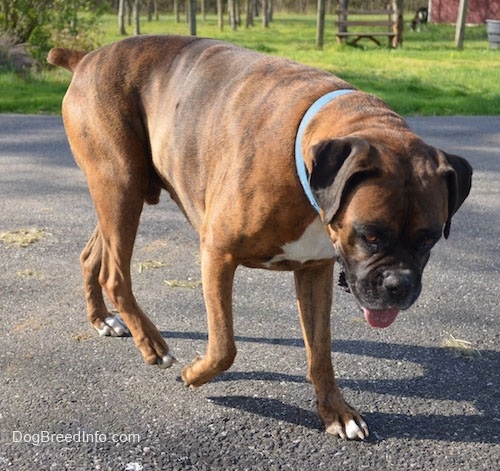 Bruno has had it rough with three knee surgeries and a total of 5 mast cell tumors removed so far. I hold Bruno back a lot when it comes to running full speed and zipping around playing with other dogs. I am afraid he will rip something else in his knee area. As far as his tumors are concerned, if they can be removed and have not spread I plan to remove them. My goal for Bruno is for him to be able to go on walks with the rest of the pack and visit with his doggie friends. While I may not ever let him have an all-out full-speed play session with a bunch of dogs at a dog park, he can still go town hopping, hike and explore and he is a very happy dog. You would think that he would catch on that the vet's office means he might be getting some type of procedure done and maybe he knows that, but he LOVES the vet's office and every single person in it. When he goes he is like a kid in a huge toy store with a gift card. 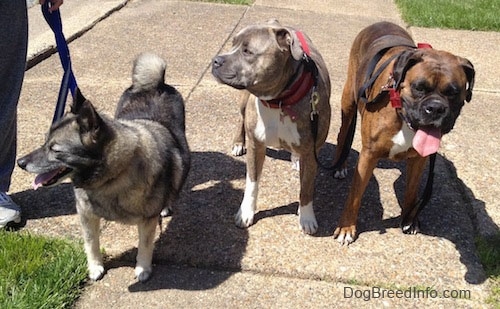 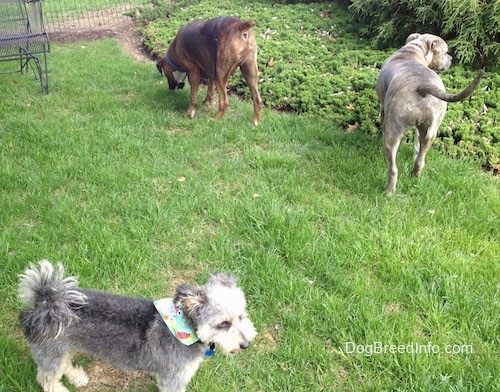 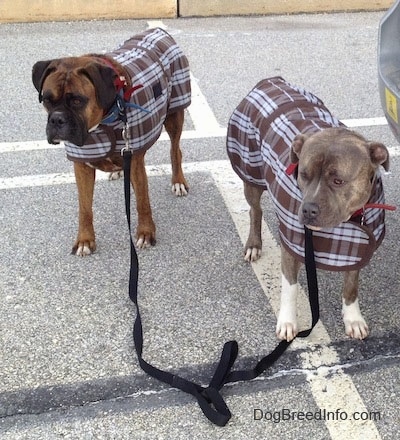 Bruno and Spencer out on a walk