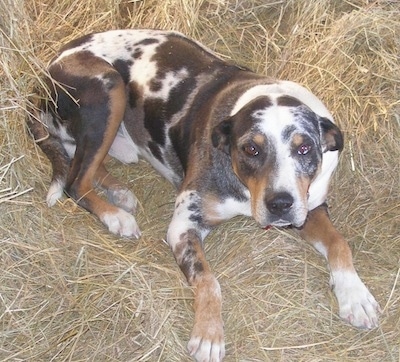 The short, single coat is colored in a merle or black/tan pattern. Some coats can be coarse, but most are short and tight. Color is an especially notable feature in this herder: eye color and coat color work in a very complementary and expressive way. The skull is broad and flat. The legs are solid and strong boned. The deep chest provides for good heart and lung capacity.

The Louisiana Catahoula Leopard Dog is independent, protective and territorial. Loving with its family and all people it knows well but can be reserved with strangers (this would include strange children). Socialize well, preferably at a young age. They need to be allowed to come up and smell a person. They mature right around 2 years of age. Affectionate with his master. The Catahoula is not recommended for an owner who does not take the pack leader issue seriously. For the right owner who understands the importance of structure, leadership, and exercise the Catahoula can make a wonderful pet. The objective in training this dog is to achieve pack leader status. It is a natural instinct for a dog to have an order in their pack. When we humans live with dogs, we become their pack. The entire pack cooperates under a single leader. Lines are clearly defined and rules are set. Because a dog communicates his displeasure with growling and eventually biting, all other humans MUST be higher up in the order than the dog. The humans must be the ones making the decisions, not the dogs. That is the only way your relationship with your dog can be a complete success. This breed needs a dominant owner who shows strong leadership.

Prone to hip dysplasia and deafness. Along with deafness (both ears or just one) this breed can have eye problems (tunnel vision, eye won't open all the way, pupil is abnormal, etc.). As a breed they are relatively free of a lot of diseases. Some older dogs are known to have gotten cancer.

Some do well in apartments while others do not. It all depends on the lines of the dog and how much time an owner spends with the dog and how much exercise it receives. Catahoulas need attention. This is not a dog that can be tied to a doghouse, fed and ignored. Chaining and/or ignoring a Catahoula will either make it shy or aggressive. They need human companionship. This does not mean they need to live in your pocket and cannot be kept outside; this breed needs direction, training, something to do, people, attention, etc. If they are kept outside where it is really cold, they need a good warm doghouse, preferably one that has an entrance and then a turn into the sleeping quarters. That way they are protected from the elements. They need to be kept inside in really cold weather, as they are a single-coated dog.

When not hunting, this breed needs to be taken on a daily walk, jog, hike or run. In addition, they will enjoy running free in a fenced-in yard or safe open area. When Catahoulas play they can be very noisy and physical. People need to be careful and teach the dog to control its play. When playing with this breed, one needs to be careful that they are not hurt by the dog running into them, jumping and bumping them. They do need exercise and will start getting into trouble chewing, digging, barking, etc. if they don't get it. But, they are not a high energy level dog, as seen in Border Collies, Jack Russell Terriers, Fox Terriers, Aussies, and some of the hunting breeds such as the German Shorthaired Pointer. They enjoy participating in agility.

Since the Catahoula is a short, single-coated dog, the grooming needs are minimal. They should have a bath a couple of times of year (unless they get into something and get filthy) and a good brushing once a week. The nails should be trimmed regularly and the teeth kept clean. This breed is an average to light constant shedder. When nervous or stressed, they have a tendency to shed more, especially when you are petting them.

The Louisiana Catahoula Leopard Dog is believed to have originated from Nordic Wolfhound being introduced some three to five hundred years before the Spanish arrived, however, no one will really know for sure. The state of Louisiana is cited as the point of origin, particularly the area of Catahoula. In 1979, the breed was designated the state dog of Louisiana. The Catahoula was named after a Parish in northeastern Louisiana and after the mottled spots on its coat. At one time this breed was used to round up feral pigs and cattle—livestock that had escaped, and was living in woods and swamps. It involved team effort that is highly coordinated and organized, fast paced, dangerous and a marvel to watch. The ideal dog team usually numbers three, and they must work together. Otherwise, one pig can kill all three in a matter of minutes. Each dog has to be aware of what the pig and the other two dogs are doing and react accordingly. Hunters sometimes used the Catahoula to trail and tree raccoons, but this dominant breed is more at home acting the thug with obstinate boars. This dog is used particularly on the difficult task of driving and rounding hogs and unruly cattle.

Also a number of other rare breed club shows. In Canada they are also recognized by a Rare Breed Club 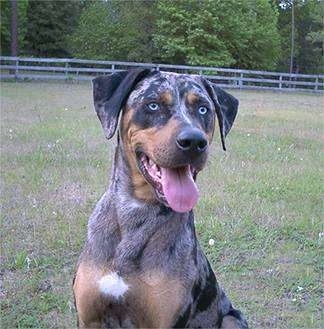 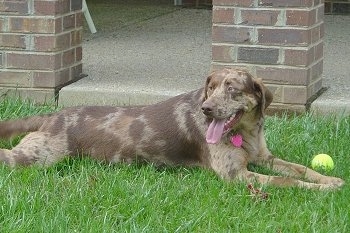 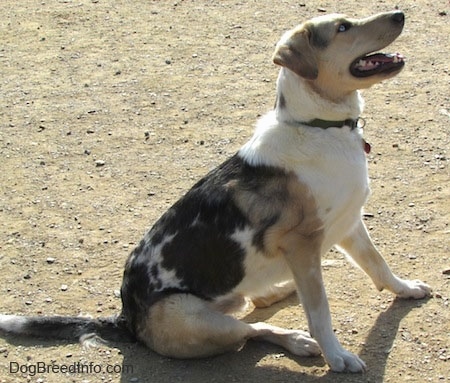 Buster the Louisiana Catahoula Leopard Dog at 2 years old—"Buster has one blue eye and one brown eye." 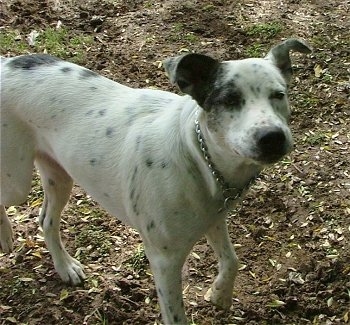 Blue the Louisiana Catahoula Leopard Dog—"He is about the sweetest and most loving dog; he is a mama's boy." 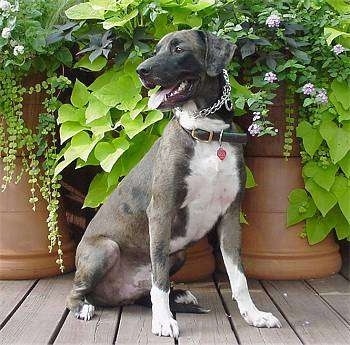 This is Easy Joseph, nicknamed Elmo. 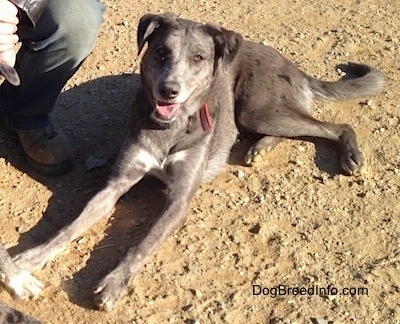 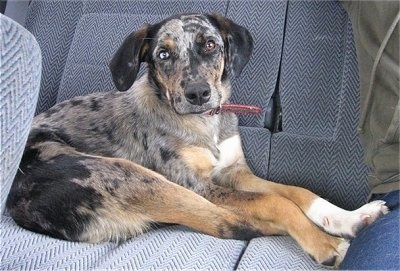