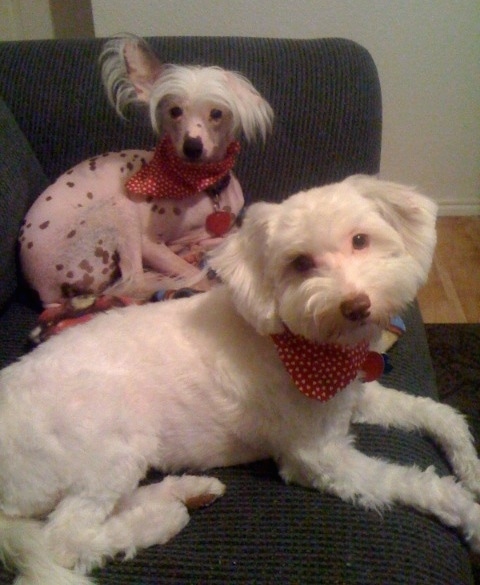 "These are my two Chinese Cresteds, Preston (hairless) and Baxter (powderpuff). They were littermates and are about 18 months old in the picture. Very well-mannered dogs, great with children and both love the outdoors surprisingly in this Texas heat."

There are two distinct varieties of the Chinese Crested Dog, the "hairless" and the "powderpuff." The hairless variety is just that: hairless, except for its feet, head and tail. The "powderpuff" has a long, soft coat. Some breeders to this day "bucket," as they call it, the powderpuffs when they are born, simply because they claim they are not worth much. When a breeder "buckets" a puppy it means they drop it in a bucket of water when it is first born and let it die. The powderpuff variety is a beautiful dog with a full coat of fur and many people do not realize they exist because a lot of websites only show the hairless variety. Both varieties are equally recognized by the major kennel clubs.

The skin and coat can be any color, and solid, mixed or spotted all over. Both hairless and powderpuff varieties can be born in the same litter. The head of the Chinese Crested is wedge-shaped when viewed from the top and the side. The muzzle has a slight stop, and tapers nicely into the cheeks. The color of the nose can be dark to light, depending on the skin and coat color. The almond-shaped eyes and eye rims will have a color that matches the color of the dog. The large ears are not cropped and stand erect. Dewclaws may be removed.

The most popular of the hairless breeds, the Chinese Crested is still very rare. These dogs are alert, charming, agile and lovable. Though affectionate and playful with children, children should be taught not to be rough with this breed as it is friendly, but it does not have the protective hair that other breeds have and can get injured easily. It is an entertaining and amusing companion. Do not baby this breed or you might cause it to be timid. Socialize your dog well, starting when it is a small puppy, exposing it to loud noises and outside activity. This intelligent dog has the ability to perform tricks. They are generally good with other pets. They are not barkers. Chinese Crested Dogs like to climb and dig holes. They tend to become very attached to their owners. These dogs enjoy companionship and need constant human leadership. Do not let this wonderful breed fall into "Small Dog Syndrome" where they lack a human pack leader. It is easy to baby a small dog, however, doing this can cause many unwanted behaviors. If your dog growls, guards objects, snaps or bites, the dog has been allowed to take over and be pack leader to the humans. These behaviors can be corrected as soon as the humans start displaying the proper leadership.

Gains weight easily; do not overfeed. Exposed skin on the hairless dogs needs special care to prevent skin irritations. The hairless dogs do get sunburn and a good sunscreen should be used if the dog is going to be out in the sun. The hairless variety is prone to tooth loss and decay. Powderpuffs have healthier teeth. The hairless variety has the ancient forward-pointing canine teeth or "tusks" as they are called, but usually these are the first teeth to fall out. A high percentage of Chinese Cresteds are allergic to wool and lanolin. Both the hairless and powderpuff dogs are born in the same litter. Each hairless dog carries one gene for hairless and one gene for hair. Two hairless genes are fatal.

Good for apartment life. They are fairly active indoors and will do okay without a yard. They should wear a sweater in cold weather.

Although it is tempting to carry these dainty creatures about, these are active little dogs that need a daily walk. Play will take care of a lot of their exercise needs, however, as with all breeds play will not fulfill their primal instinct to walk. Dogs that do not get to go on daily walks are more likely to display a wide array of behavior problems. They will also enjoy a good romp in a safe, open area off-lead, such as a large, fenced-in yard. Don't think that just because he is small he should be confined to a small space.

Chinese Cresteds are very clean, with no doggie odor. Powderpuffs need a lot more grooming. Daily brushing of the powderpuff's long, fine, double coat is recommended, taking extra care when the dog is shedding. The wooly undercoat becomes matted if neglected. Bathe the hairless frequently and massage a little oil or cream into the skin to keep it supple. These dogs shed little to no hair and are great for allergy sufferers. The hairless variety is not prone to fleas. They can get ticks just like humans, but they are easy to see.

The Chinese Crested originated in Africa where they were called "African Hairless Terriers." Chinese trading ships stopped along the shores of Africa on their routes and brought the dogs onboard their ships to hunt vermin. They renamed the dogs "Chinese Crested" and the name stuck. Ancient wandering Native American tribes (Aztecs) kept them as bed warmers and also ate them. Two Chinese Cresteds were first exhibited in 1885 at the Westminster Kennel Club Show in New York. However in 1965, due to the lack of a national club to support the breed and the dogs’ very small numbers, the AKC dropped their eligibility to be shown. The first American breed club was established in 1979 and they were recognized by the AKC in 1991. The stripper Gypsy Rose Lee used to breed Chinese Crested. The Chinese Crested is often shown in rare breed dog shows. 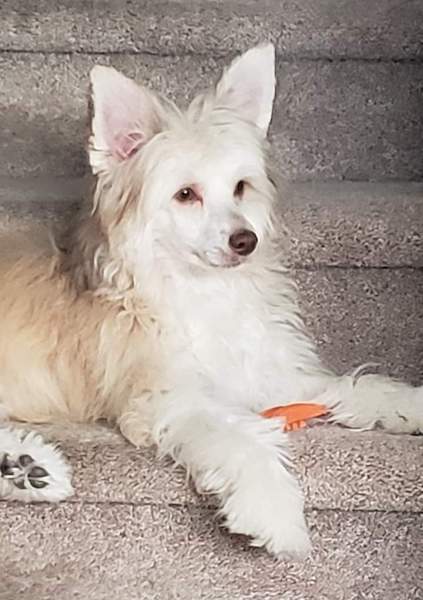 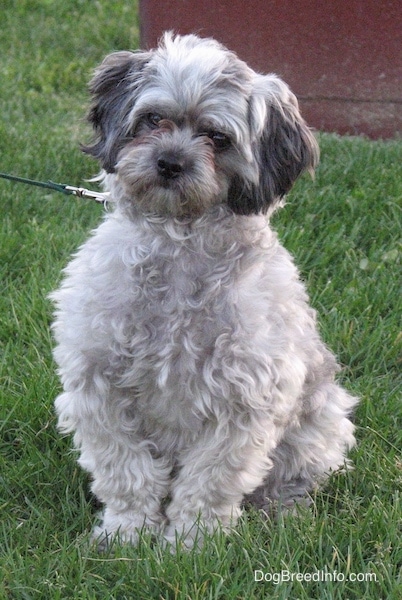 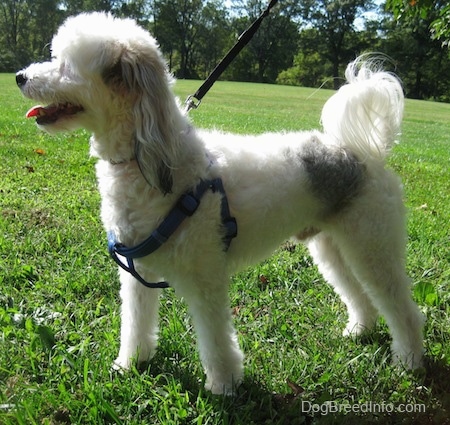 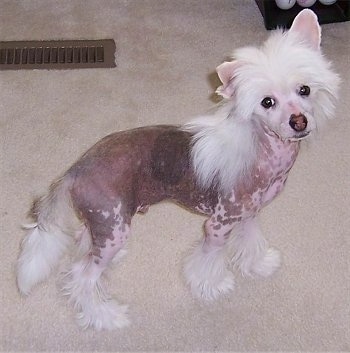 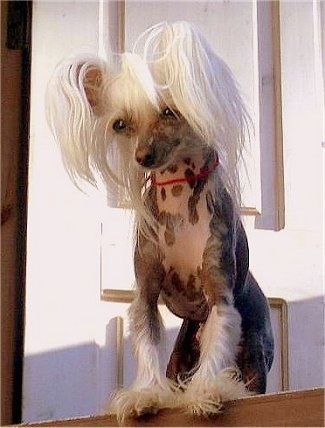 Faiter Samuraj aka Pixie the Chinese Crested all grown up 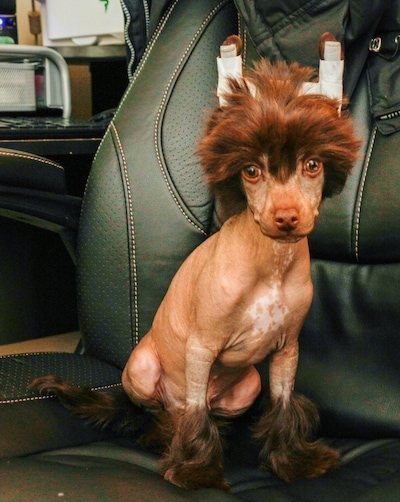 Jewel's Simply Irresistible at Hpnotik, aka Sisko the Chinese Crested dog as a puppy at 12 weeks old-"Sisko is a chocolate hairless Crested boy. He has his ears taped in the photo to help them stand!" 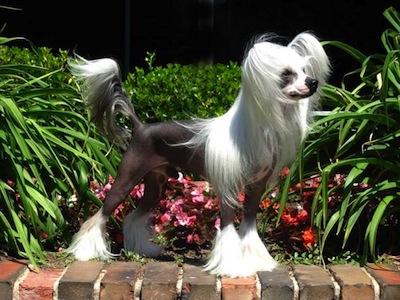 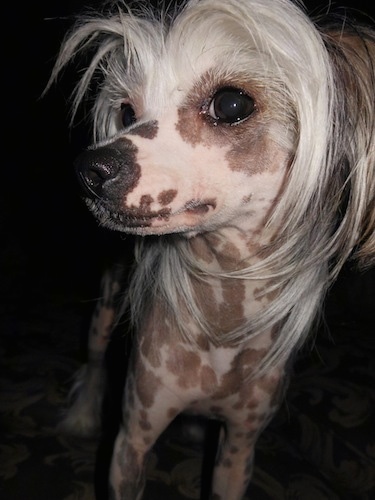 "Shelby is a 6-lb., 11-month-old Chinese Crested from Massachusetts. She loves kids and cats! Her best friend is a Brussels Griffon named Zao; they are the strangest pair you've ever seen!" 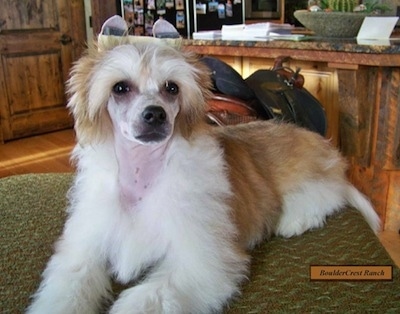 Porky at BoulderCrest Ranch the Chinese Crested Powderpuff puppy at 5 months old—"Porky, as we affectionately call him, LOVES to eat. He is a supreme show prospect. His sire/dam are both champions. He has movement and a coat to die for. He is very loved and adored." Photo courtesy of BoulderCrest Ranch, exclusive breeder of top show-quality Powderpuffs 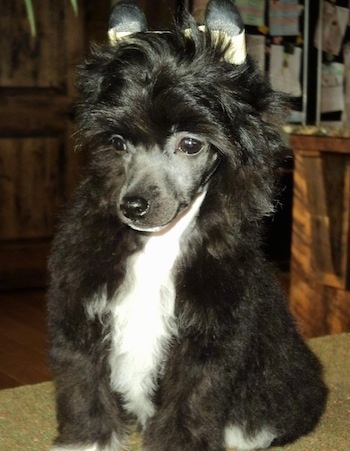