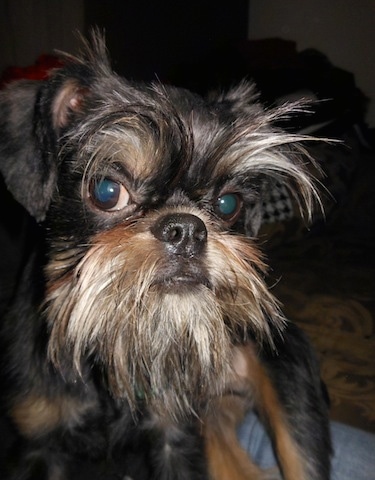 "This is Zao aka "Man." He’s a 10-lb., 11-month-old Brussels Griffon. He has the best mustache you have ever seen. He loves everyone! His best friend is Shelby the hairless Chinese Crested."

The Griffon is a sturdy toy dog that is often thought to look like an Ewok from the Star Wars movie. The large head is round with a domed forehead and a deep stop. The muzzle is very short, appearing to be pushed back. The black nose is very short. The dog has an overbite with a hanging tongue. The black eyes are wide set and prominent with long, black eyelashes. The ears are high set, either cropped or left natural. Natural ears are carried semi-erect; when cropped the ears stand up coming to a point. The straight boned legs are medium in length. The tail is set high and docked to about 1/3 of the length. Note: cropping ears or docking tails is illegal in most of Europe. There are two types of coats, rough and smooth. The rough coat is dense and wiry. On the smooth coat, also called the Petit Brabancon variety, the fur is short, tight, glossy and straight. The short coats are easier to groom. Coat colors include red (reddish brown with a little black at the whiskers and chin), belge (a mixture of red-brown and black usually with black mask and whiskers), black and tan (black with reddish brown markings under the chin, legs, above each eye, the edges of the ears and around the vent), and solid black.

The Griffon is an intelligent cheerful dog with a terrier-like disposition. With lots of personality, it makes a fine companion dog and is good with other dogs and cats. Affectionate, charming, lively and curious, they love everyone. The Griffon cannot live outside in a kennel. If you feed them table scraps, they may become greedy or picky eaters. May be difficult to housebreak. They make good watchdogs and can be taught to perform tricks. Because of this dog’s almost human looking facial expression, they have not only been nicknamed "monkey face," but are prone to being treated as if they are not dogs, but little humans. This causes something called Small Dog Syndrome. The dog begins to believe IT is the ruler of the home, and IT tells ITS humans what they can and cannot do. When a human allows a dog to take over the home, it causes varying degrees of behavior problems, including, but not limited to, willfulness, demanding, obsessive barking, guarding, separation anxiety, snapping and even biting. They may become untrustworthy with children and sometimes even adults. Without enough mental and physical exercise, they will become high-strung, moody and sensitive. These are NOT Griffon traits, but behaviors brought on by the lack of a firm, confident, consistent pack leader, who provides rules they must follow and limits as to what they are and are not allowed to do along with the right amount and type of exercise.

Prone to slipped stifle, eye and respiratory problems. Sensitive to the heat. Not the easiest whelpers; dams often require a cesarean section.

Griffons are good dogs for apartment life and will do okay without a yard.

These little dogs are very active indoors, however, like all dogs, they still need to be taken for a daily walk to fulfill their primal instinct to walk.

The coat of the rough requires a lot of attention, however the coat of the pet dogs may be clipped. The Griffon sheds little to no hair.

There are three varieties of Griffon, the Brussels Griffon, Belgian Griffon and Petit Griffon. The Belgian Griffon has a long, wiry coat with fringe around the face. The Brussels Griffon has a wiry coat that is longer than the Belgian Griffon’s. The Petit Brabancon has a short, smooth coat. The Brussels Griffon was first shown at the Brussels Exhibition of 1880. An early example of the breed is depicted in a Van Eyck, the Flemish painter. Once kept by cab drivers of 17th century Brussels to rid their stables of vermin, the Brussels Griffon became a companion breed by virtue of its appealing character. The smooth coated Petit Brabancon was most likely crossed with Pug blood. Other breeds including the Affenpinscher, English Toy Spaniel, Belgian street dog, Yorkshire Terrier and Irish Terrier may have contributed to the modern Griffons. The AKC recognizes only the variety known as the Brussels Griffon. Its American standard allows all of the color varieties, black through red, as well as the smooth variety (Brabancon). FCI, conversely, divided them into three breeds: smooth (Petit Brabancon), rough reds (Brussels Griffon) and roughs of other colors (Belgian Griffon). Therefore, in Europe they are shown separately with no interbreeding between the varieties. In America, although the same parameters exist, they are combined into one breed with different colors and coat varieties. It was a Brussels Griffon that appeared in the movie "As Good as it Gets." Somewhat rare, Griffons may be very difficult to find. 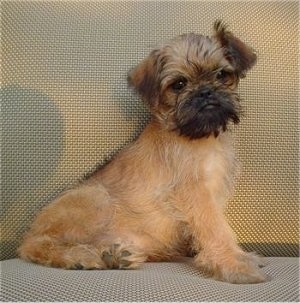 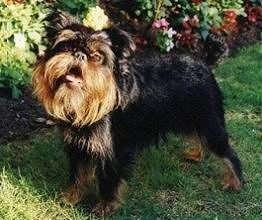 This is Taz, a Griffon Bruxellois. He's a three-year-old black and tan "rough." Photo courtesy of Sherway Griffons—the small dog with BIG attitude! 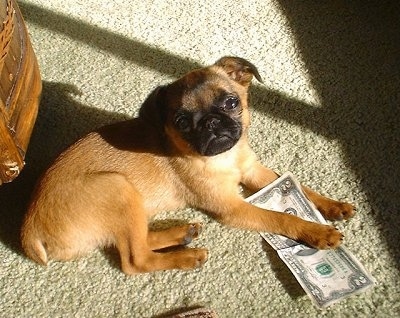 Bella is a Petit Brabancon. 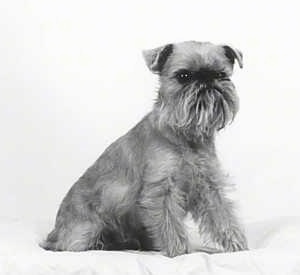 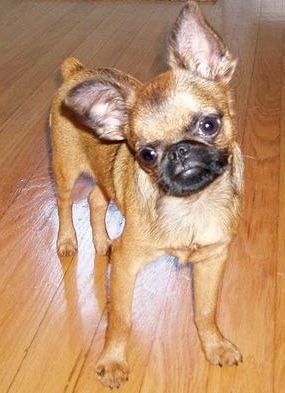