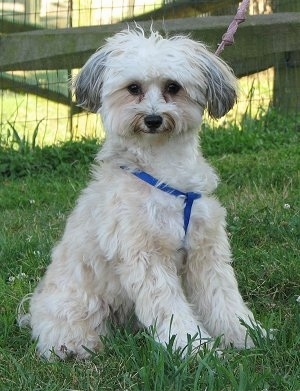 Gracie the Chinese Crested powderpuff all grown up! 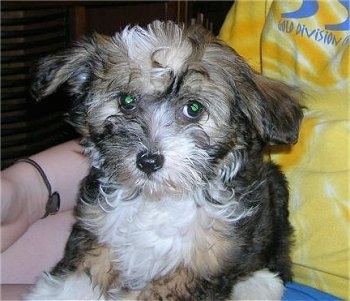 Gracie, the Chinese Crested powderpuff puppy at 3 months old—"Gracie was, when these pictures were taken, only about 3 months old. She was close to 1 lb. 15 oz. and could be held easily in one hand. Everyone loves her, and she loves EVERYONE. She wouldn't make a very good guard dog, and has a bad habit of jumping up to greet everyone (not that they ever notice her little paws on their legs). She's quite an oddity, really, and is very intelligent. All along her left side, her whiskers/claws/paw pads are black, while on her right side they're white. She's got a VERY loving personality and just loves to play ALL THE TIME. When she's tired though, she crashes. Which is actually good, because she's very easy at night and it allows us to let her sleep in my bed with me."See Video of Gracie playing as a puppy 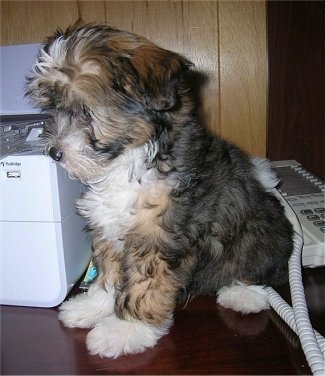 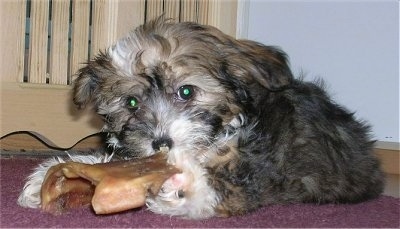 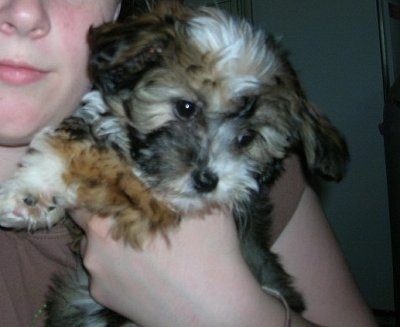 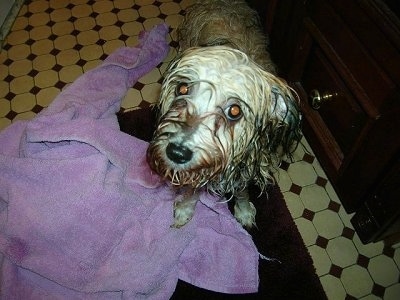 "As she got older, she just kept learning more and more how to...outsmart us. She knows when we're about to leave the house and what that means—crate time. She HATES being in her crate and will bark nonstop as long as she's sure someone is still in the house. Another thing that she hates is—that's right, bath time. We usually give her a bath in the bath tub, and try and make it as painless as possible for her. Quick baths are the best, but because of her hair you really need to use a puppy shampoo and an oatmeal conditioner. It does wonders on her hair. We always make sure the water is just as warm as she can stand, because she always comes out of a bath shivering. Her way of drying off, after we towel dry her as best as we can, is to run FULL SPEED around the living room, doing laps around our ottoman. It's funny because she's so fast."See Video of Gracie running full speed around the house after a bath 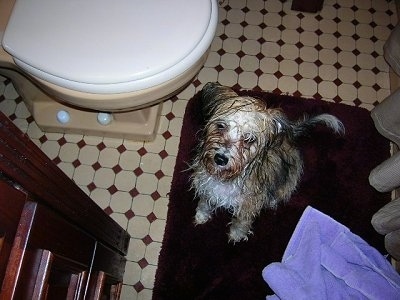 "When we got her first haircut, we were shocked to find that underneath all of that dark brown and black fluff we had come to love was BLOND. My dad had a great time making fun of her, saying, "Oh, that explains it, you’re a blond!" It was weird, but it seemed that the dark colors had only tipped her hair, and she was doomed to be blond once her puppy fur grew out." 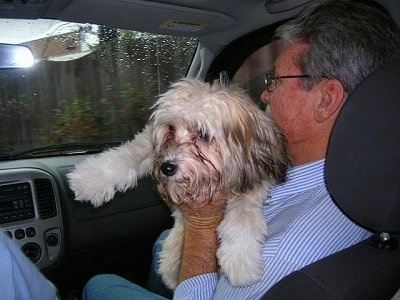 "She's actually just over a year old now, and has become the most loved part of the family. Towards my parents, she's always kinda been goofy and loving. She's allowed on furniture (because she doesn't shed one little bit) and will always get as close to you as she can. When in the car, she tries to be able to get a good view of everyone at the same time, which often doesn't work. She always has a need to know EXACTLY what's going on with everyone. Towards me, she's playful. She knows that I'm the one to go to if she's feeling impish. Her favorite game is fetch in the living room with tennis balls or a rope toy. Just throw it to the other side of the room and… bu-bum bu-bum, she bounces off to get it. Yes, she bounces. I've heard that it's a breed thing, the little strut that she does. She never just walks; it's a big to-do." 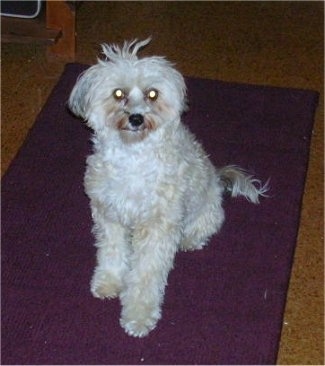 Gracie the Chinese Crested powderpuff at 14 months old— "Some advice for other owners: When they hit teething, watch out. Everything falls victim to their little dagger teeth. We prevented Gracie from doing too much damage by buying some rawhides, or as we call them, Chewys. Gracie just loves her chewys and will lie on the couch for hours just chewing away to her heart's content. Even better, she'll ask you to hold her chewys for her. When my dad went away for business for a few days and came home at about midnight, Gracie was already asleep in his bed with my mom (we share custody) and woke up as soon as she saw him, beside herself with joy that her grand chewy-holder was back! My dad plopped in to bed and was promptly stirred by Gracie throwing a chewy onto his face and giving him this look like "Come on! We have lost time to make up for!"" 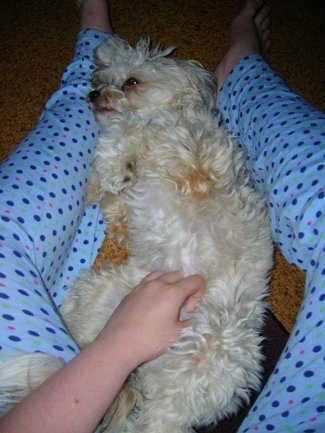 Gracie the Chinese Crested powderpuff at 14 months old enjoying a belly rub—"She loves to run, too. These dogs are big on exercise, and should get to every day. It's the only way to make them content. But then again, Gracie gets tuckered out from a play session in the living room. As for other animals, we have two cats. Neither of them liked Gracie at all, at first. The older of the cats (18 years old) has actually become friends with the dog, in small portions. They play chase and tag and both have a good time. The other cat, only about 9 or so, has become a recluse in pure terror of Gracie. You really wanna keep an eye on these dogs at all times for two main reasons. One, even though she's housetrained, she'll occasionally go and do her business in the other room. We don't have an electric fence for her, but a bell hanging around the doorknob that she rings when she needs to go out. It works like a charm. The other reason is, since she's small, she tends to get under foot a lot. With older people, this CAN prove to be a problem." 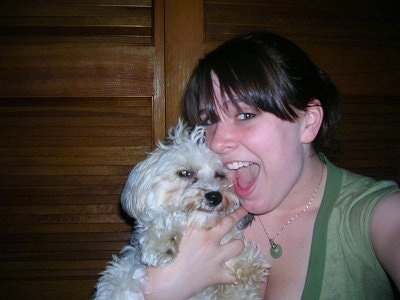 Gracie the Chinese Crested powderpuff at 14 months old with her owner Matti—"That brings up another really important part about Gracie. She just adores the elderly who, in turn, just adore her. We take her out to my Grandmother's assisted living home to visit, but not before making the rounds. The folk there have come to love seeing her and we're thinking about having her become a certified therapy dog. With as much energy as she has, it's impressive to see her at this place. She'll be as calm as can be, often just sitting on anybody's lap who wants to hold her, soaking in the attention. She'll never leave anyone without a quick little lick on the face, though, as I've taught her to give kisses."