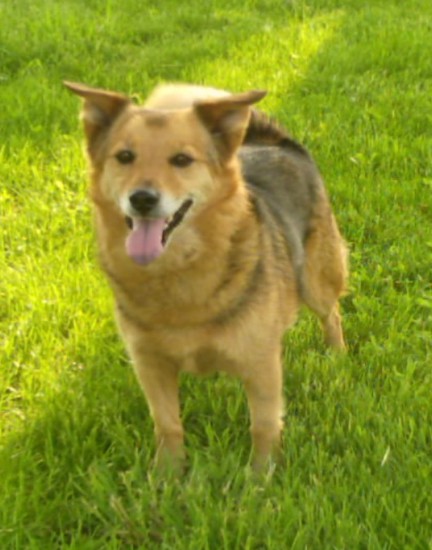 Copper at 11 years old—"Copper is a German Shepherd Dog (father) / American Eskimo Dog (mother) mix. He is the same height as his mother the American Eskimo Dog. He gets along with animals of any breed or size. He absolutely loves kids of any age. We have had him since he was 8 weeks old. I saw his parents so that's how I know what exactly he is. He has the best personality of any dog I have ever had. He loves being petted, carried around, laying on laps, playing with his squeeky newspaper, going for car rides, and unlike most dogs I know he loves going to the vet! When we go to the park he goes straight to the slides, climbs all the way up and slides down, it is hilarious and he has done this ever since he was a puppy."

The Eskimo Shepherd is not a purebred dog. It is a cross between the American Eskimo and the German Shepherd. The best way to determine the temperament of a mixed breed is to look up all breeds in the cross and know you can get any combination of any of the characteristics found in either breed. Not all of these designer hybrid dogs being bred are 50% purebred to 50% purebred. It is very common for breeders to breed multi-generation crosses.