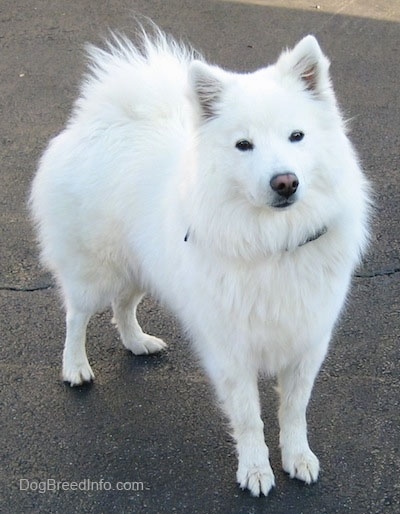 The American Eskimo is a beautiful, small to medium-size Nordic-type dog that looks like a miniature Samoyed. There are three varieties: toy, miniature and standard. That means there is an Eskie for all interests and house sizes. The American Eskimo has a wedge-shaped head with muzzle and skull about the same length. It has erect, triangular-shaped ears, and a heavily plumed tail curled over the back. Its neck is well carried and the topline good and level. Good legs and feet allow the Eskie to trot with bold, energetic action. The profuse coat is always white, or white with biscuit or cream markings. Its skin is pink or gray. Black is the preferred color of its eyelids, gums, nose and pads. The coat is heavy around the neck, creating a ruff or mane, especially in males. The breed is slightly longer than it is tall. The coat of the American Eskimo should not curl or wave; the undercoat should be thick and plush with the harsher outer coat growing up through it. No colors other than those described above are allowed. The eyes must not be blue and no Eskie may be shown if it is under 9 inches (23 cm) or over 19 inches (48 cm).

The American Eskimo is an affectionate, loving dog. Hardy and playful, they are excellent with children. Charming and alert. Because of the dog's high intelligence and its willingness to please, it is easy to train and often ranks among the top scorers in obedience trials. American Eskimos like to work. They are naturally wary of strangers, but once introduced they become instant friends. Eskimos need to be part of the family with a firm, consistent, confident pack leader. If you allow the dog to believe he is the ruler of your home, many varying degrees of behavior issues will arise, Including but not limited to, separation anxiety, obsessive barking, dog aggressiveness, willfulness and guarding. Without enough mental and physical exercise, they can become hyperactive and high strung, spinning in circles. Small dogs have a higher tendency to become the pack leader over humans, because they are small and cute, and oftentimes the humans are oblivious as to what has happened. Read Small Dog Syndrome to find out more.

Prone to hip dysplasia and progressive retinal atrophy. Pay close attention to the eyes and tear ducts. Some are allergic to fleas. This breed can gain weight easily if it does not get enough exercise and/or is overfed.

The American Eskimo will do okay in an apartment if it is sufficiently exercised. It is very active indoors and a small yard will be sufficient.

The American Eskimo needs to be taken on a long daily walk. It will enjoy a safely enclosed yard where it can run free, however it will still need to be taken out for a pack walk to satisfy its migration instinct.

The thick, snowy white coat is easy to groom. Brush with a firm bristle brush twice a week. It should be brushed daily when it is shedding. This breed is an average shedder. 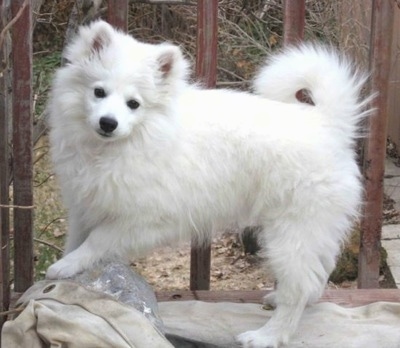