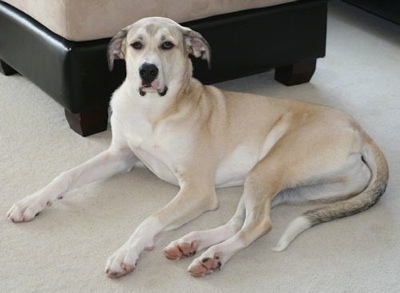 "Duke lying by our couch at just over 1 year old—Duke's mother is a harlequin Dane, and Duke's dad is a Great Pyrenees. He was one in a litter of 10, of which there were numerous merles (grey with black patches and white paws) as well as some white, tan and harlequin puppies. Duke was born entirely white, and matured to what you see in the photos (tan with dark ears and tail, with large white markings on his legs, face, chest, belly and tail). Duke is, by far, the best dog we have EVER owned, and I have owned numerous large and small breed dogs, both purebreds and crosses. He is laid back (even as a puppy he was calm) and intelligent. He's calm in the house, and was very easy to house train. In fact, he is trained to go to the "doggy bathroom" in our backyard (a pit in one corner with mulch in it) and even if he's romping around the yard playing, he will run back to that corner to do his business every time. He is cuddly, and somewhat thinks he is a huge lapdog, with his favorite thing being lying around on our bed or couch while we're sleeping or watching TV. We put him through agility training, to which he really took a liking—and he loves to jump over the obstacles. He loves being out in the snow, although with the shorter hair he can't be out too long in really cold weather. Although he has short hair like a Dane, he also has a double coat, resulting in quite a bit of shedding. We find, however, that it can be controlled with regular brushing and "shedding" treatments at our local groomer. He is protective of our house and family, although not aggressive. His bark is loud and imposing, and when he "puffs out his lips," which are black, he looks quite menacing, which is plenty to keep intruders at bay. He likes playing with other dogs, especially if they'll chase him around the yard or the park, as he loves to run, and covers quite a bit of ground with his long stride. Surprisingly, Duke loves water—even though neither Danes nor Pyrenees are really known as water dogs. He loves to sploosh along in the shallow water (up to his ribs) in giant leaps, but as soon as the water gets deeper he tries to swim back to shallow water. He's even gone lake-swimming with a life jacket that I made for him, which he thoroughly enjoyed. He travels loose in the back seat of our car, and just lies down and looks out the window for most of the trip. He stays in hotels with us, and is the ultimate travelling companion." Picture copyright Christina Langman

The Great Pyredane is not a purebred dog. It is a cross between the Great Dane and the Great Pyrenees. The best way to determine the temperament of a mixed breed is to look up all breeds in the cross and know you can get any combination of any of the characteristics found in either breed. Not all of these designer hybrid dogs being bred are 50% purebred to 50% purebred. It is very common for breeders to breed multi-generation crosses. 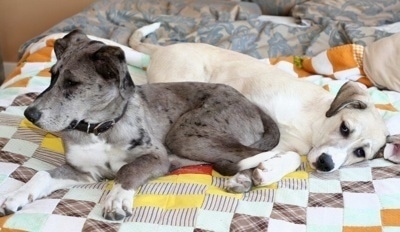 "This is Duke, my 1/2 Great Dane 1/2 Great Pyrenees, and his sister Shelby from the same litter. Both are first-generation crosses. They are 5-month-old puppies in this picture." Picture copyright Christina Langman 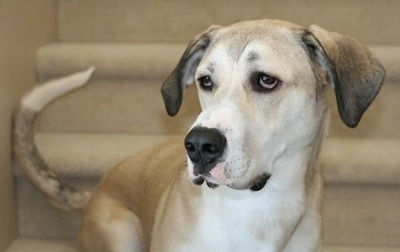 "Duke (1/2 Great Dane 1/2 Great Pyrenees) sitting on our stairs at just over 1 year old. At 2 and 1/2 years old, Duke matured to just under 30" at the shoulder, although due to his poor diet and malnutrition as a puppy (we were his second owners at 4 months of age) and his early neuter (4 months) I suspect he could have grown even a bit bigger. He is tall, long and lanky, and only weighs 92 lbs. He was not born with the Pyrenees dewclaws on his back legs (nor were most of the puppies). He has Pyrenees eyes—large, dark, and "sad" looking, but overall he looks more like a Dane. With the slightly droopy lips he does drool a bit, although not excessively. His tail is enormous, and it can clear off an entire coffee table in one swipe. His giant paws take an XXL in dog boots, and his collar is 20". He is tall enough to walk up to a standard dining table and put his face in your plate without even lifting his head, although he's well behaved enough that he wouldn't actually do it!" Picture copyright Christina Langman 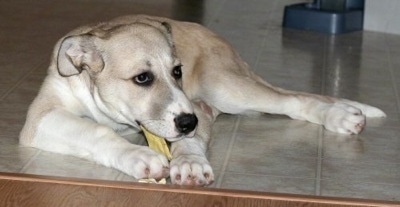 "Duke, my 1/2 Great Dane 1/2 Great Pyrenees at 4 months old, chewing on a rawhide. Ultimately, if a person could clone duplicates of Duke, they'd be a millionaire—everyone loves Duke and everyone who meets him wants one. Surprisingly, even people who don't like big dogs are a huge fan of Duke. We have since purchased a puppy from a breeding of his sister, Misty (not pictured, but similar in appearance to Shelby in the pictures) back to a Great Dane (3/4 Dane 1/4 Pyrenees) and we hope she turns out as fabulous as Duke. Already at 6 weeks old she is calm and playful, and taking to her training well." Picture copyright Christina Langman 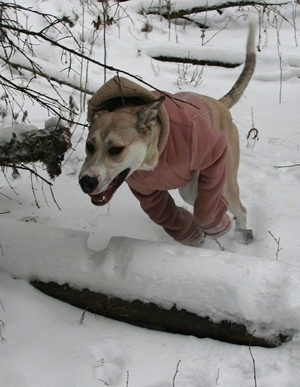 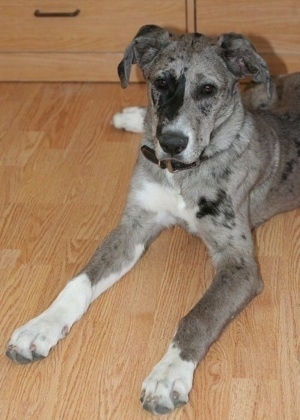 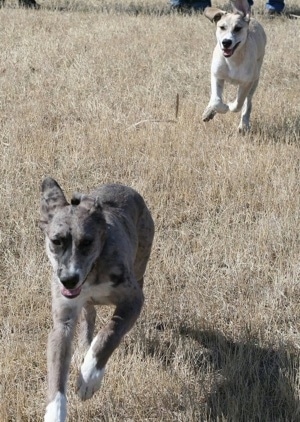