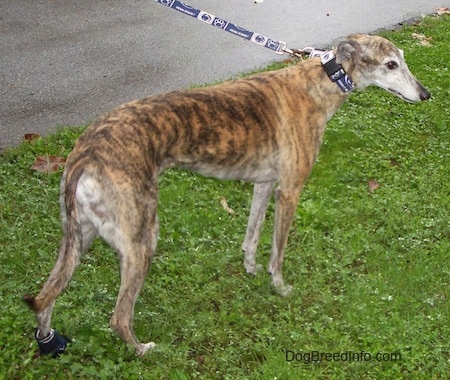 The Greyhound is a tall, slender dog. The head is long and narrow, wide between the ears, with a long tapering muzzle. There is no stop. The small rose ears are held back and folded, and are semi-perked when they are excited. The eyes are dark in color. The slightly arched neck is long. The legs are long with the front legs being perfectly straight. The chest is wide and deep. The long tail tapers with a slight upward curve. The short, fine coat comes in all colors.

The Greyhound is brave and devoted. Intelligent, laid-back, charming and loving, its character is often undervalued because of its reserved behavior toward strangers and even its master. Greyhounds are sensitive to the tone of one's voice and will not listen if they sense that they are stronger minded than their owner, however they will also not respond well to harsh discipline. Owners need to be calm, yet possess an air of natural authority. Socialize well to prevent timidity. As a rule, they are gentle and even-tempered—both racing lines and show lines. Most Greyhounds have a definite prey drive. It is instinctive for these dogs to chase anything that moves quickly. They are extremely fast and some will kill cats and other domestic animals, although this is not the majority (only about 20% of ex-racers are too "keen" on chasing prey to ever be safe with small animals). About 10% are immediately okay due to low prey instinct, and the rest can be trained to leave cats and other small pets in the home alone. They seldom present difficulties with other dogs and are normally good with children, though they do not usually like roughhouse play, and would not be a good choice for young children who are looking for a playmate. Indoors, these dogs are calm and sociable to a point where they can even be considered lazy. They bond strongly with their own people, have tremendous stamina, and do not bark much. Show lines tend to be of a different body style than racing lines, and are often more angulated. Racing lines are bred for performance, but often a good by-product is that they are friendly, outgoing dogs that make wonderful pets when their racing days are over. Greyhounds are not particularly vigilant. Show lines tend to be a bit heavier and bred more for temperament than racing lines, which are bred for speed. However, racing lines also make wonderful pets. There are hundreds of adoption groups all over North America, Europe and Australia to place these gentle, loving dogs when they retire. Retired racing Greyhounds are not usually difficult to housebreak. They are already crate trained from the track, so it doesn't take them long to learn that they are not to "go" in the house. The Greyhound needs an even-tempered, gentle but firm loving owner who knows how to consistently communicate the rules of the home. A Greyhound that knows his place in his pack and what is expected of him is a happy Greyhound.

Prone to bloat. It is better to feed them 2 or 3 small meals rather than one large one. They are sensitive to drugs, including insecticides. It is said that they are also prone to hypothyroidism, however it is also believed that a Greyhounds' thyroid levels are naturally lower than most dogs and many people put them on unnecessary treatment for hypothyroidism - at much harm to the dog - upon recommendation from an uneducated vet. There is only one way to truly confirm if a greyhound actually has hypothyroidism, and that is to have a complete thyroid panel done (Michigan State University thyroid panel). There is an excellent book by Cynthia Branigan, "Adopting the Racing Greyhound", which has a whole chapter on it.

The Greyhound will do okay in an apartment if it gets enough exercise. It is relatively inactive indoors and a small yard will do. Greyhounds are sensitive to the cold but do well in cold climates as long as they wear a coat outside. Do not let this dog off the leash unless in a safe area. They have a strong chase instinct and if they spot an animal such as a rabbit they just might take off. They are so fast you will not be able to catch them.

Greyhounds that are kept as pets should have regular opportunities to run free on open ground in a safe area, as well as daily long, brisk walks, where the dog is made to heel beside or behind the person holding the lead. In a dog's mind the leader leads the way and that leader needs to be the human. Greyhounds love a regular routine.

Litter size varies greatly in this breed. From 1 to 12 puppies with the average of 8 born in one litter.

The smooth, shorthaired coat is very easy to groom. Simply comb and brush with a firm bristle brush, and dry shampoo only when necessary. This breed is an average shedder.

This very ancient breed is the fastest dog in the world and can reach speeds of over 40 miles per hour (65 km/h). Carvings of the Greyhound were found in tombs in Egypt dating back to 2900 B.C. They are thought to have originally descended from the Arabian Sloughi and brought to England by traders before 900 AD. The breed was first brought to America by the Spanish explorers in the 1500s. They were one of the first dogs ever to be shown in a dog show. The Greyhound’s natural quarry are the rabbit and hare, however it has also been used to hunt stag, deer, fox and wild boar. The dog’s speed along with its keen eyesight helped it excel at its work. The dogs were able to chase and catch the pray without stopping to rest. Today there are two types of Greyhounds being bred: Show lines, which conform to the written standard and racing lines, bred for speed. After retiring from a racing career, these dogs were often destroyed. With the dedicated efforts of Greyhound Rescue this practice has greatly reduced and the most mellow-tempered Greyhounds are found homes. The Greyhound was recognized by the AKC in 1885. The Greyhound’s talents include hunting, sighting, watchdog, racing, agility and lure coursing. 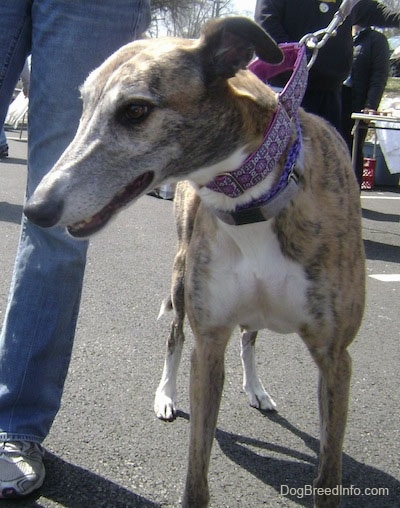 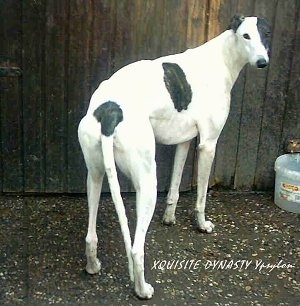 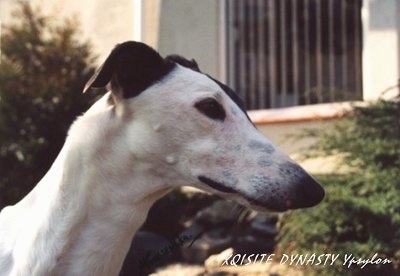 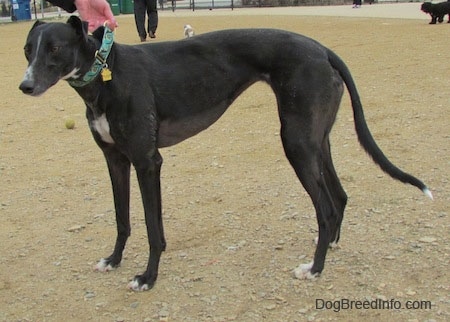 Snowy the Greyhound at 2 years old—"Snowy is a former race track dog. She was put up for adoption because she was not winning her races."

Lexy the female purebred Greyhound at 3 years old. She was trained for racing, but never competed. She was adopted by her current owner from a racing dog rescue facility.

See more examples of the Greyhound