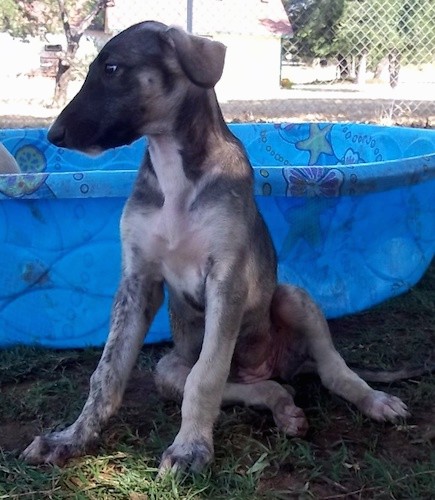 "This is my new puppy named Rigel. He is a four month old Lurcher puppy. He is a Saluki / Borzoi / Irish Wolfhound / Afghan Hound mix. I got him from the SPCA in Muskoka, Ontario. I named him after one of the dogs from the manga Ginga Densetsu Weed Orion. Rigel was the second youngest of four puppies named Sirius (oldest) Orion (second oldest) and Bellatrix (youngest). Rigel likes to play with my four year old Kishu Ken, Akame. Rigel loves to play in the mud. I have a lot of mud in my backyard and today when I got home from work I took him out back and he had the time of his life! When I took him back inside I had to give him a bath! Rigel is an awesome dog and I could never ask for a better puppy:)"