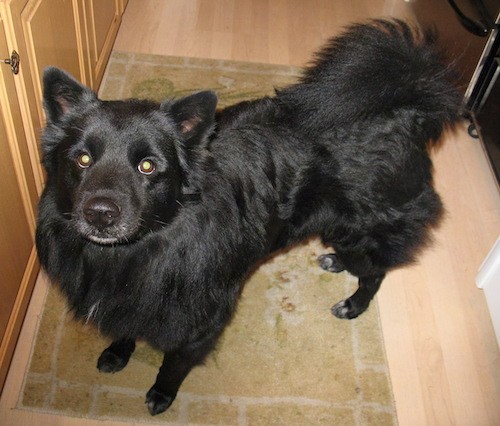 This is Bear, my Croatian Sheepdog / Chow Chow mix breed dog. He has a black spot on his tongue from the Chow. He was a feral dog; if there is such a thing because he had not been around people and was not tame. I fed him for over a year before I could get close to him or touch him and that was only because he saw me petting another dog. He thought I must be okay if that other dog was letting me pet him. After that he became a part of the family. He was still very afraid of other people, and it took a long time for him to adjust to different people coming to my house. He would panic in fear and try to run and hide. But, now he loves to see company coming, as he gets bored with just me all the time.

He is a wonderful dog; sweet, friendly, very good-natured, inquisitive, energetic, intelligent and playful. He also smiles. I would like to have a picture of him smiling, but if he sees the camera he won’t do it. It is just precious. He smiles just like people do with their teeth showing. He was about six years old when he came to my house. He had been wild all of his life as far as I know. The dog catchers tried to catch him for a long, long time, but never could.

His bad habit is that he likes to get out of the yard and go places because he was always free and now he can’t be free and also live with me because of laws about animals. He should be on a farm really; he would love that.

He loves the cold weather. I saw him sleeping out in an ice storm, and then go get into a tub of icy water that I caught from rainwater. You could see the steam rising off of him while lying in the water. I couldn’t believe what I was seeing. He likes going in water a lot. His fur is soft as silk and very long on his back. He picks up leaves and stuff in his fur though, which he brings into the house all of the time.

I had to train him not to bark so much, and he has learned to not bark at night at least. (Mostly, anyway) That took a long time to do. I wish he had someone to play with him. I am too old to do much of that these days. He has a lot of energy and needs to do things to use all that energy. I guess he needs some sheep to herd.