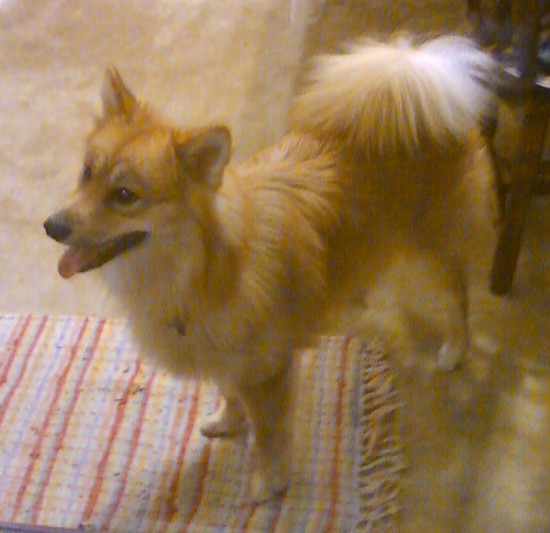 Smokey the Finnish Spitz at 2 years old—"Smokey was a stray that we found running the streets of a near by neighborhood. We took him in and gave him a home. We found the old owner and they said he was too much work and they really did not want him back. They said he was a handfull and got out all the time. Smokey is very hyper and loves to be very vocal. He has so many traits that a Finnish Spitz has. When we first got him I did some research and Finnish Spitz is the most dominant breed in his mix. They love to be vocal and they are very high strung, they also get really attached to one person usually their trainer. I am the one who found Smokey and he never leaves my side. He is very affectionate and very smart when he wants to be. He catches on to tricks and obedience training very quickly, that is only if he feels like it. He knows how to do so much but no matter how much training I have done with him he still only does it when he wants to." 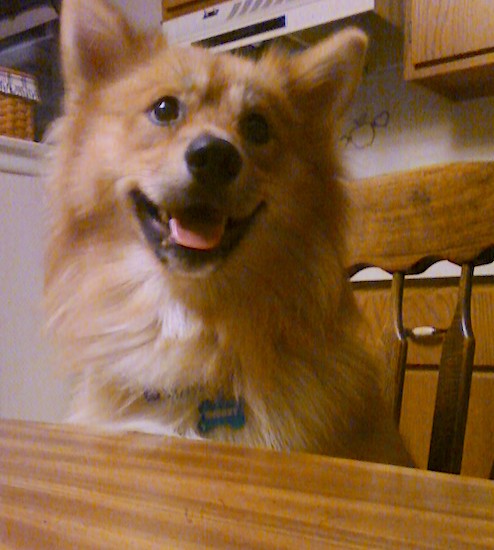 Smokey the Finnish Spitz at 2 years old—"Unfortunately I do not think I would ever trust Smokey off the leash in an unfenced area. He gets along great with the other male dog we have, who is a Golden Retriever, but when we take Smokey on walks he barks at every dog he sees like he has never seen a dog before. A lot of people have told me he has the face of a Pomeranian. A Finnish Spitz breeder says he has Spitz traits and structure but his fur is way too long to be a full bred Spitz. We have taken him to a couple different vets just to see if they could give us an idea of what other breeds they think he might be. None of them were completely positive about their answers. I have become so attached to this little guy. He is a big part of my family."